The Textilforum was founded to bring practitioners of all textile crafts together, to compare notes and to learn from each other. Following the success of the first Textilforum, held in Eindhoven in September 2009, this year’s was held in Schnalstal, in South Tyrol, the German-speaking part of Northern Italy from 6-12 September. The venue was ArcheoParc, a museum dedicated to the recreation of the environment and artefacts of Ötzi the Iceman who had been discovered higher up the valley in 1991. We were welcomed on the first day by Karl Josef Rainer, the Bürgermeister of Schnalstal, Joanna Neiderkofler, the Director of ArcheoParc, Sissi Prader, the President of Museumsverband Südtirol and Alexander Rainer, of ArcheoParc Museumsverein.

The aim at its inception was for it to become an annual meeting, moving around Europe in successive years.

The venue was ArcheoParc, a museum dedicated to the recreation of the environment and artefacts of Ötzi the Iceman who had been discovered higher up the valley in 1991. We were welcomed on the first day by Karl Josef Rainer, the Bürgermeister of Schnalstal, Joanna Neiderkofler, the Director of ArcheoParc, Sissi Prader, the President of Museumsverband Südtirol and Alexander Rainer, of ArcheoParc Museumsverein.

The theme this year was the question: what defines a textile? The participants travelled from throughout Europe to explore this question, take part in workshops and attend lectures on subjects ranging from prehistoric textile construction techniques to the replication of post medieval garments and the study of contemporary living history such as the procurement and use of shoe-hay. There were as many approaches to textile as there are words to describe it and participants specialised in the selection of materials, the techniques of manufacture and the finished artefact.

This year’s Textilforum had a more formalised timetable. The mornings were free for discussion and the practising of new techniques. The afternoons saw a series of workshops and a programme of lectures were held in the evenings. The first lecture was the outcome of the spinning experiment last year, presented by Katrin Kania. A number of delegates had been awaiting the presentation with keen anticipation! On successive days lectures were given in twined knitting by Viktoria Holmqvist, stone tools for fibre preparation by Linda Hurcombe, stone-age fibre techniques by Anne Reichert and the recreation of the clothing of Gunnister Man by Martin Ciszuk and Lena Hammarlund. Each of these lectures was well received. The study of the Gunnister Mann was interactive: to recreate the clothing accurately it was necessary to create new garments then to destroy them in the same way as the originals. Martin Ciszuk, a tailor who specialises in historic reconstruction, took to this task with a meticulous thoroughness that was much admired. An open discussion was held on the penultimate evening asking, what defines a textile? There was a vast difference of opinion and it was felt that to define such a broad question too closely would cause a loss to the subject as a whole.

The workshops were well attended. The textile manufacturing techniques included developing a deeper understanding of tablet weaving, courtesy of Christina Grünefeld and Miakki Karisto, stone-aged techniques including twining by Anne Reichert, hollow form felting by Sabine Ringenberg, filet netting by Katrin Kania, twined knitting by Viktoria Holmqvist and Nålbinding by Harma Piening. Couched work was taught by Reia Chmielowski. How to make a one-piece shoe was taught by Katrin Koch-Maasing with a preliminary talk on their history beforehand. The social history of shoe hay was revealed by Ellinor Sydberg during a workshop and lecture. The final full day saw an exhibition and sale of items brought by participants and Anne Reichert presented a lecture on stone-age techniques to the public. The workshops took place either in a glass-sided classroom or in the open air in a reconstructed building. This meant that they were open to the public, who stood back but freely asked questions, and so added to the life of the museum.

The meeting was not all work! We were surrounded by beautiful scenery and took the opportunity to go up and stand on the glacier at the top of the valley. Participants spent the mornings hiking and sightseeing. On the final evening the Schnalstal community held a dinner in our honour in a medieval house, the oldest in the valley. The end of the week saw the annual herding of thousands of sheep from the Austrian summer pastures to their winter pastures in Italy, an event that attracts visitors from all over the region and which is of keen interest to any textile enthusiast.

Textilforum 2010 was organised by Katrin Kania and Sabine Ringenberg and held at ArcheoParc following an invitation from Joanna Neiderkofler. The aim at its inception was for it to become an annual meeting, moving around Europe in successive years. Textilforum is now well established and all of the participants are looking forward to next year’s event. 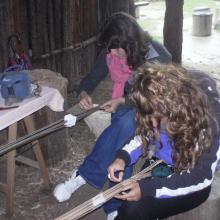 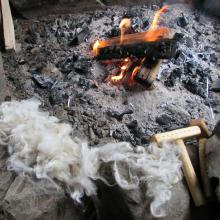 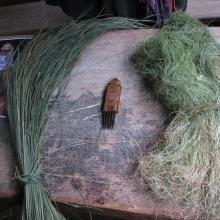