The second annual Reconstructive and Experimental Archaeology Conference was held at the Schiele Museum of Natural History, Gastonia, NC, 16-17 October, 2011 and was attended by over 50 participants representing at least 10 states, two countries and an unknown number of general museum visitors.

This year the board also instituted the Fire Keepers Award, recognizing those individuals who make a significant contribution to REARC and/or the fast growing field of reconstructive and experimental archaeology.

We were extremely fortunate to have Dr Nick Dixon serve as our Key Note speaker. Dr Dixon is the chief excavator, designer and current director of the Scottish Crannog Centre located on/in Loch Tay, Kenmore, Scotland. Dr Dixon delivered a very informative, exciting and highly entertaining description of both the on going under water archaeology efforts, descriptions of excellent preservation conditions and the resulting structural reconstruction efforts. Check out their website at www.crannog.co.uk.

The purpose of the Reconstructive and Experimental Archaeology Conference is to promote and stimulate interest in reconstructive and experimental archaeology; to support and facilitate an active and open exchange of information between all related groups; to serve as a bond among those interested in this and related subjects; to publish and to encourage publication; to advocate and to aid in the conservation and development of related data; and to encourage an appreciation, high standards, development and support for the scientific application of reconstructive and experimental archaeological research.

The final day was opened with a round table discussion on Teaching Experimental Archaeology in the Academic Setting and was conducted by Dr Bill Schindler.

Dr Errett Callahan, originator and designer of the Cahokia House reconstruction, gave a final slide presentation documenting the history and design of the Cahokia House Reconstruction Project. The slide collection and some associated materials are now housed in the permanent collections of the Schiele museum. This year the board also instituted the Fire Keepers Award, recognizing those individuals who make a significant contribution to REARC and/or the fast growing field of reconstructive and experimental archaeology.

This year’s Fire Keeper Award was presented at the annual Ground Breakers Dinner to Dr Ann Tippit in recognition for her (and the Schiele Museums) on-going support of REARC. The Schiele Museum has again offered to host next year’s conference, which is scheduled for October 19-21, 2012. Keep an eye out for details as they develop at www.rearc.us. 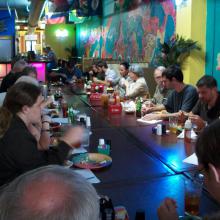 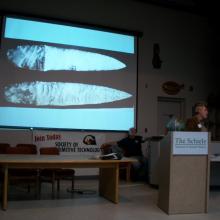 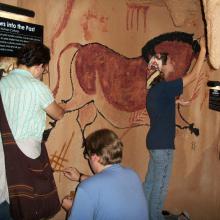 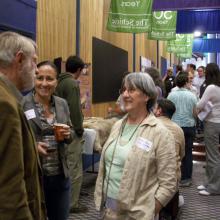