The International Conference on archaeological open-air museums and experimental archaeology: An Opportunity for the Promotion of the Tourist Industry, sponsored financially by the Norwegian Financial Mechanism, was held in the Carpathian Troy Open-Air Archaeological Museum in Trzcinica, Poland, on 9 – 10 June 2011. The Conference was organised as part of the project entitled The Carpathian Troy archaeological open-air museum, Trzcinica: An Opportunity for the Development of Tourism and was attended by over 50 persons from Poland and abroad, representatives of various scholarly disciplines and professions. Papers were delivered by archaeologists, regional and cultural geographers, experts on the tourist industry, and conservation specialists.

Particular attention was drawn to the location of archaeological open-air museums and parks with respect to archaeological sites, and to the need for maximum accuracy in reconstructions of prehistoric realities.

25 papers were delivered, presenting the operations of existing open-air archaeological museums and parks, as well as projects for the creation and development of new archaeological open-air museums. Speakers stressed the scientific and educational character of experimental archaeology, which also has a significant potential for the growth of the tourist industry. Many papers emphasised the economic and tourist aspect of such research centres and their impact on regional development.

The Conference was opened by Jan Gancarski, Director of the Sub-Carpathian Museum, Krosno, who also read the paper sent by Professor Jerzy Miziołek of Warsaw, who was unable to attend. Professor Miziołek’s paper presented a generalised picture of the operations of archaeological open-air museums in various countries, with reference to a number of renowned examples, such as the ruins of Troy. The second paper, by Zygmunt Kruczek from Kraków, was also general in character and presented the principal European archaeological open-air museums, together with an account of the methods for the evaluation and management of tourist sights.

The next papers focused on specific case studies. Jarosław Fraś and Marek Skubisz from Wieliczka, and Marek Materna and Katarzyna Fludzińska from Bochnia presented the archaeological park known as the Six Ploughmen’s Settlement in Bochnia. Artur Jedynak and Kamil Kaptur from Ostrowiec Świętokrzyski and Marek Zalewski from Warsaw gave papers on the prehistoric banded flint mines at Krzemionki Opatowskie near Ostrowiec Świętokrzyski. Jan Gancarski presented the Carpathian Troy Open-Air Archaeological Museum in Trzcinica as an example of how an archaeological heritage site may serve to enhance the tourist industry. Jana Gryc from Brno and Ondŕej Tůma from Český Těšín in the Czech Republic presented the archaeological open-air museum at Chotěbuz-Podobora. Danica Staššíková-Štukovská from Nitra, Mária Kotorová-Jenčová from Hanušovce nad Topľou and Renáta Beličová from Žilina, Slovakia delivered papers on archaeo-musicology. Ladislav Olexa, Ján Kavulič, Dana Kavuličová and Ján Rákoš presented the project for the Myssle archaeological open-air site which is to be set up at Nižná Myšľa near Košice, Slovakia, to display the spectacular archaeological artefacts associated with the Otomani-Füzesabony Culture discovered there.

Szymon Orzechowski, Andrzej Przychodni and Daniel Czernek from Kielce spoke about the Nowa Słupia centre for experimental archaeology and the events that have been organised there for many years. Magdalena Wałaszewska, Justyna Kuriga and Justyna Orłowska from Toruń presented the activities of the Society for Experimental Prehistoric Archaeology of the Nicolaus Copernicus University of Toruń. Experimental archaeology was also the subject of papers delivered by Katarzyna Pyżewicz from Poznań and Witold Grużdź from Warsaw. Jacek Górski from Kraków spoke on the educational activities conducted by archaeologists from the Nowa Huta branch of Kraków’s archaeological museum. Anna Kacprzak from Kazimierz Dolny and Kamil Prachowski from Lublin discussed the archaeo-tourist potential of the Lublin region, especially the Żmijowiska Hillfort, which is a branch of the Muzeum Nadwiślańskie in Kazimierz Dolny. Piotr Szmyd from Jasło presented the results of a questionnaire on the tourist preferences of Jasło residents as regards the Carpathian Troy Open-Air Archaeological Museum. Joanna Kozakiewicz from Kraków discussed the significance of marketing in the promotion of archaeology, and Marek Stawski from Warsaw presented the contribution the archaeology of Great Moravia may make to education and the tourist industry. Michał Paleta from Poznań outlined the impact historical reconstruction and re-enactment may have on Poland’s archaeo-tourism. Paweł Madera from Wrocław demonstrated a new way to present the early medieval history of Wrocław thanks to state-of-the-art computer technology.

The papers presented at this Conference and a Conference on The Application of Experimental Archaeology in the Reconstruction of Prehistoric Realities will be published in 2012 in a volume of proceedings.

Tomasz Leszczyński is from Sub-Carpathian Museum in Krosno, Poland.
All photos by Krzysztof Rodak. 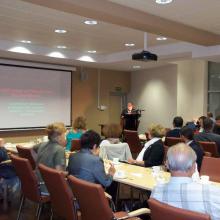 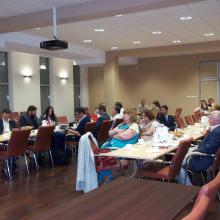 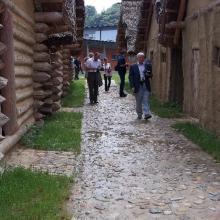 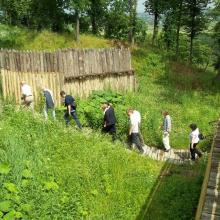 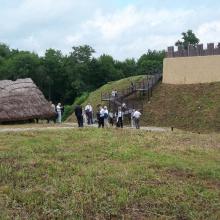