For four days in Burgos (Spain) 235 people from 15 countries gathered for the fourth, and most international thus far, Congress of Experimental Archaeology, organized by EXARC, Experimenta, the Museum of Human Evolution, and the Universidad Autónoma de Madrid.

One of the most applauded discourses was given by Margarida Genera, who spoke about the recovery of the forgotten sound of the bells between the third and first century BC located at archaeological sites of the Ebro River.

During the two days of scientific sessions 80 papers and a dozen posters were presented. The conference then culminated in a spectacular and fun visit to the archeological sites and the Archaeological Park of Atapuerca, where conference participants met with the technicians of the Atapuerca Foundation. There, the participants were able to put into practice live techniques of building tools, such as making flint knives or bifaces, practice bronze smelting, or have the opportunity to produce fire with bows and wooden shafts or understand the evolution of hunting techniques using javelins, propellers and bows.

Amongst the lectures, which were updates of pilot programmes in the field of experimental archaeology, participants were able to hear topics as varied as anything having to do with the human species: some groups presented the results of their investigations into the reproduction and use of Neolithic bows, others, on the analysis of stone projectiles, the study of axes and hoes in working wood, the skinning or quartering of animals, the durability of materials used in the past, prehistoric diets or the recreation and the use of topographical material from Roman times.

One of the most applauded discourses was given by Margarida Genera, who spoke about the recovery of the forgotten sound of the bells between the third and first century BC located at archaeological sites of the Ebro River. Their sound returned to resonate in human ears thanks to her work of reconstruction.

However, the past is not at contradiction with the present, or even the future.  Eudald Carbonell, one of the co-directors of the archaeological sites of Atapuerca, has said, "We must know the past to propose the future". And the future appears full of technology and communication.

Linda Hurcombe (Exeter, UK) suggested that touching modern replicas of ancient objects, thanks to the reproductions produced using 2D and 3D prints made from laser scans, can be an important part of visitor experience. She recalled that “Please Touch” is a welcome sign in any museum.

Video game enthusiasts will have a chance to play  ‘Prehistory’, an educational game about a Paleolithic hunter-gatherer, introduced by Juan Simón García.

In this sense, the journalist Javier San Martín, a PhD student in social communication at the University of the Basque Country, recommended the use of certain resources of the radiophonic language such as analogies, examples or anecdotes, to archaeology professionals, as support to build a discourse to stimulate the audience, in his paper entitled "The challenge of transmit and listen the silent voice of stones in the 21st century".

The conference also included a display of the use of different types of drills manufactured by humans throughout history, making the most of a temporary exhibition that you can visit on the ground floor at the Museum of Human Evolution.

The program of the Congress included a guided tour to the Museum of Human Evolution. The participants not only saw and learnt about the history of some of the important pieces unearthed from the Burgos fields, but also, thanks to the expert guidance of one of the professional guides, about the complicated architectural game developed by its designer and builder, Juan Navarro Baldeweg, to reproduce the sierra de Atapuerca within its walls, and make the visitor forget the city of Burgos.

The Fifth Congress of Experimental Archaeology will be in Tarragona in 2017, and will be organized by the Catalan Institute of human Paleoecology and Social Evolution (IPHES). 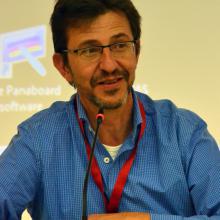 Fig 1. Javier Baena in the closing… 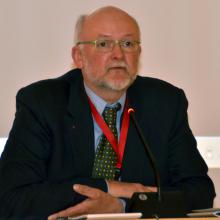 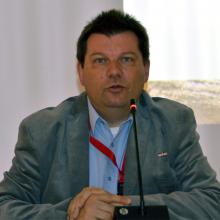 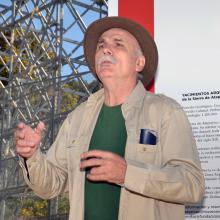 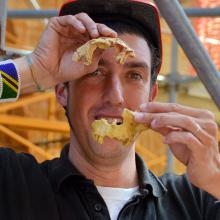 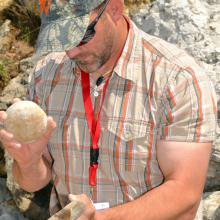 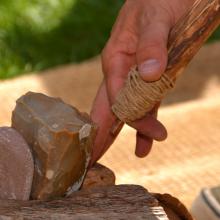 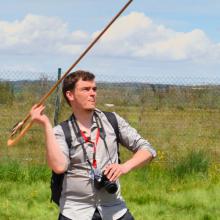 Fig 8. Practicing with javelins and… 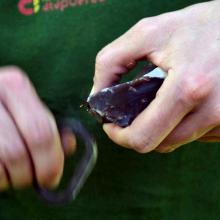 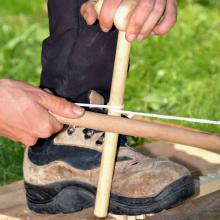 Fig 10.Ready to make fire with… 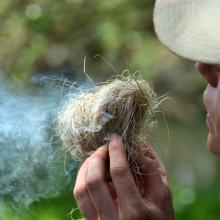 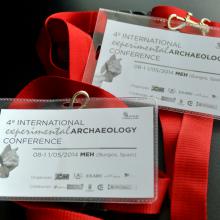