All of the papers and posters were characterised by a strong connection between scientific research and experimental archaeology, showing how the formulation of clear research questions and the application of scientific rigour in experimentation can lead to improvement in the understanding of past technological, economic, and social behaviours and to a correct and effective transmission of knowledge to our society.

This discipline is especially informative in prehistoric research where the lack of several categories of documents and the high fragmentation of data has promoted this experimentation as scientific method ( Coles, 1979; Baena and Terradas, 2005; Aubry et al., 2008; Brenet et al., 2013). However, the role of experimental archaeology is also central to the study of ancient antiquity and historical periods. It allows a beneficial method for the reconstruction of procedures and processes of which there are few archaeological evidences, as well as to test hypotheses related to economic and social dynamics (Cuomo, 2007). Living history plays a fundamental role in scientific communication to the general public and in the formal scientific training of young students. The scientific significance of putting the past in contact with the present through the knowledge of past resources and techniques and, consequently, of past economic and social behaviours, also has an experiential value allowing people to experience past society as it happens in open-air museums (Paardekooper, 2013-2015).

As highlighted by Reynolds (1999), is important, from an academic point of view, to avoid confusion between ‘experiment’ and ‘experience’. According to the author ‘experience’ is the process by which people do something. In this way, they learn the nature and application of different technologies. For example, to manufacture a tool is an experience. It allows the verification of whether some of the final artefact’s features were related to human choices or due to specific physical constraints of raw material. Furthermore, it allows researchers to propose hypotheses to be tested through experiments and to select the variables most adequate to test these hypotheses (Romagnoli et al., 2016).

‘Experiment’ is a scientific procedure designed to test a hypothesis. It is a tool of modern positive science (Popper, 1959) meaning that if at the end of the experimentation the hypothesis avoids falsification it can be considered valid and used in future investigations until falsified and replaced in a dynamic process. Obviously, in experimental archaeology, reality is simplified and the ‘actualistic’ approach implies that available materials are used to replicate past phenomena (Outram, 2008). This contradiction is only apparent and not relevant if the materials used are pertinent to the hypothesis, and if the information needed to postulate the working hypothesis and to perform the experiment originated from processed archaeological data. In this respect, what it is important to stress is that the quality and reliability of experimental results are based on the preservation of the archaeological context - and the quality of excavation - which guarantee that the studied context is homogeneous, the detail of data recording in the field, and of empirical analysis and a significant number of finds.

In the first session discussions were aimed at exploring prehistoric tools from different viewpoints: taphonomy, production sequences, functionality and cognitive issues. The session included a paper on experimental butchery with shell tools as proxy for the adaptation of ancient humans to coastal habitats, and one talk on marrow extraction processes.

In the second session further case studies were presented on Palaeolithic stone tools focussing on taphonomy, kinetics and functional issues, and a contribution about analysing sickle-gloss to discern plant processing methods. In this session was also a presentation on the experimental studies of ornament shell perforation and a pilot project on the experimental reproduction of dental striations.

The third session included presentations on the taphonomy of pollen, residue in flint tools, Epipalaeolithic processing of rabbit carcasses, and the grinding of stone tools. Two further projects were presented: one designed to study learning mechanisms in flint knapping, and the other focused on the dissemination of the scientific processed behind prehistoric  activities and techniques in an open-air museum in northern Italy.

The fourth session was devoted to discussing the creation of experimental protocols in the investigation of several topics. They included the mobility range in sheep and goat pastoralism, the typology of pottery used for bread baking, the Mesolithic and Neolithic lithic industries, the processes behind ceramics firing, the method for excavating Neolithic hypogaea in the  Western Mediterranean and, finally, the learning processes involved in the manufacturing of marble bracelets at the Cortijo Cevico quarry in the Granada region of Spain.

The fifth session was divided between experimentations aimed at solving scientific matters in the understanding of metallurgy and pottery manufacturing in recent prehistory, including kilns, and the application of experimental archaeology in the scientific communication of museum collections to the public (Geological Museum, Mexico), cultural heritage (Morocco), and the improvement of cultural outreach in schools and for families.

The sixth session was devoted to the investigation of the Roman period, from technological aspects (lanterns), to architecture in communal (circus) and private spaces (Roman villa), and even the consumption of charcuterie. One presentation discussed the application of digital reconstructions of archaeological sites to use as virtual tours of ancient monuments. Another paper discussed how to approach the study of Roman period games as an engaging method to improve the knowledge of everyday Roman life and to garner the interest of children and young adults alike.

In the seventh and last session  papers discussed both archaeological issues in the medieval age (Couronian cremation burials, metallurgy, and Carolingian wood towers) and the potential for reproduction in didactic activities for the general public.

Several workshops and practical activities were arranged for the last day of the Congress. They included handmade work with palm leaves Prehistoric lithic knapping, works with tendons, hide and several vegetables fibres, the production of Magdalenian bullroarers, the perforation of red dear antler and wood working, the use of bows, the use of airbrushes for rock art, the functioning of Iberian iron locks, and the development of a Roman Republican military march. The activities were held in a hangar at the Port of Tarragona. During the morning, the practical demonstrations were an opportunity for participants in the Congress to discuss scientific issues, methodological protocols, and to share their personal experiences. Antoni Palomo, from the Museu d’Arqueologia de Catalunya, concluded the morning session with a talk about the long tradition of experimental stone tool knapping in Spain. During the afternoon, workshops were opened to the general public.

All of the papers and posters were characterised by a strong connection between scientific research and experimental archaeology, showing how the formulation of clear research questions and the application of scientific rigour in experimentation can lead to improvement in the understanding of past technological, economic, and social behaviours and to a correct and effective transmission of knowledge to our society. Between the presenters, there were both experienced scientists and many young researchers. The great turnout of new generations of archaeologists and the large chronological range covered by the presented researches displayed not only the growing importance of experimental archaeology, but also how deeply this discipline is an integral part of current archaeology at a global scale. In this respect, the high number of works aimed at improving experimental protocols and creating reference collections, as well as the multitudinous new projects in which experimentation is a foundational piece of research and divulgation, was remarkable. As in the previous conferences, the symposium was a platform for discussion for researchers who were applying similar methods to their experimentations. For three days they shared knowledge, experiences and experiments related to prehistoric and historical contexts and behaviours. The Congress was a successful event with relevant contributions and included a great participation of the general public in the open activities, reaffirming the importance of experimental archaeology in experiencing the past not simply for experts, but for the whole society. 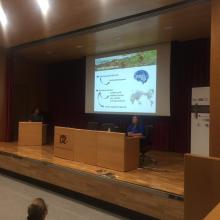 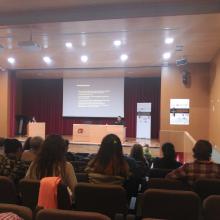 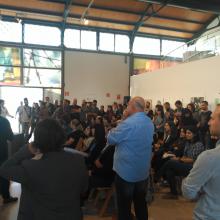 Fig 3. Presentation in the hall. Photo… 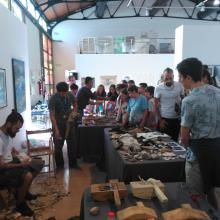