Prehistoric Dressing for Third Millennium Visitors. The Reconstruction of Clothing for an Exhibition in the Liptov Museum in Ruzomberok (Slovakia)

There can be various reasons for reconstructing clothing for museum purposes. The most frequent one, as in the case of this paper, is to improve and liven up an exhibition with 3D models (Hendszel et al., 2008), which present the fashion culture of individual periods, nationalities or specific regional features to the general public. Clothing as a source of knowledge itself gives us information on several factors. The technological development in textile production, the climate of a given historic period, the social status, gender or ethnicity of the bearers and many other aspects. It was and still is an important part of everyday culture, which is reflected in it. Anyone who participates in the reconstruction of historical clothing must try to capture the past faithfully, based on all accessible sources, archaeological, iconographic and written, and the current state of the art (Krištofová and Urbanová 2010, p.113).

Anyone who participates in the reconstruction of historical clothing must try to capture the past faithfully, based on all accessible sources, archaeological, iconographic and written, and the current state of the art.

The Liptov Museum in Ružomberok closed its permanent archaeological exhibition in 2017 in order to rebuild and modernise it. They informed about the project and the content of the future exhibition on the museum website and in short articles . To increase the interactivity of the exhibition and to bring it closer to visitors, they decided to add the reconstructions of six costumes: the clothing of a hunter from the Upper Paleolithic, the clothing of a woman from the Eneolithic, and that of a high-ranking woman from the Late Bronze Age and the clothing of a Celtic family (See Figures 1 - 4). The reconstructions were supposed to be based as far as possible on local finds and to reflect period materials and techniques.

Clothing of the Bronze Age

One of the displays in the future exhibition is the reconstruction of the clothing of a high-ranking Lusatian Urnfield Culture woman from the area of western Slovakia, that is from the Late Bronze Age (around 1,000 – 900 BC). The clothing of the Lusatian Urnfield culture is not a very frequent topic in Slovak archaeological literature. In fact, only M. Novotná has dealt with this subject (Novotná, 1986, pp.149 - 159), followed by E. Makarová in her MA dissertation (Makarová, 2008, p.2010). All three sources were used in order to create the clothing, as well as the material collections of the Liptov Museum in Ružomberok and consultations with a specialist working in the museum, S. Sliacka. As we can see from the sources, the combination of individual jewels for the women of the Lusatian Urnfield culture varied and we are unable to trace any rules in their use together (Makarová, 2008, p.109). As well as rare grave finds, mostly finds of female jewellery from hoards were used for the reconstruction.

The cut of the basic dress from the Late Bronze Age in the area of western Slovakia unfortunately remains a great mystery. Known finds of clothing from the Nordic environment consisting of several pieces come from the Middle Bronze Age (Broholm and Hald, 1940), as well as the find of a single-piece dress in a peplos style from Pustopolje in the Balkans (Benac, 1990, see Figure 6.; Grömer et al., 2013, p.235, see Figure 13.). Since the area of our interest inclined more towards the north and north-western part of central Europe, we chose for this reconstruction two-piece dress consisting of a large skirt made from woollen cloth, tied up and draped at the waist, in combination with a tunic also made of woollen cloth. The cloth was hand-made and its thread count matches the finds of cloths of medium quality from the Bronze Age (6 threads/cm2, classification according to Grömer, 2010, p.120). The upper dress was girded with a belt and an apron.

The belt was woven from wool yarn on a tablet loom using square tablets (See Figure 5). The oldest evidence of the use of this technique comes from Europe, from the end of the Bronze Age. Square bone tablets with dimensions of roughly 3.5 – 3.7 cm were found on the Mühltal I. site; their bodies were decorated with carved concentric circles. Their dating goes back to the Late Bronze Age (Grotte, 1994, p.149). Older finds of the edges of clothes from the Schwarza cemetery, which were identified by H. Farke as made on a tablet loom (Farke 1993, p.111), are not unequivocal, so we cannot confirm the use of this technique in older periods (Müller and Wiering, 2012, p.128).

The apron, attached to the belt, was sewn from wool cloth and it is decorated in the lower part with embroidery made of naturally dyed woollen yarn. Bronze Age embroidery is known from the site Irgenhausen (Grömer et al., 2013, p. 232, see Figure 10.).

Although we have no direct evidence of this technique from Slovakia, the finds of bronze needles of various sizes in settlement contexts of Lusatian Urnfield culture (Makarová, 2008, pp.68 - 69) point to the fact that the crafts of tailoring and embroidery were known.

These diadems from Liptovské Sliače, made from four-sided coiled wire terminating in four rosettes, are some of the most opulent head decorations from the given period (Novotná, 1984) and area. Since they are located in the depository of the Liptov Museum in Ružomberok, one of them was photographically documented by the curator and made from bronze by R. Lukůvka at a scale of 1:1. The circumference of the diadem is about 47 cm, which is the dimension of a new born baby’s head. Since the circumference of an adult’s head is roughly 51 to 64 cm, we cannot assume that the diadem was worn simply on loose hair. Furthermore, its weight would have caused it to slide down constantly. To make a reconstruction of headwear containing the diadem, we used a felt bonnet with a veil and the diadem was firmly sewn to the bonnet.

Felting is a very simple technique used for processing sheep’s fleece with the use of warm water and pressure, and almost any shape can be made with it. We have felt fragments from the Bronze Age, from the Behringen site in Lower Saxony (Müller-Wiering, 2012, p.130). A splendid bronze panel, found in a female grave in Franzhausen, Austria, showed evidence of being attached to a bonnet, also probably made of felt (Grömer, 2007, p.140), in combination with a soft cloth with a striped pattern, probably a veil.

The question remains as to the location of the decorative feature: the rosettas.  Novotná dealt with the way the diadems were worn (Novotná, 1984), and E. Makarová in her dissertation did the same (Makarová, 2008), but the position of the decorative features has never been successfully clarified. Besides the option of placing the diadem directly on hair without any fastening, there are basically four options (See Figure 6.): the rosettas are, together with the hook and loop, turned backwards (top left), the rosettas are on the back part of head, but turned downwards (top right), they are turned then forwards and create the dominant feature of the headwear (bottom left). The last possibility is to incorporate the diadem into more complex headwear (bottom right). Although E. Makarová inclines in her work, by means of schematic reconstructions, towards the option of wearing the rosettas turned downwards (Makarová, 2008, p.11, see Figure 21.), practical attempts have pointed to the fact that the incline of the rosettas makes this adjustment impossible. Since we know nothing about the shapes or sizes of headwear of the Late Bronze Age, in order to create the headwear correctly, see Figure 6 bottom right, we chose the option with the rosettas turned backwards for the overall reconstruction.

A cloak covering the upper half of the back and chest appears in several variants – from glabrous sewn skins to furs –  as part of clothing, roughly from the Middle Bronze Age (Ebbesen, 2006, p.42). Short, sewn cloaks made of sheep skin were found on the bog site of Borremose; their dating goes back to the Late Bronze Age and Hallstatt Period (Ebbesen, 2006, p.42; Hald X, p.315, see Figure 365 - 366a.). Our cloak was designed in the same shape, however, for reasons of time and finance, it was produced using wet felting. The wool for the cloak was hand-cut and shorn from the sheep of the Ouessant breed (See Figure 7), which is close to the archaic Scottish Soay breed of sheep. Sheep from the Late Bronze Age present, according to the latest analyses, a similarity with the above-mentioned species (Grömer and  Salliari 2017, pp.135 - 136). The cloak is open on the chest and fastened to the clothing with two needles.

A pair of massive bronze needles was cast on the basis of the study of original finds from Bešeňová (Kurti, 1930). Their position on the shoulders, on the outer clothes, is given by their size, functionality as well as visual appeal. These needles probably fastened the uppermost part of the clothing made of rougher cloth, skin, or fur and pointed to the bearer’s social status.

In the Late Bronze Age, we can find protective cases for needle tips made of bronze (Makarová, 2008, p.78), however, we cannot exclude their production from organic materials, for example bone, wood or hide, which did not survive and which have been used in our reconstruction.

Since the people of the Lusatian Urnfield culture cremated their dead, we unfortunately do not have at our disposal any archaeological sources which might clarify the position of the needles and the way in which they were attached to the clothing. Because of this, we have to look for parallels with other, older and more recent historical periods.

A pair of long bronze needles was found, for example, in the female skeletal grave no. 2 on the Pitten site in Austria (Grömer et al., 2013, p.223, see Figure 2.) dated to the Middle Bronze Age. In the photograph of the find situation, we can clearly see the position of the needles with their heads pointing towards the waist, and their tips pointing towards the shoulders. Iconographic sources dating from several centuries later – black-figured styled pottery – are still showing women (and goddesses) wearing a peplos fastened on the shoulders with fibulas with protective pads where the position of needles is the same as in the grave in Pitten: heads facing downwards. This detail is clearly visible for example on the black-figure style krater made by Kleitias and Ergotimos dated to the 6th century BC (Furtwängler and Reichhold, 1904, Pl. 1.; Harizius-Klück and Fanfani 2016, p.73, see Figure 5.3). The experiments we performed with the needle fastenings for our reconstruction also showed that if the needles were facing the opposite direction, this would be very uncomfortable for the bearer.

The last parts of the clothing are armbands and bracelets. Although the massive twisted armbands are the dominant feature of female dress, in the area of Slovakia we find them mostly in hoards. This is the case of the model we used: bronze armbands from Liptovské Sliače. The bracelets that we used for the reconstruction are from the site Lúčky (Veliačik, 1982, taf. XLV: 12,13). They are not primarily female paraphernalia and can be found consistently in the graves of men, women and children; however, we wanted to show the jewels of the Late Bronze Age in all their glory, so we included some of them in the reconstruction.

Harlizius-Klück, E. and Fanfani, G., 2016. (B)orders in Ancient Weaving and Archaic Greek Poetry. In M. L. Nosch, M. Harlow and G. Fanfani eds. Spinning Fates and the Song of the Loom: The Use of Textiles, Clothing and Cloth Production as Metaphor, Symbol and Narrative Device in Greek and Latin Literature.Oxford. pp. 61-99. 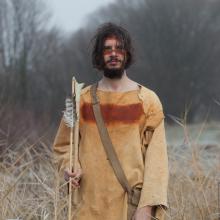 Fig 1. The clothing of a hunter from… 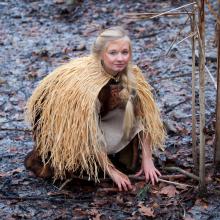 Fig 2a. The clothing of a woman from… 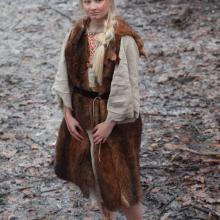 Fig 2b. The clothing of a woman from… 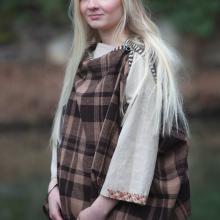 Fig 3. The clothing of a Celtic girl… 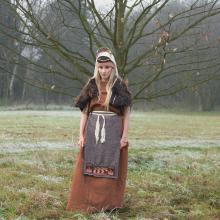 Fig 4a. Overall view of the…

Fig 4b. Overall view of the… 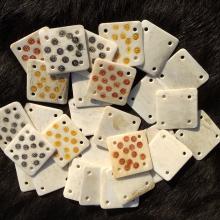 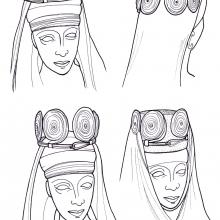 Fig 6. Possible ways of wearing the… 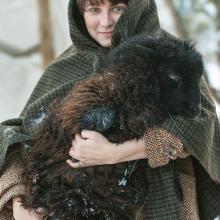 Fig 7. The Ouessant sheep, bearing the…