Kernave Archaeological Site – the Place for Experimental and Living Archaeology

Kernavė is one of the most picturesque places in Lithuania. Five hill-forts surround the wide valley of Pajauta. This place has always been visited by people not only for its sights but also for its aura of the distant past. Ever since people in Lithuania became more interested in history, Kernavė has been a symbol of the grandeur of Lithuania’s past.

It attracted researchers back in the 19th century, but only since systematic archaeological research started in 1979 has the depth and breadth of this place’s history been revealed. People started settling here in the final Palaeolithic and continued living here until the Middle Ages when, in 1390, the then thriving town of Kernavė was burned down and settlement ceased in the Pajauta valley.

An Archaeological Open-Air Museum in Kernave

Wet turfs in the Pajauta valley preserved the remains of the medieval town of Kernavė. In 1986, during construction works, machinery unearthed remains of a wooden building. This started a 9-year (until 1995) investigation of an area covering 1753 m2 with a cultural layer about one meter deep, remains of walls and floors, fences, street paving and thousands of artefacts that can be attributed to the interior. Two homesteads were fully excavated, and one partially excavated, showing the craft specialization of the owners. Bone and antler material was concentrated in one homestead, together with tools and other items related to bone carving and production from birch bark. Material for jewellery making together with other items related to that craft were discovered in another totalling 2 thousand items related to both of these crafts. The third partially excavated homestead revealed items that might be related to blacksmithery (Baltramiejūnaitė et al., 2017, 33).

Soon after these discoveries were made an idea was tabled to reconstruct a fragment of a town ex situ. However, this idea was only implemented in 2015. The reconstruction of a fragment of the 13th and 14th century town was opened in 2016. It is based on the discoveries in Pajauta valley in the 1980s and 1990s, augmented with the further research in other places in Kernavė at the beginning of the 21st century (See Figure 2).

The axis of this reconstruction is a street with three homesteads along it. Thick high fences surround the street and the homesteads.

Each yard represents a craft that is known from archaeological research: bone carver, jeweller and a smith. The main idea of this archaeological open-air museum is to represent these crafts in their original surrounding.

Most of the reconstructions in the archaeological open-air museum are based on the archaeological data from Kernavė. The homesteads are encompassed by fences made from upright planks (about 1.8 m high) or intertwined branches. Each homestead has one or more auxiliary buildings – workshops, animal sheds and other. Reconstructed yards also have workshops with details for the particular associated craft (See Figure 3).

However thorough the research might be, and however well preserved the artefacts might be, some data cannot be gathered from the archaeological discoveries. The majority of the data was compiled from finds in Kernavė, but there were gaps in the archaeological record, for example, remains of a roof structure was found only in one house. This was probably due to the fact that the town was burned down the majority of the roofs were destroyed. As such, it had to be assumed that all of the buildings had similar roof construction: that they were made from split planks. The height of the houses was also not known, so the height of the house is based on average height of the medieval inhabitants of Kernavė – 168 cm (Jankauskas, 2002, 59). Some of the details of the construction methods or the homestead interiors could not be found in Kernavė, so they were made as per extant finds from the same region (for example rafters were made in the style observable at Vilnius Lower Castle (Striška 2004)).

The concept of archaeological open-air museums and experimental archaeology (in a wider sense) were barely known to the public in Lithuania – archaeological open-air museums were known only in the neighbouring countries of Latvia and Poland. Experimental archaeology, on the other hand, started as a movement incorporating various craftsmen and enthusiasts - mostly from museums and academic institutions - who were interested in ancient technologies. However, this movement did not take shape and form until the 1990s when almost simultaneously two museums (Trakai Historical Museum and Museum-Reserve of Kernavė) started organizing experimental (living) archaeology festivals.

From the very beginning the festival encompassed prehistoric and medieval archaeology. The first was dedicated to representing the crafts of stone and iron ages, while the latter focussed mostly on crafts relating to the medieval town of Kernavė. During the last few years, medieval crafts are represented in the territory of the archaeological open-air museum, while prehistoric crafts are displayed at its outskirts (See Figure 7).

Living archaeology and experimental archaeology come together in an archaeological open-air museum and although they mingle they do not mix together, but rather give their own values to facilitate better understanding and better interpretation of the Archaeological Site of Kernavė.

About the Author:
Andrius Janionis is Museum Researcher at State Cultural Reserve of Kernavė 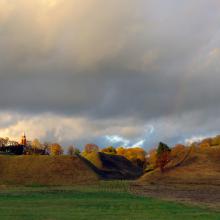 Fig 1. The view from the Pajauta valley…

Fig 2. An Open-Air museum at Kernavė.… 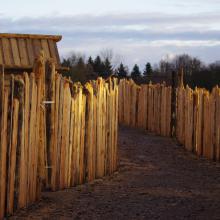 Fig 3. A street view of a reconstructed… 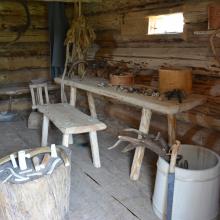 Fig 4. The interior of a bone carver’s… 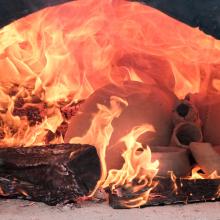 Fig 5. Burning pottery in a kiln during… 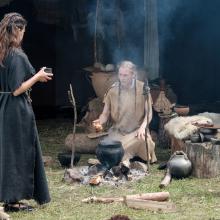 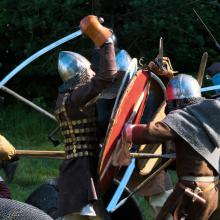