In July 2018 a group of students from the UK participating in the Placements in Environmental, Archaeological and Traditional Skills (PEATS) Erasmus + Work Placement,attended the Kierikki Stone Age Centre, Pahkalantie, Finland. Part of that training included experimental / experiential projects that were coordinated by Dr. Peter Groom of the Mesolithic Resource Group.

Due to the lightweight nature of the coracle, it was easy to work and meant that one section of gunwale could be laced at a time, while the opposite gunwale and hide could be submerged in the lake, retaining moisture and flexibility.

During the week previous to this experiment, the same group of students had built a skin-on-frame canoe, so the decision was taken to build an alternative lightweight craft. Examples of lightweight water-craft are widespread, with instances from North and South America, Europe and northern Russia, Africa and Asia (Hornell, 1946). The use of skin-boats in the British Isles was common.

The plant materials used throughout construction reflect those of the area, alder (Alnus sp.) and willow (Salix sp.). The skin for the coracle was from an elk (Alces alces) and elk rawhide was used for making the lashings. Steel hand-knives, a steel awl, and a pruning saw were also used.

Experimental construction
At the outset, there was no plan other than to work with the natural materials that were available in the area. Thus, the materials and resources would dictate the size and shape of the completed coracle. This ‘organic’ approach, enabled an amount of creativity to enter into the construction process; no kits, no brought in pre-cut timber or pre-prepared skin, just a reliance on what was locally available.

The first stage of the coracle project was to procure the resources. All the materials for the basketry frame were harvested by hand from the Kierriki site. The most suitable were willow and alder. However, willow was in short supply, therefore alder provided the bulk of the material for the frame. Rods of 3-4m long and 2cm width were required, while the weavers were 1-2m long and 1cm width. It was key that these rods and weavers were consistent in form, so that the frame was as tight and smooth as possible, and less likely to pierce the skin. The bark was left on all of the alder but removed from the willow for aesthetic purposes.

To begin with, an unworked elk skin was laid on the ground. Two of the long alder rods were placed on this and were shaped and tied into an oval, taking care to gauge the potential size of the coracle frame, accounting for the curves and bottom. The alder hoop was then laid on the ground in the work area, ensuring that one end of the oval had a flatter profile. This would be the fore end (front). Using the ground as a clamp, the butts of 14 alder rods were pushed into the ground at regular intervals around the edge of the hoop. The butts were tied to short pegs to prevent the rods from moving in the soft soil during the later weaving process, which would place tension on the frame. These alder rods were then bent over and tied to create the ribs (hoops) of an upside down ‘basket’ (See Figure 1).

After all of the rods had been bent and tied to the opposite rod with strips of elk rawhide, whippy alder weavers were used in a pairing weave to create two sections of strong basketry weave. Rather than weaving a complete basket frame, just the two sections were completed; one at the gunwale (top) and one near the draft (base). The reason for this being that a complete weave increases the weight of the coracle, whereas our approach created strong areas where they were most needed but limited the overall weight. In this way, the coracle could be easily carried and handled by one person. Approximately 80 weavers were used. Throughout this process, rocks were used to weight the base of the coracle; otherwise, the tensions that developed in the frame during weaving could push the base upwards creating a keel, which was not a feature of traditional coracles (Hornell, 1946; and see Figure 2). When the weaving was complete, the port (left) and starboard (right) sides of the coracle were tied together with rawhide strips to prevent the sides from falling open. Stripped willow rods were added at this point, which added lateral strength and provided a colour contrast. Thwarts (bracing rods) made of alder were then attached at two points (See Figure 3) in order to prevent the coracle sides collapsing inwards.

Throughout the time that the coracle frame was being constructed, an elk skin had been soaking in the shallow water of the lake margin to soften the membrane and loosen the hairs. Warm water temperatures meant that the skin was ready for working after five days, the flesh, membrane and hair were removed fairly easily (See Figure 4).

When the hide was finished, it was once again immersed overnight in the lake margin to regain flexibility. The following morning the now flexible hide was stretched, as tightly as possible, over the coracle frame to allow for shrinkage on drying, and then pegged into the ground (See Figure 5). This meant that the hide could semi-dry to shape, making the attachment procedure easier. During construction, temperatures often reached in excess of 30° C, meaning that all the materials and rawhide lashings had to be regularly soaked to maintain or regain flexibility. Therefore, the skin was attached to the coracle gunwale (top rim) at the lake edge (See Figure 6). Due to the lightweight nature of the coracle, it was easy to work and meant that one section of gunwale could be laced at a time, while the opposite gunwale and hide could be submerged in the lake, retaining moisture and flexibility. The hide was pulled over the gunwale and secured in place using rawhide lacing, using an awl to make the lace holes. No treatment, such as tar, was added to the hide. Overall, approximately 10 metres of rawhide strips were used. Strips ranged from 1cm width for the lacing, to 3cm width for the stronger lashings. Procurement of the alder and willow, the weaving, lashing and addition of thwarts on the frame took just under three days to complete, with two people on this activity. The hide work took one person one day, while lacing the skin to the frame took two people one day. The production of rawhide lashings was ongoing.

In order to prevent the paddler’s feet pushing on either the coracle frame or the skin when in use, a flexible footboard was added, similarly, a flexible seat was created. Both were made from short sections of stripped willow rods lashed together with rawhide, which meant that they were pliable. Due to their flexibility, these could be placed to accommodate the paddlers preferred body position (See Figure 7). Lack of time meant that a rough paddle had to be quickly made from a broom handle and some plywood.

‘Calypso’ was trialled by India McDermott, a seasoned canoeist. India was able to steer the coracle well using the typical figure-of-eight paddle motion, even in a strong headwind through choppy water. Calypso sat high in the water providing plenty of freeboard to protect the paddler and was very steady, proving to be lightweight, manoeuvrable, easy to handle and effective (See Figure 8).

This project served to illustrate several points. By electing to make a skin-on-frame coracle using what might be available locally and without an initial plan, it demonstrated what is achievable when relying on the local environment as a provider. All of the plant material was sourced on-site and used within days of harvesting. Apart from stripping the bark from the willow, which was purely for aesthetic reasons, the bark was left on the alder as it was considered unnecessary to remove it. The amount of rawhide required to make the lashings reinforces how important cordage (of any kind) is. Limited hand tools were used during the manufacture; a small pruning saw and hand knives were sufficient. What was more important was the steady pace of work. Taking time to watch the materials as they bent or stiffened, understanding the necessity of rehydrating materials, then using the drying process to shape the materials and working with them to maximise their efficiency.

Overall, the project demonstrated how simple it is to create an effective lightweight watercraft from just 14 alder rods, 80 alder and willow weavers, 10m of rawhide lashing, and one elk skin.

Maclennan, M., 1995. A pronouncing and etymological dictionary of the Gaelic language. Edinburgh: Acair and Mercat Press. 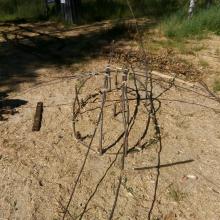 Fig 1. The initial frame. The butts of… 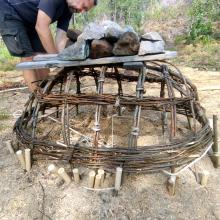 Fig 2. The upside down coracle with… 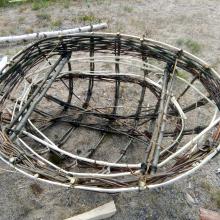 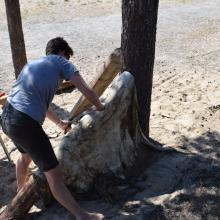 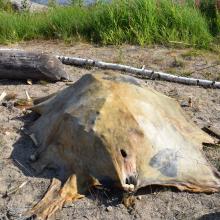 Fig 5. The finished rawhide after… 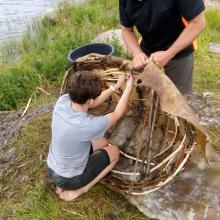 Fig 6. The rawhide being laced onto the… 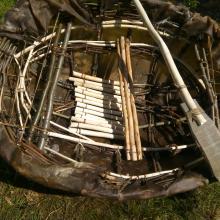 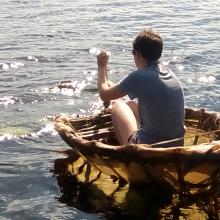 Fig 8. India taking Calypso for the…

From Gastonia to Gotha: My Thoughts and Impressions on doing Museum Work
Book Review: Determining Prehistoric Skin Processing Technologies by Theresa Emmerich Kamper
Birch Bark Glue and its Potential Use in Neanderthal Clothing: A Pilot Study
The Prometheus Project
Roar Ege: The Lifecycle of a Reconstructed Viking Ship