This Conference was organised by the TRC Leiden and the Knitting History Forum in Leiden. On the 2nd of November 2019 I had the opportunity to visit Leiden to take part in the Knitting History Symposium. What follows are my notes and observations and therefore may not accurately reflect what was said. I am very much hoping that the different papers will with time be published and made accessible.

The Citizen Science project involved knitting test swatches with different types of silk, some already de-gummed, some still containing the sericin, and using different size needles, to find the right material and gauge for the reconstruction. The stocking to be reconstructed was made from reeled silk, not spun silk, and knitted in the round.

The keynote lecture of the symposium recounted the reconstruction of the 17th century Texel stocking by a Citizen Science Community led by Chrystel Brandenburgh. The goals for this project were to involve people not normally part of archaeological research but who have the expertise needed to create a reconstruction, in this case experienced knitters, and to be able to repeat the experiment.

The Citizen Science project involved knitting test swatches with different types of silk, some already de-gummed, some still containing the sericin, and using different size needles, to find the right material and gauge for the reconstruction. The stocking to be reconstructed was made from reeled silk, not spun silk, and knitted in the round.

After the test swatch stage about 40 people continued with the experiment of knitting stockings, and as of the date of the conference 27 stockings were finished. Knitting with the silk still containing the sericin proved easiest and quickest, and blocking the stocking after removing the gum produced the most uniform result.

We can’t tell how long it would take to knit a stocking in period but those knitters who made more than one stocking reported that the time it took to knit the second one was almost half of the first, showing how much the process was speeded up by familiarity with the material and the technique.

Also discussed was the meaning of the term Citizen Science, and what difficulties and highlights the project was experiencing.

The following papers were all connected to the Texel Stocking project, with the first group  about stocking production in Europe, showcasing current research in knitting history: Lesley O’Connell Edwards’ “A hidden workforce: hand knitters in 17th century England” focused on evidence of who was knitting and what was being knitted: caps, gloves, petticoats (short jackets), stockings or hose, and waistcoats. Silk hand knitters are mentioned in 1619 but there is not much more information.

Sylvie Odstrcilova’s paper “Early modern stockings from the Czech Republic and neighbouring countries: The story continues” offered a fascinating glimpse into the variety of extant stockings in this area, and built on her research published in NESAT and ATR. Her findings of the similarity of the stockings of Imrich Thurzo in Orava Castle to the Texel stocking opened questions regarding manufacture and import of silk stockings throughout Europe.

Hanna Backstrom’s paper on the earliest printed knitting patterns, what they looked like, who they were made for, and how they compared to a hand written 17th century notebook, possibly from a knitter’s workshop, was one of the highlights of the conference for me.

The first afternoon section was dedicated to projects inspired by the Texel Stocking project:

Art Ness Proano Gaibor’s “Dye experiments on the Texel Stocking” was an interesting paper on how period dye recipes can have an impact on our modern lives, and how diverse the period recipes for dyeing black were, some doing more harm to the fabric than others.

Geeske Kruseman’s report on wearing 17th century knitted silk stockings with period reproduction shoes had some results that really surprised me. The experiment was cut short, but the stockings showed no signs of wear after an accumulated 139 hours of use, kept their shape after washing, and were comfortable to wear in hot and cold weather. Everyone with the right foot size (European 38) got a chance to try the stockings at the end of the conference, and I personally loved the experience! It would be interesting to repeat this experiment with a wider range of participants.

Sally Pointer reported on her experience of making a replica based on the Texel stocking, using a 19th century knitting machine, for the re-enactment market. Having to alter the key features to work with the much smaller stitch count possible with the knitting machine, reducing the patterns produced by the purl stitches by about one third, and producing a clearly different stocking, her key question was that though we can do it, should we? How much can we learn from something that is clearly removed from the original? Her stocking was beautiful, and of course much quicker to produce than the hand knitted ones, but it still leaves the question how it would compare to both non-patterned machine knit silk stockings and the replica hand knitted ones.

The last section were papers based on Citizen Science projects:

In her paper titled “How not to knit: Sourcing silk, research and reconstructions reviewed” Susan North shared with us her insights into the problems and mistakes encountered when making reconstruction silk stockings for the Original Practice at the Globe Theatre, and how difficult it was to find any information on tools, materials, and methods.

Jane Malcolm-Davies’ paper “Modern Slavery and the early modern work ethic: Lessons learned from volunteer participation in knitting in early modern Europe” recounted her experiences with the volunteers in the Knitting in Early Modern Europe (KEME) project, and explored how using volunteers in knitting, a notoriously underpaid work activity, raises the question to what extent Citizen Science is exploitative, and how much can be learned from the knitwork produced and the process of knitting it. The focus has to be on what the benefits are for the volunteers as well as the researcher/scientist, and it is interesting that the KEME volunteers listed a similar range of benefits as the Texel stocking project participants.

The panel discussion followed along similar lines, and I loved the new to me emphasis on the social aspect of taking part in a Citizen Science project, the importance of being mindful of the nature of these experiments, and the necessity of mutual benefits, for the researcher and scientist as well as the volunteer.

Volunteering is walking a narrow path between the fulfilment of participation and exploitation of participants, not only in Citizen Science projects, and I was happy to see how much that was in the forefront of the papers. The conference has hopefully also raised awareness on how the analysis of knitting and other textiles is equal in importance to analysing woven fabrics, and textiles in general in comparison to other materials.

My biggest thank you for a wonderful conference has to go to all that took part in the Citizen Science project, for making their experiences and work available to a wider community! I’m taking the short cut of reading about their experiments and experiences, and having a finished pattern to follow, or follow all the information now available for my own take on it.

Thank you also to all the people who helped make the conference a reality, and all the speakers who so generously shared their experiences and knowledge with us. It would be great to have a chance to hear more of the experiences of the knitters themselves, of their troubles and successes, and how they saw their level of participation!

My stay extended to Sunday, and so I had a chance to visit the exhibition about the stockings in the Textile Research Centre, where we had a short tour of the facilities, making me want to come back to study some more of the beautiful knitted and crochet items in the collection. In the afternoon we visited the weaver’s house and the Laakenhal museum, all places I am looking forward to visiting again! 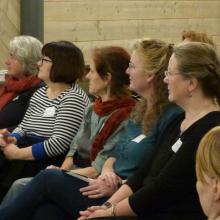 Fig 1. Captivated audience at the… 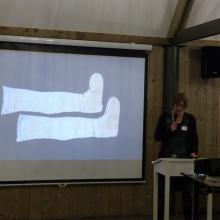 Fig 2. Reconstruction of the 17th… 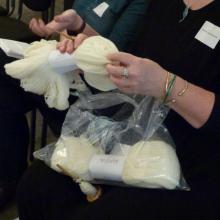 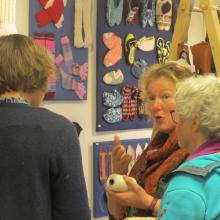 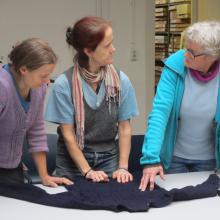 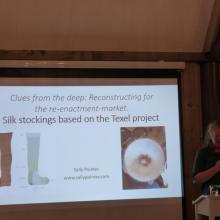