From 25 to 28 October 2022, we celebrated the 6th International Congress of Experimental Archaeology at Pézenas (France) with the support of the Experimental Association, EXARC, and several local and national French institutions that included INRAP. This Congress, which started in Santander (Cantabria) in 2005, and after that was organized in Ronda (Granada) 2008, Banyoles (Girona) 2011, Burgos 2014, Tarragona 2017 and, after a delay due to the pandemic, this year in Pezenas (France). This continuity of celebrations converts these conferences into a western reference for sharing methodological examples of EA among young and senior researchers from different institutions.

The conference had gathered several recognized researchers from the traceological and technological fields, who present examples of experimental methodologies mainly referring to organic and Lithic archaeological referential examples. As could be expected, and due to the deep lithic technological tradition of the French context, the conference was mostly oriented to ancient sites with a highly scientific perspective.

This conference was a great success, with the concurrence of at least 5 invited talks, 42 lectures and 28 posters, and a final exhibition of different interactive demonstrations including pottery, woodworking, fire production, experimental music, cheese production and bronze casting, among others, plus the inauguration of the Bois the Riquet archaeological site exposition.

During the first day, an initial round-table refection was held by experts such as Cristina Lemorini, Frederic Abbes, Sylvain Soriano and Javier Baena. They talked about such aspects as how EA started at their institutions and each presented some examples of their application of experimental methodologies.

Oral presentations focused on aspects such as taphonomical processes, their influence on the object's alterations and distributions, and fire effects on structures and objects. In the afternoon, the poster presentations offered a wide variety of contributions regarding the ancient knapping process, organic materials, traceological studies, and even melting productions, among others. The Congress finalized this day with an excellent conference about the experimental models in skin-working by one of the most recognized figures regarding  the Paleolithic in France, Sylvie Beyries.

On the second day, understanding simple knapping methods such as bipolar techniques or algorithmic sequences oriented the production sections, with many exciting contributions from European and American examples. The last session about functional application also provided fascinating examples of Wood, bone, and Lithic elements.
On the last day, two different parallel sessions were devoted to functional analysis, with several examples of functional analysis and interpretations of experimental methodologies and a parallel session with a discussion on the role of scientific dissemination and historical recreations by using Experimental Archaeology, the latter with numerous examples from the French context.

The conference had gathered several recognized researchers from the traceological and technological fields, who present examples of experimental methodologies mainly referring to organic and Lithic archaeological referential examples. As could be expected, and due to the deep lithic technological tradition of the French context, the conference was mostly oriented to ancient sites with a highly scientific perspective.

The existence of different traditions in the perception and application of EA is clearly reflected in the tradition of these experimental conferences. Countries like France, Spain, Portugal or Italy have generally focused the understanding of what EA brings to the research. This circumstance has been widely discussed in academic forums for a long time, and is moving towards a wider comprehension of the potential value of the interactive side of EA, as a result of the increase of a social and public citizens comprehension of the science. The conference of Pézenas, organized by one of the most relevant research groups, has demonstrated this new tendency.
Abstracts and contents can be viewed here.

During the conference, the Experimenta Association assembly decided on and announced the next International conference at Liege in 2025, organized by the Traceolab laboratory of the Liège University. We await your attendance! 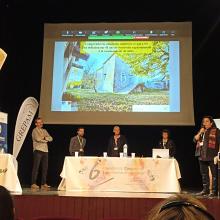 Fig 1. Laurence Bourguignon in the… 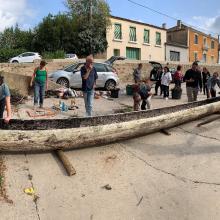 Fig 2. Preparation of the neolithic… 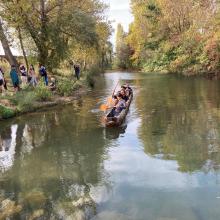 Fig 3. Rowing practice with the… 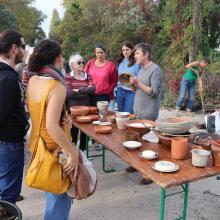