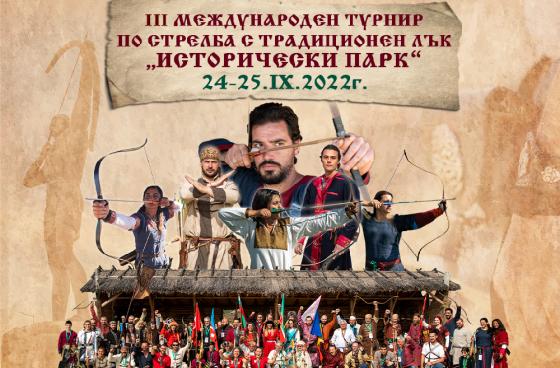 Shooters from Bulgaria and abroad will take part in this big and already traditional competition, who will compete in shooting with the ancient historical forms of the bow. Some of the most prominent archers and scholars of traditional shooting will be invited as official guests of the tournament, and an authoritative panel of judges, nominated by the Bulgarian Archery Federation, will be appointed for impartial reporting of the results and awarding of prizes.

The rules of the competition will include two competition days, in the first of which qualifications will be held, and in the second finals. Archers will compete in various disciplines, such as: medieval rotating target "SNAKEFIGHTER", shooting at a traditional Ottoman target, long-range shooting discipline, applied shooting at 3D targets, shooting from a boat, shooting at an angle from a fortress wall, and shooting at different distances from 10 to 60 m.

The shooters will compete in three groups - children, women and men. Registration for the tournament is done online by applying for participation from the button below "Apply for participation".

The prize fund of the tournament is provided by the host and organizer of the event - Historical Park, and will aim to reward with dignity the work and skills of the best shooters and revivalists of this ancient and beautiful art. The winners in the different groups will receive prizes for I, II, III place, and for men and women there are cash prizes, and for children subject prizes. A special prize will be awarded for the best shooter in the discipline - a rotating medieval target "SNAKE FIGHTER".

During the two competition days, the Historical Park expects thousands of guests, lovers of the history and culture of their ancestors, from Bulgaria and the whole civilized world, to enjoy the ancient art and skills of bow fighters.

For questions about the competition, disciplines and equipment
Emil Mitkov
+359898651210

For organizational issues, accommodation and others
Ralitsa Petrova
+359884618648