The summer of 2010 saw the 50th anniversary of the discovery of the Viking Era site at L’Anse aux Meadows in Newfoundland Canada. To celebrate this milestone Parks Canada arranged a number of special events, including an August visit from the Dark Ages Re-creation Company (DARC).

From 16 to 25 August 2010, this program was augmented by a team of 16 interpreters from DARC, who provided additional interpretive stations, experiments in bead and iron production, and a number of lectures in the visitors’ centre.

The Dark Ages Recreation Company traces its roots to the mid 1990s when a group of widely experienced re-enactors came together to explore the Viking Age in a more formal and interactive way. Frequent workshops allow members to learn and perfect craft skills. Ongoing experiments further our research in areas such as iron smelting and bead production. DARC presents the results of this work at museums, universities, and schools. Activity reports along with articles and experiment results are published at www.darkcompany.ca.

The reconstructed buildings at the UNESCO world heritage site are normally staffed with four to six living history interpreters providing displays matched to the activities that occurred at L’Anse aux Meadows around 1000 AD. From 16 to 25 August, this program was augmented by a team of 16 interpreters from DARC, who provided additional interpretive stations, experiments in bead and iron production, and a number of lectures in the visitors’ centre.

Parks Canada goes to significant effort to maintain the integrity of their site and interpretative program. While glass beads are important in the Viking Era, and a bead was one of the few artefacts recovered at this site, Norse beads were only produced back in Scandinavia. For this reason, the experiment in bead production was conducted outside of the reconstructed area in modern clothes. This provided a clear demarcation and an opening for discussion of the differences between culturally appropriate activities and those which can be proven, or reasonably assumed, to have happened at this specific site. In contrast, because iron smelting was documented in the archaeological record, the iron experiment was done inside the reconstructed area in historic clothing, although with modern safety equipment.
The current sequence of bead experiments aims to adjust the furnace shape to provide an effective environment for working and annealing the glass while maintaining a correspondence to the archaeological remains. The furnace was modeled on hearth ÆZ from Ribe, Denmark. Visitors and staff were provided an opportunity to both work the bellows and make beads. Although an excellent hands-on experience, the only conclusion from this specific experiment was that the wind strength has a strong impact on successful production. On the first day, with strong winds, all of the beads broke during cooling. On the second day, with no wind, the success rate was nearly 90%.

The iron smelting experiment was the last in a series designed to replicate the process of iron bloom production indicated by the archaeological remains.
The experiment was performed inside of a reconstruction of the original furnace hut in which key equipment such as the anvil-stump and smelter were placed to match the applicable archaeological features. The smelter was created with a diameter and wall thickness, and using a mixture of sand and clay, to match the archaeological record. Harvesting of natural materials from the environmentally protected site is forbidden; consequently an ore analog chemically matched to local samples of bog-iron was used. DARC and staff workers took turns on the bellows and feeding the smelter the 35.5 kg of charcoal and 20 kg of ore required. A 2.8 kg bloom was produced, which closely matches the estimated 3 kg bloom the Norse created. A careful comparison of the location and distribution of the remains of the experiment with those from the archaeology should provide additional insight into the original process.

The enhanced program also included a site walk to locate bog iron sources, a demonstration of pewter casting, and five lectures. The lectures included ‘Iron Smelting in Vinland, converting archaeological evidence to a practical method’, ‘Viking Era Pastimes’, ‘Norse Music and Instruments’, ‘Bead production, from archaeology to beads’, and ‘Vikings Unearthed: a discussion of the Oseberg find and the context it provides for Viking Era culture’.

Interpreters from DARC were deployed in a number of interpretative stations within the reconstructed encampment. The textile station in the main hall was expanded by five interpreters with displays of combing and spinning fleece, weaving on the warp-weighted loom, sprang, tablet weaving, naalbinding, netting, and finger braiding. A spring pole lathe was set up in the compound with two interpreters producing wooden ware. This station was augmented with two logs that were split and worked to provide raw materials. When the weather provided an opportunity, this group also helped with ongoing construction of a small boat (faering).

The on-site blacksmith’s station was augmented with two interpreters and extended to include charcoal production and the iron smelt experiment. A low status family station provided a location for three interpreters to demonstrate basket making, music, and child rearing. Two interpreters staffed a domestic station that both provided lunch for the interpreters, and reviewed with visitors the foods available in the western lands in the Viking Era. Activities at this station also included such homely tasks as laundry and dish washing; while introducing the differences between free and slave status. One interpreter focused his attention on the art of carving including horn, wood, whale, seal, and cow bones. This allowed for a discussion of the types of materials and art styles through the period. A final station introduced visitors to the concept of status displays and breadth of trade available to Viking Era culture.

For the members of DARC, this anniversary provided an opportunity to place their research in context and add environmental factors into their experiments.  It also provided a valuable opportunity to share skills and ideas between DARC and the Parks Canada interpreters. Beyond the excitement of seeing iron on the site for the first time in 1000 years, the enhanced experience provided many additional learning and participation opportunities for visitors. 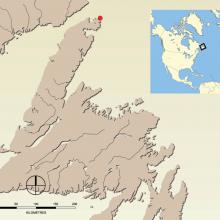 Fig 1. The map of Newfoundland Canada,… 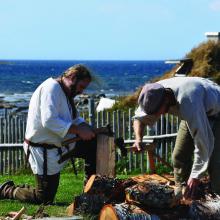 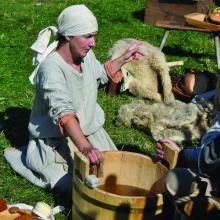 Fig 3. Daily chores of dishes and… 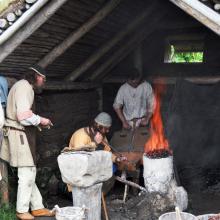 Fig 4. A re-creation of the first iron… 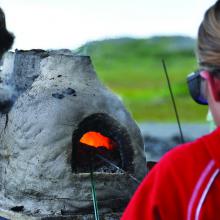 Fig 5. Experimental bead furnace in use… 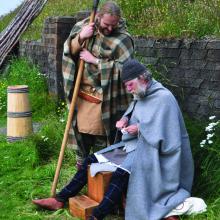 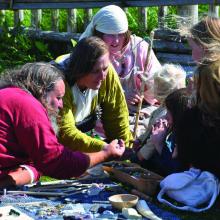 Fig 7. Trade goods from across the…

Replication of a Maori Ethnographic Textile Hem Border Pattern
Varus and the Lost Legions in Sagnlandet Lejre - A Re-enactment Success?
Book Review: A Handbook for Women’s clothing, Northern Europe, 1360-1415 by Ahlqvist and Neijman
The Variation of Elastic Modulus and Changes of Structures and Mineral Phases in Rocks as Parameters for the Identification of Fire-Setting in Ancient Mines
Current Trends in Annual Historical Re-Enactments Events in Catalonia. Uses of Cultural Heritage