The qualification of actors plays a serious role for the museums, both in regard to the scientific background of the presentation, but also in regard to visitor friendliness, paired with the motivation and the ability to entertain the visitors well.

Germany has a delayed development in historical interpretation using living history in museums because of historical biases against such presentation. Concepts of living in the past are presented in business-like, often sterile, open-air museums, which are focused on keeping a scientific distance. There is little development of visitor relations with those taking part in living history. Thus, there is little interpretation of history where the actors involved in the presentation remain strictly in first person (“I got up early to do my washing...”). Usually the actors revert to third person (“People had to work hard...”) interpretation in order to give background explanations.

The Bachritterburg in Kanzach (Ldkr. Biberach, Baden-Württemberg, Germany) was able to participate in the EU Grundtvig Learning Partnership Didarchtik. This project has partners from Catalonia, the Netherlands, Italy, Sweden and England, as well as another one from Germany. The international meetings, impulses, sharing of ideas and the comparisons between the different partners have enriched the daily work of our museum in a lasting way.

From 7-9 of April 2011, the Bachritterburg, a reconstructed 13th century wooden motte-and-bailey (Turmhügelburg) was host to a Didarchtik meeting. The theme was Living history – from the view of the visitor, the actors and the museum team. Goals were set regarding the content of the meeting, but – and in each conference this is almost the most important – there were also exciting intercultural discussions during the breaks.

If we take the research of Albert Mehrabian (2009) about communication into account, someone who listens will pick up about 7% of the contents of a discussion and the meaning of words, 38% opens up through the voice and the way of speaking and 55% is about the body language, including gestures and mimics. These were perfect conditions for our meeting where neither the hosts nor 95% of the participants were native English speakers, yet the conference was, like at all Didarchtik meetings, in English.

A nice example of international misunderstanding arose from different uses of the words ‘education’ (Bildung in German) and ‘learning’ (Lernen in German). In both Dutch and English education seems to be regarded as something that is passive, while learning is seen as active. Therefore, one should focus on ‘learning’ when the official wording in EU terminology is ‘Adult Education’.

In German, these words ‘Bildung’ and ‘Lernen’ have, however, another context. “Education is what remains when we have forgotten all that we have been taught” was the conclusion of George Savile, Lord Halifax, a 17th century English politician. In German the word ‘Lernen’ is associated with “repeating without having own thoughts” while the German word “Bildung”, which indicates the process of having rich experiences and one’s own opinions, is a precious ideal. We thank Sara Fruchtmann for solving these temporary misunderstandings and offering live, simultaneous translation during the conference, made possible by her bilingual background as half Canadian. Besides that, she also gave a very good presentation (mentioned in the main text).

Rudolf Obert, director of the Bachritterburg, explained how they decided on the marketing concept of ‘living history’. Urged by the dense museum landscape in Oberschwaben, and by the shortcoming that original artefacts are not presented at the Bachritterburg, the then-director Dr Sven-Hinrich Siemers developed a concept of bringing the castle alive that relied on American examples. This concept had the advantage of connecting the living history groups that Siemers already knew.

Now, the Bachritterburg cooperates with about 20 living history groups in order to offer an attractive program of activities throughout the year as well as other offers. During the season (April to the end of October) living history groups are present for two weekends out of each month. These groups do not just present costumes and medieval crafts; they also illustrate the courtly and agrarian everyday life, as well as fighting with weapons.

In 2011, the Bachritterburg celebrated its tenth birthday. In 2001, the inauguration of the wooden tower took place, in 2004 the inauguration of the complete surroundings with bailey followed. The latter exists of a reconstructed farm, a stable and storage, a well and a garden. When the area was enlarged, the museum education area could then be expanded. Every year approximately 25,000 people interested in history visit the motte-and-bailey.

In order to test the educational value that living history events have for adult visitors, I developed a survey in two stages, which was used in 2011. The visitors filled out the first portion on the day of the visit. For the second part, an employee of the Bachritterburg called the visitor a few weeks after their visit. The answers clarify why the visitors remember and learn something after they have observed a living history group or after they have taken part in the activities. Nobody at the Bachritterburg doubts that visitors learn something, but what exactly they learn, and with what intentions and motivations, is interesting in respect to lifelong learning. After half a season, the first results of the survey are very positive.

The living history groups have developed great interest in the results of this survey, since they are engaged to offer a better match for the visitor’s needs and interests. The groups were selected personally by Dr Siemers in order to fulfil the needed scientific and didactic quality. They do their best to offer a fitting image, an inviting relationship and a pleasant interaction with the visitors. Following the living history meeting in Kanzach, they had a big interest in new international developments.

In Kanzach, scenic theatre or story telling is not practiced. We also have to constantly and critically address the images the visitors have in mind; which vegetable went in the pot? Is it really seasonal? In spring, with so much to do, can the farmhand actually lie in the sun and be lazy? How should the actors be active when the museum has no fields to tend to?

With this I touch upon a subject that was discussed intensely at the meeting in Kanzach, although because of its complexity, not to a conclusion: what quality criteria should living history groups live up to? The qualification of actors plays a serious role for the museums, both in regard to the scientific background of the presentation (including detailed costumes and all small bits and pieces) but also in regard to visitor friendliness, paired with the motivation and the ability to entertain the visitors well. Continuous research and a quality-control body could prevent groups coming to a standstill or from making mistakes in the presentations. It would be a plus if actors could also be at least fluent in other languages. A pertinent no-go are politically extreme statements like the ones which Karl Banghard presented in his paper about the Germanic group Ulfhednar.

For the living history groups, it is important that the museum team they work with is well educated and that communication between the two groups functions well and without friction. The more authentic the surroundings are, including replicas of artefacts, the more coherently the bringing to life of the museum works. The actors like clear instruction behind the scenery.

In her paper on living history in the Bremer Geschichtenhaus, Sara Fruchtman presented a less often mentioned aspect: you don’t just need a historian dressed up in costume to present good living history. Mrs Fruchtmann is a director, theatre teacher and actress. She managed to develop long-term unemployed people which were assigned to her, partly with social and mental issues, into history interpreters. This way, she helped them along a path, carefully and with respect, which led to astonishing success. She uses a method she developed herself where the body and mind are allowed to interact. One example she gave dealt with breathing techniques. The quality of breathing can cause the body to relax or tighten; the voice changes and so does the mood. The body feedback enables the person to slip into different characters.

At the meeting in the Bachritterburg Kanzach, all participants practised lifelong learning by means of international exchange. The participants who themselves were actors who interpret history suggested organising a further meeting under the name Living History: market of ideas. 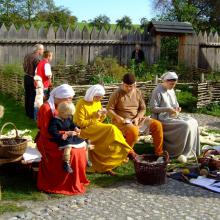 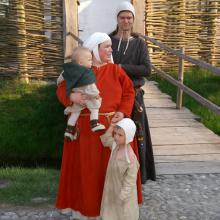