The VII OpenArch Conference took place from 11 to 15 June 2014 at Kierikki Stone Age Centre, 50 kilometres northeast of Oulu in Northern Finland. The conference was jointly organised by Kierikki and the University of Exeter, which are in charge of Working Package 5, “Dialogue with Science”. The sessions were focused on “The Dialogue of Archaeological Open-Air Museums with Science” and its links to ancient structures, skills, technologies and study techniques.

The conference was a great success thanks to good lectures, presentations, experiments, good Finnish sauna and a nice atmosphere where young students could show off their skills.

There were altogether 50 participants from 13 different countries. We heard 20 lectures and presentations in the auditorium and viewed several experimental actions in the Stone Age village.

The first day was dedicated to ancient monuments and research related specifically to Northern Finland. The lectures focused on house constructions, ceramics, iron smelting, amber findings and  living in prehistoric houses. Dr Tiina Äikäs from Oulu University started the lectures by presenting her research on Sámi offering places and interesting new research about soundscapes of these 11th-17th century AD dated stones and Neolithic rock paintings. Dr Elisabeth Holmquist-Saukkonen from Helsinki University presented the Nordic-Estonian research project on the Neolithic Corded Ware Culture Complex (CWC, also known as Battle Axe culture), which spread across the Baltic Sea region around 2900/2800 - 2300/2000 BC. The research found diversity of CWC potting traditions at different manufacturing areas and revealed intensive cross-regional contacts and pottery exchange across the Baltic Sea. Phil.lic. Eero Muurimäki, who has worked since the 1980s at Saarijärvi Stone Age village in Central Finland, presented two lectures: an overview of Neolithic house pits and remains in Finland and a second lecture on experiences of prehistoric building constructions in Finland. Among other lectures were Patrik Franzen’s on about amber findings and international contacts in the Finnish Neolithic. Archaeologist Inga Nieminen complemented Muurimäki’s presentation by presenting on experiences with thatched roofs in house reconstructions, especially in Kierikki. Dr Linda Hurcombe talked about tool types, fire and woodworking that were also tested in practice by Exeter researchers at Kierikki Stone Age village.

The second day and the morning of the third day featured presentations and experiments in the Stone Age village. Joni-Pekka Karjalainen gave a lecture on Finnish Iron Age stone slab box furnaces. He and Juuso Vattulainen gave a presentation on iron smelting in a slab box furnace. Werner Pfeiffer from Albertsdorf gave a presentation and a demonstration on some glue types made using Finnish birch bark. Dr Wolfgang Lobisser from the Vienna Institute of Archaeological Science (representing Parco Montale) gave a lecture and presentation on wood making and building up a fortification of the Terramare culture using middle Bronze Age tools. Theresa Kamper from Exeter showed examples of different tanned leathers and also made shoes from it. The log boat builders Brian Cumby and Tom Monard Hansen from Exeter finished work on their boat while testing work with stone tools and fire.

On the last day there were visits to the Oulu Museum and Science Centre Luuppi, including the exhibition, “Age of the Dinosaur”, produced by the Natural History Museum, London.

Information on OpenArch can be found at www.openarch.eu. Presentations from this conference are available at www.slideshare.net/EXARC.

The conference was a great success thanks to good lectures,  presentations, experiments, good Finnish sauna and a nice atmosphere where young students could show off their skills.

The University of Exeter is preparing proceedings from the conference lectures.

Main Image: 3D prints and casts of a neolithic carved 'grenade' stone from Skara Brae Orkney. These formed part of the Touching the Past exhibition. Kierikki Conference. Photo by Joni Rajaniemi 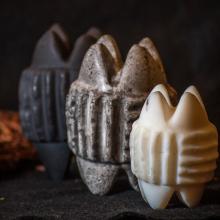 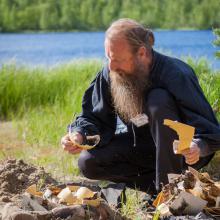 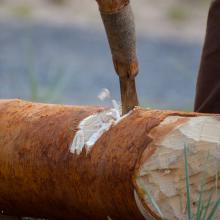 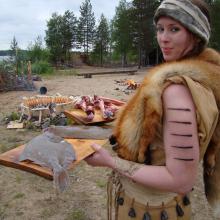 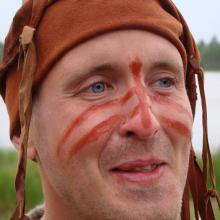 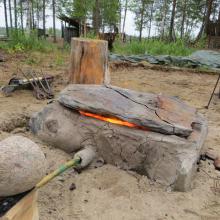 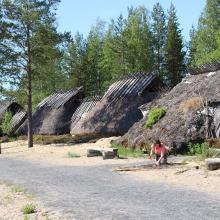 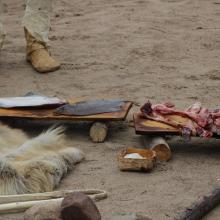 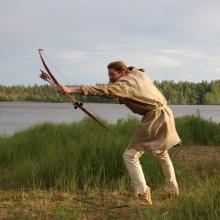