An overview of finds, their regional spread and significance though the ages.
The spiral tubes are made of an alloy that consists of copper supplemented mainly with zinc and/or tin (Rammo, Ratas 2015, table 1). The outer diameter of the spiral tubes usually range from 2.5 to 5 mm. Woollen and linen threads as well as horse hairs, were used to join spiral tubes into decorations.

The decorations were worn mainly by women and mainly on the clothing items and accessories worn on the top of the whole costume and visible to others as can be seen on the basis of their position in graves: for example, aprons, head dresses, shawls, leg wrappings.

Spiral tube decorations—where and when?

People have used tiny metal elements to decorate their clothing since metals were first brought into use. Numerous methods have been used, but one possibility of creating such tiny objects is to wind wire around a stick, to get a long spiral tube and cut it into smaller pieces (Blumbergs 1982). These small pieces—spiral tubes— were used in ornaments and on clothing. Tubes such as these have been found occasionally in various places in Central Europe (Blumbergs 1982, 23). The example discussed within this paper is of the decorative spiral tubes which have been found in various sites along the eastern shore of the Baltic Sea in present-day Estonia, Finland, Latvia, Lithuania and north-western Russia (See Figure 1). Earliest among them, for example, are fromfourth andfifth century AD sites in Lithuania and from sixth century sites in Latvia (Volkaitė-Kulikauskienė 1997, 131; Zariņa 1999, fig 27). Occasionally the spiral tubes were still in use within the region during the medieval and modern periods (e.g. Kaljus 2009).

In Estonia, the earliest fragments of spiral tube patterns have been found in archaeological excavations in Raatvere cemetery and are dated to the 11th century AD (See Figure 2). These decorations have been preserved thanks to the habit of burying the dead without cremation and in festive attire. In earlier times cremation was common in the areas of present day Estonia. Spiral tube decorations have predominantly been found in graves, where they were part of the funeral clothing of the deceased. Mostly they were used on clothing items worn by women. In 16th–17th century hoards, however, the remains of festive head dresses adorned with spiral tubes have been discovered, for instance in Erreste (See Figure 3) (Kiudsoo, Ratas 2005). The most recent fragments of spiral tube decorations were collected by ethnographers at the end of the 19th century and beginning of the 20th in South-Estonia (e.g. in Viljandi County; Kaljus 2009). The ethnographical items used to adorn the hem of a wraparound skirt and was worn in wedding ceremony, designate the end of the long tradition of spiral tubes (See Figure 4).

The spiral tubes are made of an alloy that consists of copper supplemented mainly with zinc and/or tin (Rammo, Ratas 2015, table 1). The outer diameter of the spiral tubes usually range from 2.5 to 5 mm. Woollen and linen threads as well as horse hairs, were used to join spiral tubes into decorations. One method to make such decorations was to weave spiral tubes into tablet-woven bands (See Figure 5). The band was attached to the edge of the garment by sewing, or with little ringlets. Another technique is to finish the starting and ending borders of a fabric with spiral tubes by threading them onto the warp ends. In this case the spiral tubes were threaded onto the fabric’s warp yarns at both edges of a cloth. Thereafter was the row of tubes fixed with tablet-woven band using the fabric’s warp yarns as a weft for the band (See Figure 6).

The decorations can also be made by braiding. The basis of the braided pattern is usually the ‘lattice’ that is made by crossing the yarn or horse hair bundles. The placement of spiral tubes in this ‘lattice’ form the pattern. In these patterns a combination of horse hair and woollen yarn was often used. (See Figures 7, 8, 9).

Who made spiral tube decorations? At the end of the 12th century the decorations were partly made by more or less specialised artisans on the eastern shore of the Baltic Sea. A craft box of birch bark has been found in Lõhavere hill fort and dated to the beginning of the 13th century (Laul, Tamla 2014). This box contained tools and craft products (tablets, the handle from a sword beater, and bundles of bands). In addition, fine blue yarn, horse hair, tiny spiral tubes for braiding, and readymade decorations (See Figure 7) were discovered in the box. Similar patterns are spread all over the area where such adornments were found, indicating that some professional crafts persons made these patterns for trade and exchange (Riikonen 2003, 13).

Certainly women also made the spiral decorations for themselves at home. The spiral tubes that fell from the patterns could have been reused. For instance, the decoration of aprons from 12th century northern Estonia are quite similar at first glance, although in detail they vary quite a lot. Obviously every woman adorned the apron hem herself (See Figure 10, 11 and 12).

Why were these decorations used?

Certainly, these tiny decorations are very beautiful when incorporated into garments. Due to colour variations within the copper alloys, the spiral tubes have a rich golden shine. Thishas given rise to the assumptions that to wear these decorations expressed a desire to emulate the kinds of gold ornaments (e.g. brocaded bands) worn by elite groups seen abroad (Lehtosalo-Hilander 1980, 243, 256).

The decorations were worn mainly by women and mainly on the clothing items and accessories worn on the top of the whole costume and visible to others as can be seen on the basis of their position in graves: for example, aprons, head dresses, shawls, leg wrappings. The dominant color in local female festive attire of 12th–13th centuries was a dark blue (Rammo 2015), which contrasts dramatically and with stunning effect any yellow-golden shaded ornaments (See Figure 12). However, the spiral tube decorations were not used merely because of their beauty. They were also apotropaic statements, because the metal as a strong, durable and shiny material, was considered to protect the wearer from malign influences (e.g. Welters 1999, 8). It seems that the metal decorations belonged foremost to the attire of married women. In the fertile age and, for example, while pregnant, the protection was most needed. Last but not least the spiral tube decorations communicate social meanings, while stressing status and dignity. Apart from status based on the age or marital status, it could stress also the economic position. Although the usage of spiral tubes was rather common in the society, there have been unearthed graves with remarkably abundant decorations (See Figure 12). 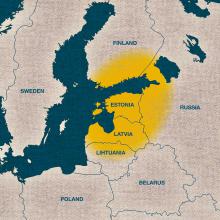 Fig 1. The spiral tubes used in… 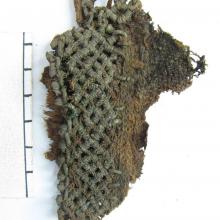 Fig 2. One of the earliest finds in… 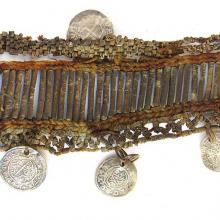 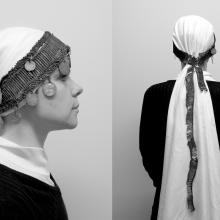 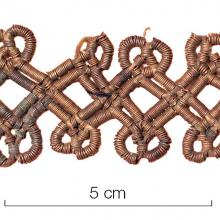 Fig 4. The youngest item of this kind… 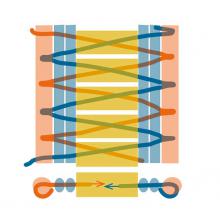 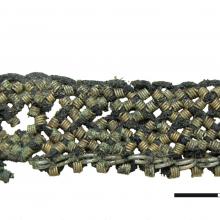 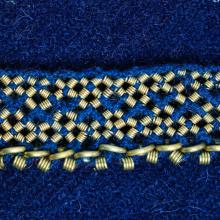 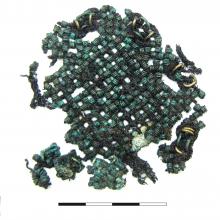 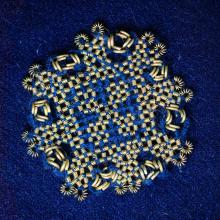 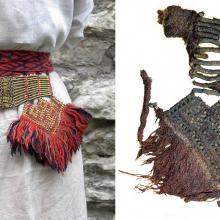 Fig 8. Back apron from Virunuka… 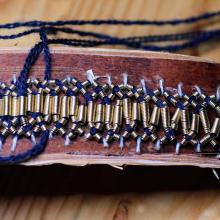 Fig 9. The patterns could have been… 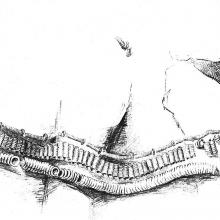 Fig 10. Ornamentation of the lower edge… 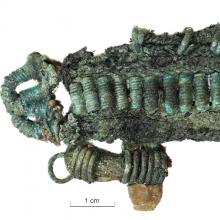 Fig 11. Remains of an apron corner from… 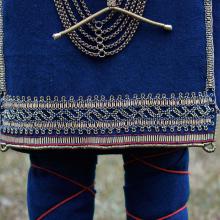 Fig 12. Reconstruction of a festive…