The first Bronze Casting Festival was held in May 2017 at the Bronzezeithof in Uelsen, Germany. The event was organised by Martijn van Es, who has an active interest in bronze casting and experimental archaeology. A call was put forward to skilled metal workers to come to Uelsen to conduct experiments and to exchange information about their experiences working with bronze. In addition to metalworking, formal talks were also planned.

The experimental work was not limited to the Bronze Age period, as the focus of the festival was on the metal itself. Diverse experiments were tried out, such as using different moulding materials, various furnace designs, and exploring materials used to make cores for socketed tools.

The Bronzezeithof is an open-air museum recreating the environment of a Bronze Age farm in a rural setting near the Dutch border (See Figure 1). The museum has been in operation for 14 years, exhibiting a reproduction of a Bronze Age long house, workshops and areas set up for various activities, including an upright drill for drilling stone tools, bread ovens, a meat smoker, a recreated burial mound, and garden plots used for growing plants for both cooking and fibres. In addition to metalworking, volunteers at the Bronzezeithof demonstrate textile arts, fire making, stone working, grain processing, and food preparation (See Figure 2).

Using the loam provided insights into how local resources could have been exploited in prehistory. Despite the fact that the local loam has less plastic properties than commercial clay, it had been used for most of the structures at the farm and for building the furnaces in the past. It was often challenging to work with, especially when compared to modern processed clay.

Rather than casting for the sake of making metal objects, the focus of the event was to exchange information and to provide an environment for experimental archaeometallurgy. Participants were encouraged to organise experiments that they would be able to perform during the festival.

The experimental work was not limited to the Bronze Age period, as the focus of the festival was on the metal itself. Diverse experiments were tried out, such as using different moulding materials, various furnace designs, and exploring materials used to make cores for socketed tools.

The widest range of experiments was exhibited in the different furnaces that were constructed. Designs ranged from a shallow, stone-lined pit, to a self-draughting furnace based on a work written by Bastian Asmus (Asmus 2009). Other furnaces experimented with air flow, including one with a short chimney. The simplest furnace was constructed by Chris Stein and Kevin Frank who lined a shallow pit with slabs of local sandstone. Giovanna Fregni also constructed a pit furnace, but with two chambers separated by a “teapot stand”, also known as a perforated clay slab. The design of her furnace was the subject of her talk. Thomas Leimbach, whose work focusses on Roman and Medieval metalwork, used a short shaft furnace that also incorporated a perforated clay slab that was built into the structure of the furnace (See Figures 3 and 4). Jeroen van Dordrecht and Jennifer de Jong (preHistorisch Dorp Eindhoven) used an Early Bronze Age horseshoe-shaped furnace that was heated from the side. This was later converted to a circular furnace. Mark Vyvyan-Penneycontinued to experiment with a modified shaft furnace with a chimney similar to one he had previously built (See Figure 5). The most remarkable was Martijn van Es' self-draughting furnace, which did not require bellows, yet produced more than sufficient heat to melt crucibles full of bronze. Although there were some problems with Mark Vyvyan-Penney's furnace chimney, all the furnaces performed admirably, and some exceeded expectations. Thomas Leimbach' furnace reached temperatures high enough that one of his crucibles melted, and Martijn van Es' furnace quickly reached temperatures exceeding 1150°C degrees using only firewood.

Thomas Leimbach also experimented with small self-tapping crucibles that replicate Roman Era crucibles used for jewellery making. The crucibles are cylindrical in shape with a small hole on the side. The metal pours through the hole into the mould, leaving any dross or charcoal floating above.  In addition to the experimental furnace with the chimney, Mark Vyvyan-Penney also experimented with wooden cores for casting socketed sickles (See Figure 6). Moreover, Giovanna Fregni experimented with a medieval recipe for making moulds using egg white and burnt sand.

Three talks were scheduled as part of the programme. The first presentation was by Heide W. Nørgaard (Aarhus University) who spoke about examining objects to identify traces of the metalworking processes. Of interest were sections where complex objects had been joined, and recognising techniques for decorating waxes prior to casting in bronze (Nørgaard 2015). Artūrs Tomsons (Latvijas Nacionālais vēstures muzejs) spoke about experimental work undertaken by the National Museum in Latvia to replicate bronze objects from the museum's collections. Giovanna Fregni (independent researcher) spoke about solving problems with airflow in furnaces and archaeological evidence from the Late Bronze Age that could present a solution to the problem (Fregni 2014)

The Bronzezeithof is open on Sundays and has tours on other days by appointment. Visitors can see volunteers working at various crafts and guides provide information about the farm and how it relates to local archaeology. Visitors are invited to participate in many of the activities, providing an interactive experience. The Bronze Casting Festival was included as part of these events and provided a unique opportunity for the visitors to see the different ways in which bronze was cast in the past. Participants explained early metalworking processes and demonstrated bronze casting, in addition to displaying tools and finished work.

ASMUS, B. 2009 “A natural draught furnace for bronze casting”. In Metallurgy and Civilisation: Eurasia and Beyond. J. Mei and T. Rheren, eds. Archetype, London.

FREGNI, E.G., 2014 “Of Tea Pot Stands and Perforated Slabs: A report on the comparison of experimental bronze casting furnaces with artefacts from SE England” A report written for the Umha Aois website. Available at http://www.umha-aois.com/ua-site/Of_Tea_Pot_Stands_and_Perforated_Slabs.html (Last accessed 27 June 2017). 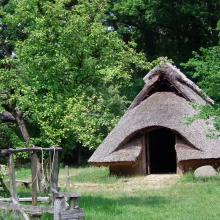 Fig 2.The Bronze Age long house and the…

Fig 5. Furnace with a chimney built by… 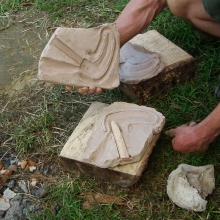 Fig 6. Clay mould for a sickle with…