The annual European Textile Forum took place from 7-13 November 2016. This year the focus was ‘mistakes’, the unintended consequences in textile manufacture or preservation that reveal more about the artefact, the techniques used and its makers than a ‘perfect’ piece could do. The programme was rich in practical experiments, making use of the conference and laboratory facilities. There were lectures, workshops, roundtable discussions and a day’s visit to the Römisch-Germanisches Zentralmuseum (RGZM) in Mainz. The forum is a place where academics, professionals, re-enactors, skilled amateurs and novices can meet to present new ideas and findings, compare notes, advise, reflect and learn new skills. The European Textile Forum is a proving ground for new theories in a friendly environment, organised by Katrin Kania and Sabine Ringenberg. Delegates could stay the length of the conference, a couple of days or use day passes to visit as they wished.

One of the strengths of the European Textile Forum is that as it takes place over a week, it allows experiments and processes to happen that a shorter conference cannot.

One of the strengths of the European Textile Forum is that as it takes place over a week, it allows experiments and processes to happen that a shorter conference cannot. This means that delegates not only learn about processes and outcomes through theoretical lecture and discussion, but can actually see and participate in practice, and so are able develop a deeper understanding and appreciation of what is involved, such as the smell produced and space required when fermenting woad. It also allows any unforeseen issues to arise which must have been addressed in antiquity.

This year delegates participated in a spinning, weaving and dyeing experiment run by Katrin Kania, Harma Piening, Beatrix Nutz, Mickey Schoelzke and Sabine Ringenberg, which sought the effect of twist angle of yarn on dye penetration in woven fabric. There is an assumption that dye penetration indicates whether fabric was dyed in the fleece, yarn, fabric or garment stage of manufacture, but the effect of the twist on the yarn was unknown. During the week woad was fermented through different methods by Micky Schoelzke to investigate what affects the outcome. Factors influencing the mordanting of linen were also investigated by Micky Schoelzke. Prior experiments to explore the influence of metal kettles on dyeing, inspired by Heather Hopkins’ investigations of the dyeing industry of Pompeii, were re-run and expanded in a single series by Katrin Kania, Sabine Ringenberg and Heather Hopkins, allowing continuity of equipment, materials and approach that staggering had denied, to confirm if the metal affected the mordanting, dyeing or both.

A series of lectures, workshops and roundtable discussions ran parallel to the experiments. Each experiment was introduced within a wider archaeological and cultural context. The nature of a ‘mistake’ was discussed and explored: a mistake may be an unintended consequence to the person that makes it, but it can be informative, showing the production process that a perfect artefact would conceal. A modern observer defining ‘unintended’ can itself lead to mistakes. Beatrix Nutz discussed repatched fabrics of 15-18th centuries from Carinthia and Tyrol, in which former garments had been reused in newer ones, preserving an archaeological record that would have been lost and culturally contrasting today’s throwaway society. Aislinn Collins discussed the issues of misreporting leading to incorrect understanding and reconstruction, particularly when an artefact is so fragile that few people are able to check their version against the original. She used the analogy of scattered feathers, how a rumour once spread cannot be reclaimed, which itself has an undefined beginning. Heather Hopkins discussed why making mistakes is vital to finding an accurate answer and how a multi-angled approach exposes erroneous findings. Her case study was an overview of how the understanding of Pompeii’s dyeing industry has evolved and how as archaeology develops ‘best practice’ changes. Angelika Rudelics explored the difficulties faced in interpreting and preserving textile samples from archaeological sites, discovered by archaeologists with limited specific knowledge and how this contrasts with the public only seeing successfully conserved, pristine, well-presented fabrics.

Delegates spent a day at Mainz, viewing a collection of ‘mistakes’ from the vaults of the RGZM, arranged by Petra Linscheid. These were up to 3000 years old, from Europe, the Middle East and Africa, and were so fragile that delegates had to don masks and protective suits to view them. Each example told of the practical and the human act of manufacture. They included pieces where the weaver had run out of a dyed thread and continued with the same colour, but over time the colour had faded showing that a different dyestuff had been used, that either the weaver, customer or viewer had not been aware of. The museum holds tunics with marked but uncut neck holes, deposited quickly in a tomb before they were complete. Each appeared to say, “It’s ok, no one’s going to see it…” making its preservation and the ability to view it now more special. Delegates also explored the RGZM and enjoyed a leisured lunch in Mainz.

As usual the European textile Forum was hosted by LEA (Labor für Experimentelle Archäologie) in Mayen, invited to return to its adopted home by Director Michael Herdick. LEA is a satellite of RZGM in Mainz. Mayen is in the Vulkan Eifel in southern Germany. It has good road and rail transport links, and is easy to get to from Cologne and Frankfurt airports. LEA is located in a vulkan parc, a former basalt mine that is now a sculpture park, containing a bat cave in a former brewery. Catering for the conference is included in the accommodation price.

European Textile Forum 2016 shows that mistakes matter and that without these our understanding of the archaeological record and even what it means to be human would be poorer. Papers will be published in due course. Prior conference proceedings were published by Oxbow in 2013 as ‘Ancient textiles, Modern Science’.

The next European Textile Forum is due to take place at LEA on 6-12th November 2017. The theme is ‘Silk: subtle and sumptuous’. Other textiles, manufacturing, dyeing related experiments, workshops and lectures will be considered. Call for Papers and the booking forms are now open.
http://www.textileforum.org/en/upcoming-conference 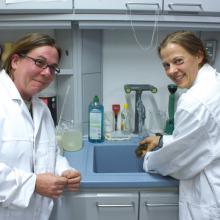 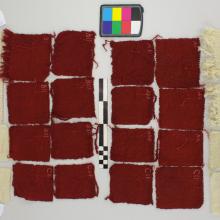 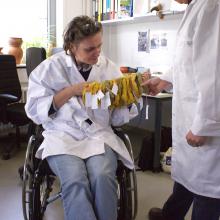 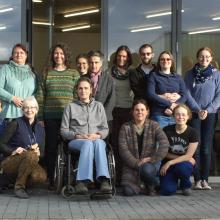 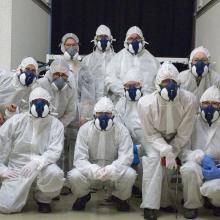