Fire Beneath the Dome: Project to Evaluate the Efficiency of Clay Ovens in the Viking Museum Haithabu

Visitors to the museum should get an impression of Viking life in Haithabu as vivid as possible – that is why from time to time we heat the clay ovens for baking or cooking (See Figure 1). We noticed that quite high temperatures are reached, but these will decrease again quickly if there is no more fire inside the oven, although it tangibly keeps the warmth for a very long time. The question we wanted to answer was: how does the temperature change proceed in concrete terms, and what conclusions can be drawn for the plausible use of ovens in the Viking era? During this experiment data concerning the efficiency of the ovens for the time frame of a daily cycle (24 hours) was evaluated.

The experiment was carried out in summer on a quite warm day compared to the normal weather situation. The heat development inside and outside the oven is thought to be uninfluenced even by wintry outside temperatures.

The oven used for this experiment is situated in the lodging house (house 7) of the Viking buildings within the Haithabu semicircle wall. The oven´s shape and setup were reconstructed based on archaeological finds. Over an oval base plate, which was lined with field stones and grouted with clay, a domed willow wickerwork vault bearing a clay coating of varying thickness stands. At the front there is an opening for firing and loading. The oven does not have a chimney. The clay was tempered with sand, straw and cow dung (See Figure 2a, b, c).

The experiment setup was designed to cover two fields: Temperature change near and inside the oven; Changes of room air temperature inside the house (See Figures 3 and 4).

An open fire is a natural process, which can be affected by multiple factors, for this reason variations in temperature rise during the heating phases are inevitable. These were not verified in this experiment. A rule for the size of the fire was that no flames must emerge from the oven door. Only lime wood was used for firing.

An oven can be used in different ways. During this experiment the embers were totally cleared out, and the bottom plate was cleaned by sweeping and wiping with a wet piece of fabric attached to a wooden stick, thus taking up remaining ashes and tossing remnants of the embers to the oven´s inner edge.

During the 24 hour period of the experiment the oven was used (See Table 1, grey/blue fields) and fired at irregular periods, at night there was no fire. The heating started at 08:00 am, from 10:00 pm until 06:00 am there was not heating and at 06:00 am until 08:00 am the oven was heated up again. While being used the interior space of the oven was mainly closed with a hatch. 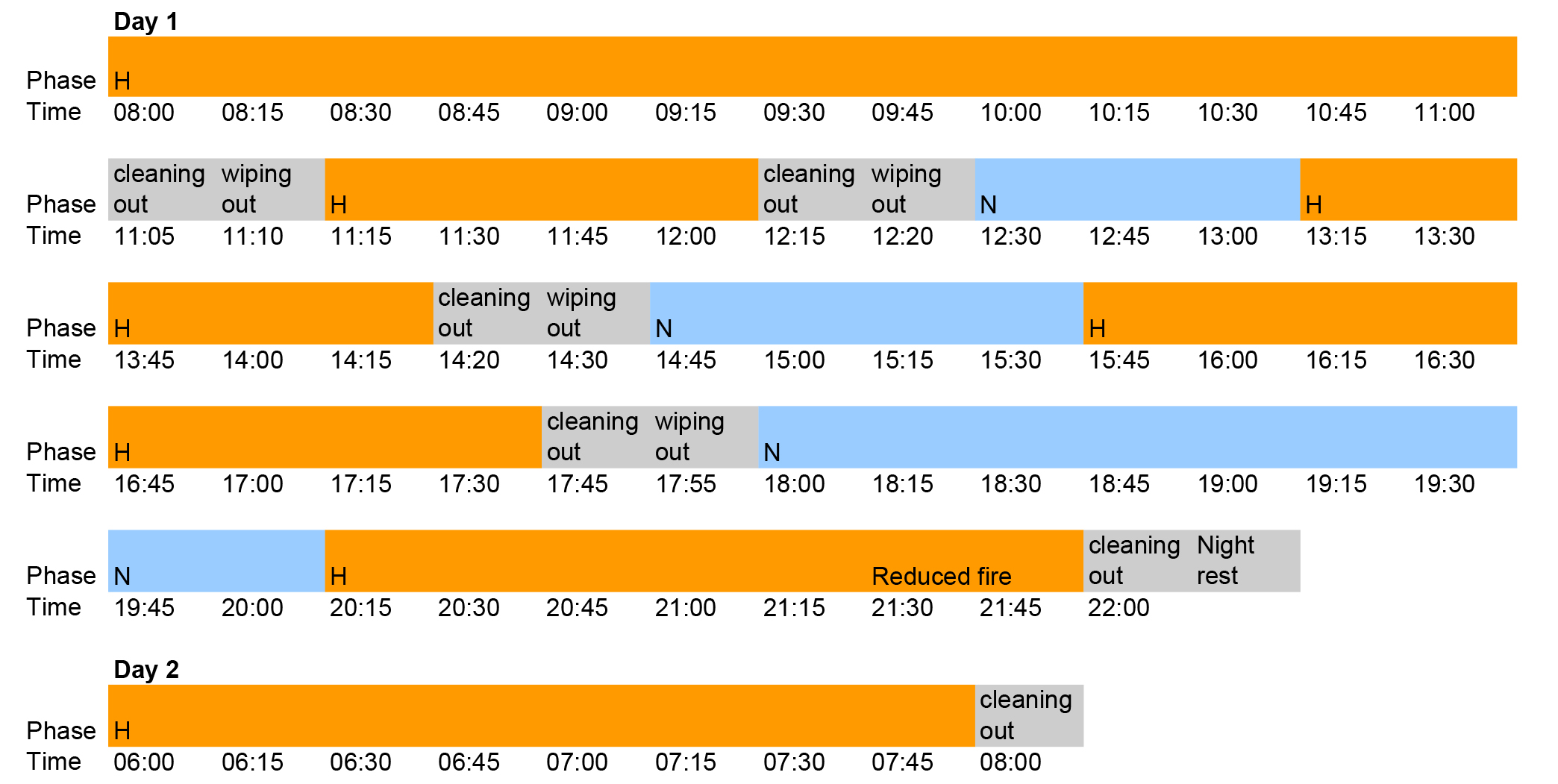 Table 1. The oven was used during the 24 hour period of the experiment.

Development of the oven´s warmth

Heating the oven takes approximately four hours. At this point a temperature of 360°C is reached. Due to the high temperature in the interior space at the end of the heating phase, the heat decreases notably during use by up to 200°C. During all phases of use the temperature never sinks below approximately 130°C. During the night´s rest it falls to 68°C.

The heat escaping from the chimney, measured directly on top of the dome above the opening, peaks between 59 and 64°C and oscillates around 40°C for the rest of the time, depending on the size and the heat development of the fire inside the oven. This shows how much heat escapes and is lost.

Temperature at the dome walls

Viewing the whole experiment, the temperature on the outer sides of the dome walls develops only very slowly, almost constantly and is relatively independent from the variations in the other measured data. It rises to a maximum of 36.4 degrees, twice as much as its initial temperature. During the night´s rest it falls by a third to 20.3°C, just slightly exceeding the figure at the start of the experiment.

Temperatures of up to 360°C can be reached in the oven. These temperatures decrease quite quickly to approximately 130°C, limiting the possibilities for baking and cooking (See Graph 1, pink line). However, the temperature rise of the dome walls (see Graph 1, blue line) develops almost constantly, unaffected by the firing phases, just like the lost warmth escaping through the chimney (see Graph 1, green line).

The base temperature of around 120°C might have been the decisive factor in determining how the oven was used. This temperature level is suitable for the preparation of all food which could be cooked at low temperatures (below boiling point) over a long period (current term: slow cooking), for example fish, some sorts of meat, vegetables, thin pasta. Even during the long night´s rest phase the temperatures decrease very slowly (by 1-2°C per hour), so it is possible during this time to kiln-dry fruit, herbs, cereals and suchlike. Hemp, wood and ceramics can also be dried virtually overnight. Because the dome is slightly warmer than the ambient room air, it could also be employed to dry wet clothes (See Figure 5).

Taken as a whole, the temperature change inside the oven influences the room air temperature only to a minor degree. The radiant heat has a significant effect at a distance of just 50-100 cm from the oven and only during the firing phases (See Graph 2, line 6 brown, line 7 black).

Even while heating up, when the ambient temperature (See Graph 2, line 11 green) is still quite low, significant temperature differences can be observed. However, the disparity is only 4-5°C compared to the outside temperature. The use of the oven does not lead to a constant room air warming.

At the points of measurement besides the oven and above the dome no considerable deviations from the common room air temperature can be noted. The dome hardly gives off heat, the differences to the room air temperature are marginal.  The quick heat rise during the firing phases at a distance of 50-100 cm directly before opening the oven corresponds with the measured data right above the chimney. The escaping heat rises quickly and concentrates under the hide, which was attached above the oven as a protection against flying sparks, and in the roof truss of the house (See Figure 7 a, b). The temperature drop during the night´s rest phase is most affected by the decrease in the outside temperature. All values progress at a similar rate (See Graph 2).

We did not detect loss of energy caused by the heat escaping from the oven, especially while firing. According to the temperatures measured in front of and above the oven door this leakage seems to be substantial. Because this heat loss ascends up to the roof, it does not warm the living room. The oven could not be used as a heating for the house.

The high temperatures of the heat loss are dangerous for anyone near the oven, because the blast is only visible when there is heavy smoke emission and alters size and flow direction (See Figure 8).

During the entire experiment 45.1 kg of lime wood were burnt. The value for the energy produced by lime wood is an average 4.1 KWh per 1 kg of wood. Thus, the wood consumption produced an energy total of 184.91 KWh. Drawing conclusions from this result is not useful, because we are short of adequate opportunities to compare with other ovens. The question of the efficiency of this kind of oven has to remain unsolved for the moment.

For logical reasons the result should be compared to other ways of cooking and heating used in the Viking era.

The experiment was carried out in summer on a quite warm day compared to the normal weather situation. The heat development inside and outside the oven is thought to be uninfluenced even by wintry outside temperatures. The process of heating-up is tedious, and the heat storage depends more on the material than on the ambient temperature. The room temperature is evidently more affected by the outside temperature than by radiant heat of the oven and so the temperature near the oven should increase only slightly even in winter.

The clay ovens in Haithabu (and elsewhere) were used universally and always over a long period. Using an oven only for one single baking or cooking process is very ineffective due to the large energy consumption during the heating-up. Therefore, this would have presumably occurred only in individual cases. Instead we can rather assume that the ovens were operated continuously and simultaneously for different purposes.

My thanks go to the museum director Ute Drews and her staff, who not only made this experiment possible, but also actively supported it.
A very special thank you goes to my comrades-in-arms, first and foremost Lasse Bodenstein, who is responsible for the entire experiment and became the "keeper of the fire." Kai-Erik Ballak has procured the measuring instruments, prepared them and and he was able to use his thermal imaging camera with me. I would also like to thank my colleague Wulf Freese, who was responsible for logistics and infrastructure.
Last but not least I would like to thank my wife Regina Donath in particular. She has helped me in many places with her archaeological expertise and accompanied me with patience during the evaluation phase. 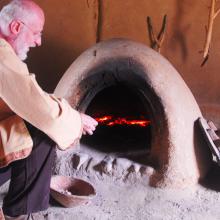 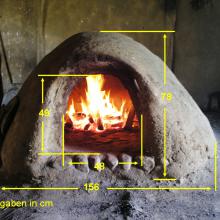 Fig 2a. Measurements of the front of… 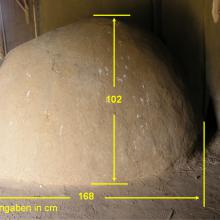 Fig 2b. Measurements of the side of the… 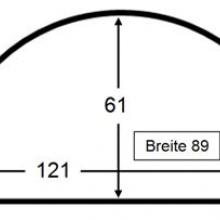 Fig 2c. Measurements of the inside of… 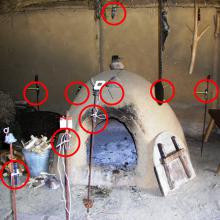 Fig 3. Measuring Points of the Clay… 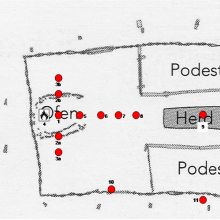 Fig 4. Measuring Points of the Clay… 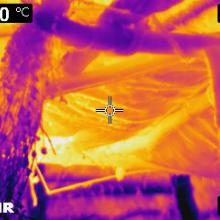 Fig 6a. Thermic image in the house.… 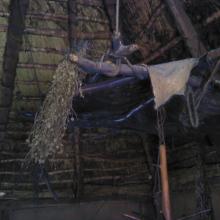 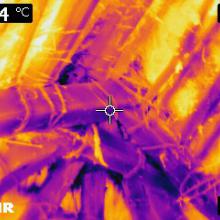 Fig 7a. Thermic image in the house.… 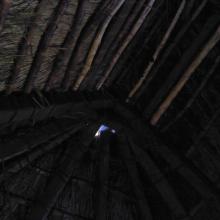 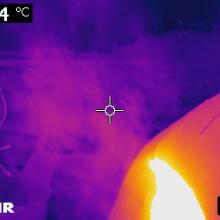 Fig 8a. Thermic image, above the oven.… 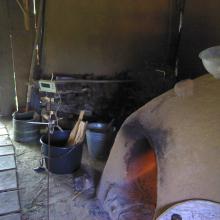 Fig 8b. Normal image, above the oven.… 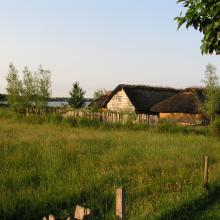 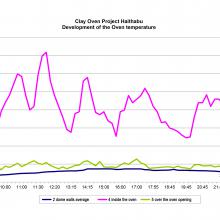 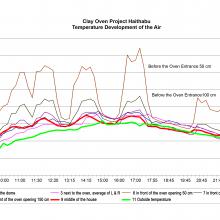