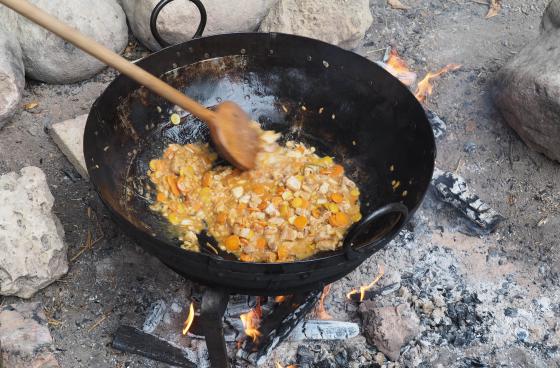 Course objective: With the resources from the people of the past a dish from the Stone, Bronze and Iron Age is cooked and tasted.

Course content: In the workshop, important aspects relating to the history of nutrition, the available food and the preparation of  dishes are presented on the basis of archaological findings and experiments. In the practical part, we will cook fish in a Stone Age cooking pit on hot stones, cook a Bronze Age stew in a ceramic vessel over an open fire, and prepare an Iron Age kettle dish. We test replicated tools and devices from the past, e.g. knives made of flint, bronze and wrought iron, millstones or Celtic roasting spits and test them for their possible uses and performance.

Historical background: Many of the eating habits of our modern European culture, which we take for granted today, have their roots deep in the past. In the Paleolithic era, people in Europe lived as hunters and gatherers and lived mainly from hunted animals (protein and fat) and from fruits growing in nature. Only when the first farmers began growing cereals and growing crops for field crops at the beginning of the Neolithic period around 7,500 years ago were carbohydrates available in large quantities. Pets such as beef, pork, goat and sheep were the main meat suppliers. Only in the course of the Iron Age did the chicken, which was originally domesticated in Southeast Asia, join them. The spectrum of crops available was relatively small at the beginning, but new plant species were added in the course of the Neolithic, as well as in the Bronze and Iron Ages, and yields could be increased both through better seeds and through more sophisticated harvesting methods. While dishes in the Paleolithic Age were mainly prepared in cooking pits, on hot stones or on skewers, ceramic pots were already available to the first farmers, which opened up revolutionary new possibilities for the art of cooking. We also know the first ovens from this time. Metal cookware was only available from the Iron Age. Some types of plants such as cereals or fruits can be archaologically established, others leave virtually no traces in the soil. However, we have archaological finds from all ages that allow us to draw conclusions about the development of the European cooking tradition.