The Prometheus Project was an experimental archaeological investigation carried out at Butser Ancient Farm, Hampshire, England, into prehistoric logboat building techniques. The project focused on exploring the use of fire in building logboats, a common method of construction in historical cultures but one over looked in prehistory. A 2.5 m long oak logboat was built using replica Bronze Age tools and fire to see if any evidence for the use of fire was left in the completed craft. The project was funded by HLF and CBA challenge funding and Butser Ancient Farm.

The Prometheus clearly shows that by using replica Bronze Age tools it is possible to use fire in the construction of a logboat without leaving any visible evidence of its use in the final vessel.

The logboat is one of man’s earliest forms of water transport, with archaeological examples from North West Europe dating back to circa.7000BC (Lanting, 2000, 644; McGrail, 2006, 32). These simple, yet effective water craft can still be found in use in modern cultures around the world (Hoelting, 2010, 193; Hviding, 1996, 183; Rodd and Stackhouse, 2008, 235). Despite this long heritage there is still very little known about the processes used by prehistoric man to build their logboats.

The Prometheusproject was an experiment carried out by experimental archaeologists and volunteers at Butser Ancient Farm, Hampshire, England. The aim of this project was to investigate one much debated aspect of prehistoric logboat construction - the use of fire. The use of fire in helping hollow out logboats in historical cultures is well documented (See Figure 1 and main image) (Caduto, 2004, 124; Rossotti, 2002, 78; Vlach, 1990, 97), however evidence for its use in prehistoric logboat construction is very limited if not non-existent (Strachan, 2010, 35). Only one of the archaeological examples of prehistoric logboats shows any visible signs that fire was used during the construction process. The Friarton Brick Works example had a small section of charring inside the hull which was interpreted as showing the use of burning in the boats construction, but the remains no longer exist and therefore makes the interpretation difficult to confirm (Smith, 2002, 78). The lack of evidence has led to the assumption that fire was not used in the construction of prehistoric logboats (Strachan, 2010, 35).

The question of why historical cultures use fire to build logboats while prehistoric boat builders do not has never been investigated. The aim of The Prometheus project was to see if it was possible, using period specific tools, to use fire to construct a logboat without leaving any visible trace of its use in the completed craft.

In order to test the use of fire in the construction of prehistoric logboats it was decided to construct a complete logboat from a 2.5 m long, half split oak trunk. The finished boat would not be a reconstruction of an archaeological find but a construct built to test the theories of the experiment. The oak trunk used for this experiment had been seasoned for 25 years. The parent tree was a victim of the ’87 storms and had been donated to the farm by the land owners shortly after. The log was then left in the open under no special conditions until a suitable project was found for it, The Prometheus Project. This is an important element to note as in most descriptionsof prehistoric boat building the tree used for the process is always felled specifically for the making of the boat (McGrail, 2004, 26; Strachan, 2010, 23). This would appear to make sense as green wood is much easier to work with than seasoned timber, especially with prehistoric tools. However the felling of the tree would have taken some considerable effort. By using a seasoned piece of timber The Prometheus project would also explore the potential use of naturally felled trees in the construction of prehistoric logboats. Current research being carried out by the author at Butser Ancient Farm is continuing the investigation into the log selection used in the construction of prehistoric logoats. This will hopefully shed further light on the differences between working with seasoned and green wood and whether natural processes can help with the construction of prehistoric logboats. Part of the focus of this ongoing research is looking into the effects of moisture levels in the selected parent log. Initial findings are showing that moisture levels have a significant impact on the construction process.

The boat would be built using replicas of bronze Sheilv pattern Palstave blades. They were exact copies of an archaeological find from the Meon Valley. The Bronze Age marks the height of prehistoric log boat construction with the largest and most complex examples coming from this time period (McGrail, 2004, 174). Over all, six tools were made for use during the experiment; two short handled axes, two short handled adzes and two long handled adzes (See Figure 2). This set of tools with blades mounted as both axes and adzes would be sufficient to carry out all the work needed in building the logboat.

It should be noted here that the outside shape of the boat was constructed using a chainsaw. This decision was made in order to save time. The outside of the boat was not an element being studied during this experiment so the use of a chainsaw in shaping it would not affect the final results.

In order to hollow out the centre of the boat it was decided to use a charcoal based fire. This would allow the fire to be managed much more easily, especially due to the lack of experience in the use of fire for this purpose. With more experience it may well have been possible that prehistoric boat builders could have used less expensive fuels. During the experiment it was soon discovered that less charcoal would be needed as first thought, as the chippings removed from the hollowing of the boat acted as fuel for the fire as the process continued.

Several methods of burning and chipping were used in order to find the most efficient way of constructing the boat. The first method was to set a fire along the centre of the boat and allow it to burn out completely before removing the burnt area with the bronze tools. This proved to be the most inefficient method used as the fire could only penetrate so much wood before it no longer had any effect on the underlying layer.

The second method used was to chip out the burnt areas while the fire was still burning (See Figure 3). This meant that the fire could carry on penetrating further down the log as the fresh areas of wood were exposed. This was, however, very hot work and could only be carried out in short bursts.

The best method developed was the half and half approach. A fire was lit on one half of the boat and left to burn for a period of time. The embers were then moved onto the unburnt half of the boat. The burnt section was then worked on with the bronze tools removing the burnt areas which then became fuel for the burning area behind. Once the area was cleared the process was repeated on the other side. This method meant that the boat could be worked on continuously.

The burning process penetrated further through the wood than the visible sign of charring. It appears that the heat helps to loosen the wood further down than the visible evidence so when chipping away it was easier to use the tools to remove the un-burnt wood underlying the charred areas.

The process of burning and chipping was continued until just before the desired thickness of the final hull was reached. This was gauged by drilling holes through the hull at different points. Once the holes were reached the burning was stopped. These holes were then plugged using wooden pegs and caulking made from sheep fleece and tallow. This method was developed from theories based on the presence of holes in archaeological examples of logboats (McGrail, 2004, 26). Once the pegs were in place, The Prometheus was complete. The Prometheus was launched at a public event and spent two days taking members of the public out for boat trips on a local lake.

Photographs of the boat being built were taken at different stages throughout the process in order to record the progress and monitor the presence of the charring in the hull (See Figures 4-6).

During the construction of the boat very simple observations were recorded concerning the effectiveness of the tools, the time the build took, the difference between working burnt and un-burnt areas and the depth that the fire penetrated. The project demonstrated that on seasoned timber it was significantly easier to remove the burnt sections than the un-burnt ones.  These were not part of the primary research question so were done purely as observations but willact as a reference point for future research into prehistoric logboat construction.

The Prometheusclearly shows that by using replica Bronze Age tools it is possible to use fire in the construction of a logboat without leaving any visible evidence of its use in the final vessel. This means the possibility of using fire in prehistoric logboat construction should not be overlooked despite the lack of archaeological evidence to support this theory. Further research could be carried out into the nature of any chemical changes that occur due to the burning process.

The experiment also raised interesting questions as to the selection of raw materials used for prehistoric boats. It is often stated that a tree was selected and felled specifically for the purpose of building a boat (McGrail, 2004, 26; Strachan, 2010, 23). The green wood on a newly felled tree would be easy to work (Echlin, Ralph and Weibel, 1975, 14), however the process of felling the tree would not be easy. The Prometheus experiment showed the potential, by using fire, of being able to use a seasoned, naturally fallen tree to build a logboat without the need to fell the tree specifically for the job.

Current research is being undertaken by the author into the selection of materials for prehistoric logboats. This research is being carried out at Butser Ancient Farm, Hampshire, England and its results will be published soon.

CADUTO, M., ,2004, A time before New Hampshire: The story of a land and Native peoples.. Lebanon: University Press of New England.

ELLMERS, D., 2004, The beginnings of boatbuilding in Central Europe. In: Gardiner, R. and Christensen, A. Theearliest ships; The evolution of boats into ships. London: Conway Maritime Press. p11-23.

MCGRAIL, S., 2004, The Bronze Age in Northwest Europe. In: Gardiner, R. and Christensen, A. The earliest ships; The evolution of boats into ships. London: Conway Maritime Press. p24-38.

Theodor DE BRY,1590, The Manner of Making Their Boats; available from http://en.wikipedia.org/wiki/Dugout_%28boat%29. 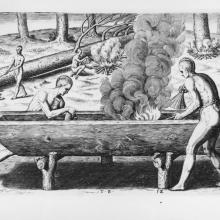 Fig 1. ‘The manner of making their… 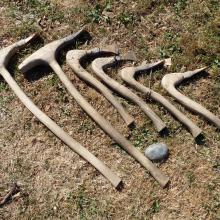 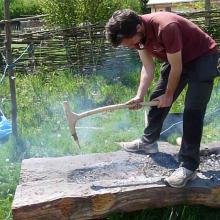 Fig 3. Working over the burning coals (… 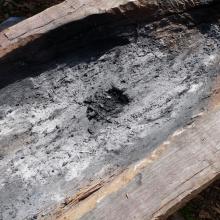 Fig 4. Picture showing the extent of… 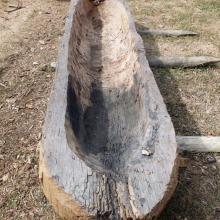 Fig 5. Picture showing both a section…