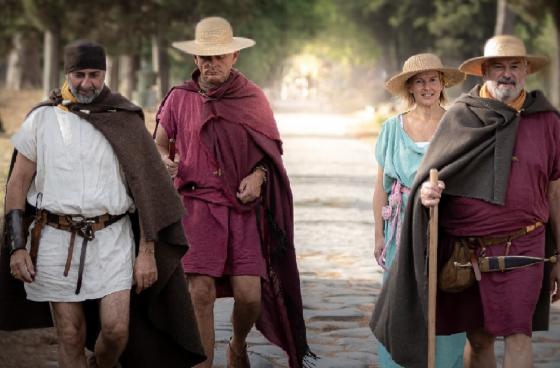 100 Euro per km, so Euro 53,000.00 in total. The largest part, more than 30,000 Euros, goes to Doctors Without Borders to help victims of conflicts, earthquakes, epidemics, and other disasters, because everyone should be able to get medical help in crisis situations. Part of this amount will be used to support our walk and our cultural mission. We do our walk in Roman civilian clothes and Roman shoes on the first paved and most famous Roman road in Europe.

The website of our Cultural Mission where you also can make a donation:  www.appia-hicetnunc.com

The via APPIA or Regina Viarum, the first paved road in Europe constructed 2334 years ago from Rome to Capua and later with other stretches to Benevento and Brindisi needs help.  We would like to achieve that the Appia regains its old status as a walking route to the beautiful regions and important and ancient villages and towns located in the south of Italy.

The APPIA, named after Appius Claudius Caecus, the Roman censor who ordered the construction of the first section of this magnificent road to Capua to be used as a swift military passageway to the south in 312 BC during the war that erupted between Rome and the Samnite people, is at present in shambles.

This is not about the small stretch that many of you have probably seen during your visits to Rome. This part has been rescued from further destruction and decay by the Italian Archaeologist and activist Antonio Cederna who managed to create the Appia Antica Park against all odds during the 1990’s. Your help, as future hikers, is needed for the whole Appian Road from Rome to Capua, where the road starts crossing the Apennines towards Benevento, Taranto and then to the end of the Appia at Brindisi.

To draw more attention to this once magnificent road and get more people to start walking on it, we, of Mos Maiorum, are going to walk the road in the footsteps of writer and explorer Paolo Rumiz and explorer Riccardo Carnovalini and other friends who, in 2015, traced the obliterated stretches of the Appia and mapped them. In 2015, Paolo Rumiz, Journalist, writer, and activist, walked the whole 532,7 km of the of Appia accompanied by 5 friends, and wrote “APPIA” a book that describes in detail the actual status of the road. He wrote, Now we just have to wish that an army of travellers will flock to the Appia and pick up the Ariadne’s thread that we have laid out on the map of the Italian boot. If they are not Italians, so be it, foreigners are most welcome.

Help us and Doctors without Borders, please donate at:

Living History Day at the Parco Livelet
22 May
Italy

Middle Ages at the Parco del Livelet
29 May
Italy