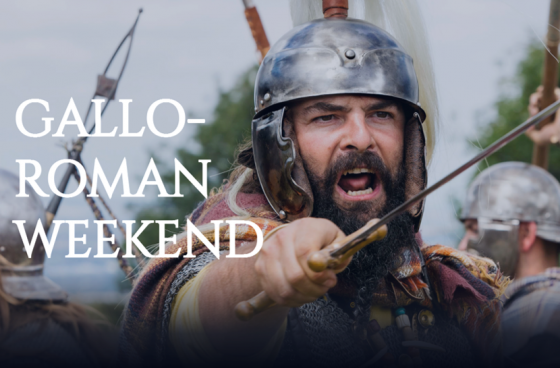 The Gallo-Roman Weekend (GRW) in Wervik is a biennial event, in which, by making use of re-enacting and living history, the Iron Age and Roman times come back to life. It takes place during the first full weekend of October in even years.

From the start it was decided to organise this festival as historically correct as possible. This is also the most important requirement that we set for our participating groups. The setting where the event takes place is therefore divided into two parts. The main area where most groups find shelter and a smaller area with information stands and more alternative approaches.

This choice has ensured that the GRW is an educatively responsible event in which the visitor learns a lot about the daily and military life of that period. Our re-enactors are all experts in their specialty. There are the soldiers, but you can get acquainted with shoemakers, basket weavers, blacksmiths, weavers,…

In addition to people interested in history, one-day visitors and families, the GRW can also welcome numerous secondary school students. The latter come in class during the weekend, a non-school day, to get to know that period better. We are visited by schools from all over Flanders and also Wallonia. Our approach being consistent with the national curriculum is proven by the fact that many of those schools have become regular visitors and have adopted this weekend in their yearly calendar.

In the past, many big names from the world of re-enacting have joined us. The Ermine Street Guard (UK), Römer Cohorte Opladen (D), Ave Bagacum (F), les Ambiani (FR), les Enfants de Finn (F) just to name a few. Others, such as the "Roman" Legio XI Claudia Pia Fidelis and the "" Celtic "Deuoxtonion, both originated in Belgium, were created by the GRW, as it were, and were also given the first chance to interact with the general public. Legio XI has since grown into one of the best "Roman" groups in Europe.