Since the early '90s of the last century I've been a re-enactor of both the Viking period, and of WW2. In my Viking persona I show kids and their parents what kit a warrior would have, such as a mail shirt, helmet, shield and sword and what the cost of such equipement would be. As a WW2 re-enactor I've participated for many years in the Commando March from Achnacarry Castle to Spean Bridge Station in the Scottish Highlands. This is a march and speed march commemorating the Commandos who were trained at Achnacarry Castle during WW2. I have also participated in several re-enactments as an Allied War Correspondent and as Glider Regiment troops at the Battle of Arnhem. Presently, I'm retired and have ceased re-enactment. 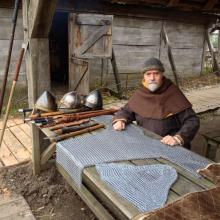 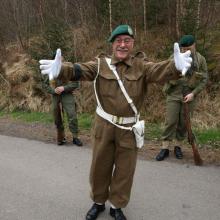