The village Nykøbing, south of Copenhagen, celebrated its 700th anniversary in 1989. At the sea passage between the islands Lolland and Falster, just outside the city, a medieval trebuchet was constructed. This was a great success – the local museum must have been very happy with 15,000 visitors in just 3 weeks time. Two years later, another similar event also attracted many tourists – a good sign that an archaeological open-air museum would be on its place here.

The area is visited by many (German) tourists: sea and beach are nearby, just like Copenhagen. That is why the website and all other communication is clearly in 3 languages: Danish, English & German.

The original idea of the Middelaldercentret was not only focussed on starting up another tourist attraction, but as well do research into medieval techniques of war. Up until the late 1980s, most emphasis in Denmark was on the Viking Age with the later periods neglected. A continuous research project has lead museum staff up to Iceland and India – resulting in local experiments in Nykøbing and interesting stories to tell the visitors.

Living history is the main way of presentation in the Middelaldercentret: not only are there professional shows with knight tournaments, the museum is in the season populated by many volunteers in medieval costume, presenting medieval life like it could have been in 1398. The volunteer approach – most of them are taking it professionally and are well trained by the museum itself – is one of the success stories of this archaeological open-air museum. They often stay for weeks in the Summer season; some of them come as far away as the Netherlands. The daily programme has plenty to select from – also for returning visitors.

A museum visit starts with the entrance building. One of the rooms is decorated like a medieval tavern with 90 places – very convincing as the modern kitchen and for example the fire detection system are well hidden. The shop is large and has plenty to choose from.
Outside, there is a special corner with “experimental machines” – this is how it all started – but there is as well a playground for kids and – when it gets serious – a tournament field. The houses in the Market street are of the second generation houses built here, soon followed by the harbour scene with ships and the merchant’s house – the absolute top scenery of the museum.

The museum has a new attraction for schools and the public - Griffenholm - a Victorian professor lives in a research station build up in the trees where he and his assistants are studying and documenting medieval beasts. 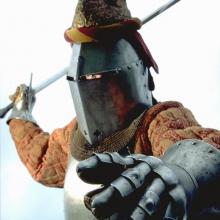 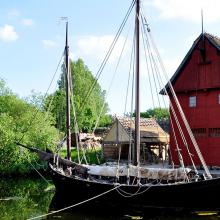 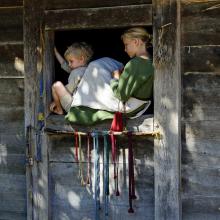 Prehistoric archaeologist. responsible for re-enactment at the center, 20 years experience in re-enactment and a castle researcher.