OKRA is an Archaeological Thematic Park that offers the reconstruction of a slice of Neolithic life as a didactic/educational instrument designed to learning of the oldest history of human being, through the trial and the knowledge of his routines and to the knowledge and comprehension about the delicate relationships between Man and Nature.

Inside the Park there is the experimental reconstruction of a Neolithic hut, areas for handmade activities, fences for animals, plantation area about cereals, legumes, plants and dyeing herbs, vegetable fibres’ plantations, a place of worship and artistic events with a copy of painted motif of the “Deers’ Cave” in Porto Badisco (Otranto-Le).

Plenty are the activities which schools can choose to be actively engaged in the area of the park. The staff, highly qualified in the field of archaeology, leads the users through an experimental and experiential approach to provide both information regarding prehistory of the region (with replicas of original archaeological finds and a Neolithic hut) and an educational tool to extend knowledge. The link with the local environment is underlined by providing also trips in the surroundings to obtain raw materials for the workshops and transform them into daily prehistoric tools.

The simulated excavation area gives an insight of what field archaeology is.

The educational activities are organised as experimental workshops about raw materials (bone, stone, earth, clay, wood, vegetable fibres and animals, etc.) and their transformation that man employed in his everyday activities.The visitors are the protagonists of these workshops: they make a dynamic experience and they are engaged with emotions, in a playful way. In this way, the visitors will implement strategies and methods, rules and working method. So kids are in very close contact with past, they live a unique moment and, remembering prehistorical man’s gestures, they observe everything is around them with other eyes and with all senses. In the workshops, visitors can make objects with the only use of natural materials that they find in OKRA. 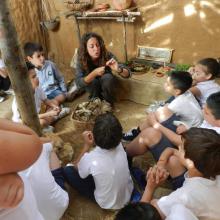 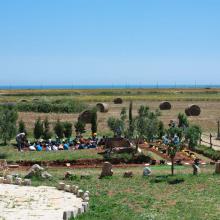 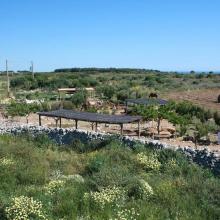 • Bachelor’s degree in Paleethnology and Specialization in Prehistoric and Protohistoric Archaeology at “Scuola di Specializzazione in Archeologia Preistorica, Classica e Medievale
– D. Adamesteanu (University of Salento);
• International Master level II in Management for the Promotion of the Cultural Heritage (Univerity of Salento – Scuola Superiore Isufi, Cultural Heritage Branch);
• Researcher specialist in the branch of supervision and diagnostic about Cultural Heritage, obtained with the PON Research and Competitiveness 2007-2013, Asse I scientific and technological area.
• IT @ CHA FORMATION – Italian Technology for innovative application in Cultural Heritage (University of Salento). Since many years he works in the branch of Cultural Environmental Heritage and he is specialized in the field of research and promotion of the archaeological heritage pre/protohistoric of the Apuliae. From 2001 to 2013 he collaborated with the teaching of Palethnology of the University of Salento and he directed a lot of companies about dig in many prehistoric locations of Salento, giving importance to their promotion through the realization of archaeological parks, staging of museum and didactic – documentary exhibits and temporary expositions.