"Life like it was 4.000 years ago". The Museo delle palafitte del lago di Ledro, dating to 1960, is one of the territorial branches of the Natural Science Museum of Trento, under direction of Dott. Michele Lanzinger. The Museum presents the prehistory from Eneolithic till middle Bronze Age based on own excavations on site. It has an indoor exposition, a park with 4 reconstructed houses and the Ledrolab for education purposes.

In the autumn of 1929, when the level of Lake Ledro was appreciably lowered to supply the hydroelectric plant being built at Riva on Lake Garda, after thousands of years a lake-settlement re-emerged into the light of day. Along the southern shores of the lake a forest of wooden piles (10.000) broke the surface, bearing all the marks of their long immersion. At first they were thought to belong to some long-forgotten sluice built to control the level of the lake, but soon they were shown to be the remains of the largest prehistoric site to have been uncovered hitherto in Italy and a site which provided archaeological evidence of European dimensions. From its remains the lake-settlement was shown to have spanned the period from the Neolithic to the Bronze Age. The news created a stir in the archaeological world.
The site was excavated and finds - including what appeared to be a hut floor (16 m²)- were recorded. Then the water-level rose once more and all was submerged, until the drought of 1936-37 lowered the level of the lake significantly and enabled further excavation to be undertaken.
These first researches, by the University and the archaeological service of Padua, saw the continuation in years ‘50 while in years ‘60 - were in order to find material to expose in the constructing Museum of pile-dwelling. In the 80s, the Natural Science Museum of Trento realized campaigns of excavations with techniques previously not available, following the stratigraphic criteria and adopting scientific naturalistic methodologies. The motivations that have determined the construction of vast lake dwellings, built on piles with the size of work that it demanded, only find an answer in the field of the hypotheses. Probably more concomitant factors are the consequence, joined to a detached ability to adaptation to specific morphologic-environmental conditions. The common and diffused opinion doesn’t find support that the pile-dwellings were an answer to the fear of “fierce animals”. Rather it can be thought, they were a special solution to several requirements connected to the subsistence economy: deforestation to advantage the agricultural activities and breeding with consequent finding of the raw materials for the constructions.

The three huts, arranged to an imitation of a part of a village, are the result of a born project wished by the Natural Science Museum of Trento. For its planning, it has been taken advantage of the collaboration of the Archaeological Service of the Independent Province of Trento, of archaeologist of the University of Trento and Padua and other scientific advising.
The new village of Lake Ledro is almost the same of the reconstruction of a portion of a built-up pile-dwelling, which could be found on the shores of the alpine water mirrors approximately 4000 years ago. The employment of wood material with sections and thickness bigger than the prehistoric correspondents and the choice of some modern building technical solutions that go away from a reconstruction rigorously based on digging data in order to concur the adhesion with the canon of experimental archaeology, are the necessity to mediate between the will to show an extract of prehistoric every day and the obligation to guarantee the maximum safety to all the visitors. The wooden platform is for half resting on the land and half suspended on piles over the river bed of the Ponale Torrent. The three huts have various dimensions and introduce the different uses of the space inside a village that based its own economy on activity like agriculture, breeding, fishing, hunting and that, through a consolidated system of exchanges with other pile-dwellings villages, could have had raw materials, objects of prestige and symbols of power. 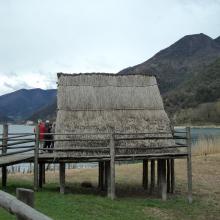 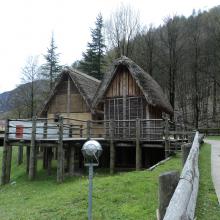 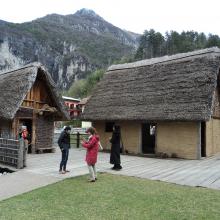 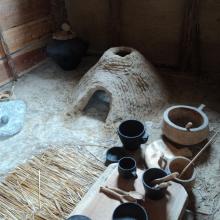