Viking Valley, Gudvangen - in the heart of the unique UNESCO listed Norwegian fjord landscape - is the setting for the town of Njardarheimr, bringing to life the real history and culture of the Viking Age.

Viking Valley is a two hours’ drive from Bergen (five hours from Oslo). Here, between the fjord and the mountains the Naeroyfjord area was awarded World Heritage status by UNESCO in 2005, and has been described by National Geographic as one of the most beautiful places on the planet.
Since 2003, the annual Viking Market and Summer Games have attracted re-enactors and public from all parts of the world for a celebration of Viking life, culture, sports and trade. This usually takes place on the third weekend in July and attracts up to 500 Vikings from all over the world. But there has always been a bigger ambition to recreate a Viking age town – where visitors could step back in time and imagine what life was really like 1000 years ago. That dream has now been realised.
Njardarheimr re-imagines the time when Vikings built the first towns in Scandinavia around 850‐950 AD. It is not intended to be a replica of any single town, but draws on evidence from archaeological excavations in the Norwegian trading centre of Kaupang (Sciringsal) as well as Denmark, Sweden, England, Ireland and Russia. As such, the town aims to show a composite picture of Northern European culture and life in a newly emerging urban Viking‐age society.
Built with local private finance and the support of our visitors, Njardarheimr welcomes everyone to become part of living history and help us build for the future, as well as the past. In addition to the initial town houses and a Chieftain's hall, plans include the building of a Blacksmith's workshop, a recreated Viking long house and a ceremonial building, reflecting the stave church heritage of this part of Norway. The town will also have a visitor centre allowing exhibitions and conferences, courses and lectures, as well as a café, bookshop and gift shop.
Our activities are guided by evidence and ongoing consultation with archaeological and historical studies. Everything within the town - from the buildings themselves, to the clothes our Vikings wear, and all of the activities going on in the town - uses our understanding of the Viking Age to recreate everyday life so that you will actually feel that you have traveled back in time.
Our gates are open to everyone interested in experiencing and learning about the Vikings, how they lived, worked and influenced the wider world. Walk our streets and become part of a living town, populated by an international community of Viking enthusiasts. 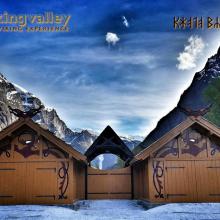 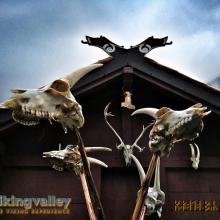 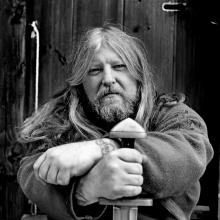