An Anglo-Saxon cemetery was discovered close to the site in 1847 as a result of gravel extraction, and since then a number of antiquarians have investigated and treasure-hunted small parts of the hill on which the settlement is situated. The site was destined to become a rubbish tip for Bury St. Edmunds and aggregates were also still being extracted, so the Ministry of Works agreed to fund the excavations, the bulk of which took place between 1965 and 1972 by Stanley West.

In 1974, the Anglo-Saxon village was brought back to life, so it was one of the pioneering centres for experimental archaeology in the UK. The early reconstructions were largely built by John Coles’ students from Cambridge University. It was designed to awaken and stimulate visitors to the site in the Anglo-Saxon origins of England.

The site is run by West Suffolk Council (i.e. Local Government) through The West Stow Anglo-Saxon Village Trust. It is a scheduled ancient monument and a heritage centre, with a primary aim to educate the visitors about Anglo-Saxon history and archaeology.  There is an associated Anglo Saxon Museum displaying artefacts from the West Stow excavations and from other local Anglo Saxon sites.  Its recent refurbishment, funded by an Arts Council grant, focuses upon key questions raised by the excavation and local artefacts.  The site also boasts an Archaeology Gallery with important collections from pre-human history to the Anglo Saxon Migration period.

The reconstructed buildings are based on archaeological evidence found on the site, some of which are in the same location as the evidence on which they are based. There are some additional buildings on the periphery of the village – shelters for the Forge and Bread Oven, and the Workshop, which are purpose-built for activities and event days.  The settlement dates from c.AD420 to AD700.

Very importantly West Stow has an Academic Committee who meet roughly every three months and make decisions about what happens in the Village. Over half of the Committee are archaeologists in one capacity or another, and the rest are made up of a manager, a councillor, an education officer and the Chairman of the Friends of West Stow. This creates an interesting balance between the archaeologists who want to see a lot of experimental work, and the realities of making the experiments work within the heritage industry.

There are about 70 different experiments in place. Most of these are long-term building projects which have been in place for about 30 years and are the main focus of the site. Some are related to crops and other plant resources, and some are short-term activities which are repeated experiments (thus giving them more credibility each time) that run for as little as one weekend or one day.  Through these activities a skills base is built up and the knowledge of authentic techniques is shared.

Experiments include:
Thatching – Different thatching techniques are used in the village to examine the most effective methods.

Pits - Long-Term experiment to examine the silting-up process of the pits under the houses. Also designed to determine whether this process happened during or after occupation of the buildings.

Fencing - Maintenance experiment to make use of both old (timber from buildings which have since come down) and natural (willow from the Country Park) resources.

Fires - Long-term maintenance experiment to examine the effect of fires in the hearths of each of the village houses, particularly the thatched roofs. Results to be compared with Sunken House (has never had a fire inside).
Pottery - Long-term experiment examining the most effective methods of making and firing Anglo-Saxon pottery using different clay mixes and techniques. 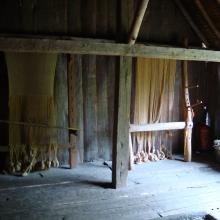