Travo’s Park, with its Neolithic archaeological site and full-scale reconstructed prehistoric dwellings, lies in the beautiful scenario of the Trebbia Valley, testifying to how this corner of northern Italy connecting Piacenza to Genoa has been continuously populated from the 5th millennium to present.

Since the early 1980s, the Soprintendenza Archeologica dell’Emilia Romagna – with the support of local volunteers – has conducted investigations aimed at reconstructing human occupation of the Trebbia Valley. Systematic surface surveys and various excavations have shown how the Valley was densely populated from the Palaeolithic to the Middle Ages, as it constituted one of the main routes between the Po Valley and the Ligurian coast.

Of particular interest were the Neolithic villages that occupied the low terraces of the river’s middle course, among which the site of Travo-Sant’Andrea stands as the most significant discovery. Two major campaigns were carried out in the 1980s. Then, from 1995 to the present day, the site has become the object of yearly excavations.

The main feature of the Park, extending for about one hectare, is that part of the original prehistoric structures of the Neolithic village of Sant’Andrea are still visible and open to the public. In particular, visitors can observe post-holes, an ancient dry-stone wall and the foundations of two sizeable buildings.

Archaeological evidence discovered in Travo, as well as in other contemporary sites, provided the basis for reconstructing two full-size Neolithic buildings, designed by architect Riccardo Merlo.

The Park hosts regular events and workshops on ancient techniques such as flint knapping, pottery, weaving and cooking. We also offer a wide range of hands-on activities dedicated to schoolchildren and teenagers concerning life in prehistoric times and archaeology in general.

Visitors can discover the Park in the company of our fully-trained guides. Facilities include a bookshop and gift shop, as well as a picnic area. The Park is accessible to disabled visitors.

The Museo Archeologico di Travo, located just a few minutes away from the Park in the fascinating setting of the Anguissola Castle, displays valuable archaeological remains from both Travo and surrounding areas dating from Prehistory to the early Middle Ages. 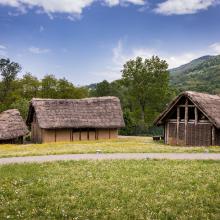 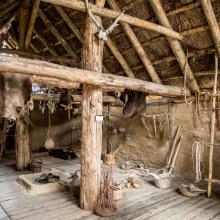 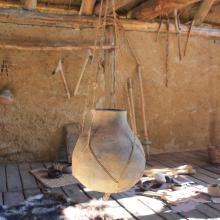 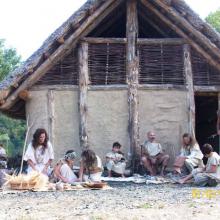 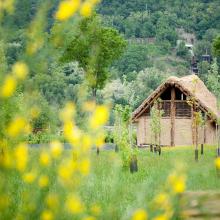 Archaeologist, PhD in Prehistory. In charge of research and all scientific aspects

Co-Founder of ArcheoVea Impresa Culturale. Specialized Archaeologist. In charge of projects, events and development in general

Co-Founder of ArcheoVea Impresa Culturale. Archaeologist. In charge of: projects, events and development in general.