Kanzach is a small village north of the Federsee in Southern Germany, counting about 500 inhabitants. In the years 2000-2004, a LEADER+ EU project was taking place here, resulting in a tourist attraction at the country side: a reconstruction of a small stronghold of the lower nobility as it could have been in the 14th century.

The village’s own original “Bachritterburg” has not been excavated, therefore, main sources came from the region. It has cost about 2 million Euro to build the wooden tower and adjacent buildings, but the museum has attracted many more visitors than planned. However, getting the finances for running the place is problematic. In 2018, the 300,000th visitor was welcomed and by now, still about 20.000 people visit the place every year. Most of them are day trip tourists and no pupils.

The Museum is in hands of the municipality. Cooperation is directly with the Federseemuseum (Neolithic & Bronze Age show case and archaeological open-air museum), but as well with the Heuneburg (Iron Age show case and archaeological open-air museum) and the Heuneburgmuseum (show case museum). Of those four, Kanzach is the one with most emphasis on “experience” as they are focussing on living history and are lacking an indoor museum.

The main qualities of Kanzach are the focus on one single moment / period in history, the early 14th century – a moment frozen in time – and the ample use of living history groups. For background information, there is a guide book, but for example no audio guides, signs or anything too modern inside the houses. The wooden stronghold, the square and the three houses form a beautiful scene. The houses are furnished, part of the artefacts are well reconstructed copies. Obviously, measures are taken to prevent theft. The fort itself has a functioning medieval kitchen with fire place, a ‘good’ room , two bedrooms and a large attic. The yard has typical gardens of that age with vegetables and fruit. The shed houses (in the season) some cows, there is a latrine, a muck heap, a smithy (site for education groups) and an exhibition of copies of 14th century agricultural tools. All tools and furniture are made to be used and therefore a weekend at Kanzach is a popular outing among living history groups. The living history concept is a great success at the Bachritterburg. The direction has very strict standards fort he quality of the living history groups at the castle. Moreover a group of local volunteers has formed who are supporting the castle during the year at events and with the general maintenance work.

There is a tiny shop at the entrance. The management of the restaurant is part of the museum since 2018 – since 2019 the restaurant started to sometimes offer medieval meals as well as modern local dishes. Still it is a modern restaurant inside a reconstructed building since there are strict laws for food service to be kept. It’s usually open on Saturdays and Sundays and of course for groups visiting the castle. 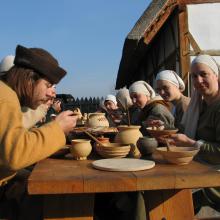 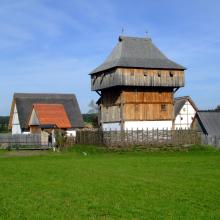 Crafting with children at the… 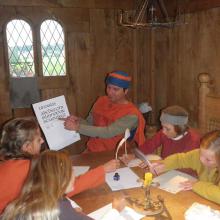 Calligraphy with children at the… 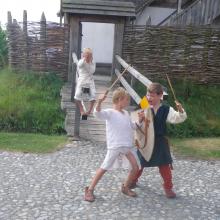 Children play-fighting at the… 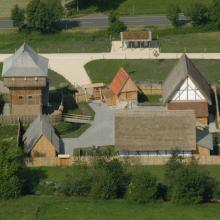 Bird's view over the… 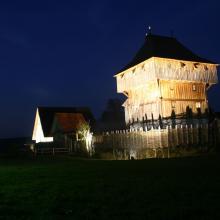 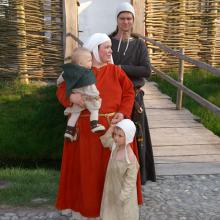 Living history scene at the gates of…