Batavialand is both an indoor museum and a historical shipyard. Here you can see how ships are built and conserved, visit the reconstruction of the 17th century VOC ship the Batavia and find out more about the Dutch role in water management worldwide. There is special attention for the province Flevoland (which includes 450 shipwrecks) and the Zuiderzeeproject.

Batavialand communicates the pragmatic Dutch mentality, shaped by the challenge of living on the boundary between water and land. Batavialand showcases the knowledge and expertise about that land and water connection: knowledge and expertise about polders, water management, shipbuilding and trade; in the past, the present and the future. Batavialand is where you are taken into the world of commercial spirit and technology. A place where Michiel de Ruyter and Cornelis Lely logically intertwine as the symbols and foundations of Dutch society and our culture. Batavialand caters to a wide national and international audience with its programmes.

The Batavialand shipyard shows how the Dutch have mastered shipbuilding over the centuries; robust ships that were capable of traversing Dutch and international waters. The shipyard will take you back to the world of historical shipbuilding, crafts and the Dutch Golden Age. The famous reconstruction of the VOC ship the Batavia lies docked at the wharf at Batavialand. Everyone is hard at work to keep the Batavia in a good condition. As you stroll across the decks, eager volunteers will tell you amazing stories about life as a sailor, the VOC, dangers out at sea and the on-board cuisine. You will feel like you are actually in the 17th century!

At the Batavialand museum, we display Dutch history, which started 7000 years ago. Did you know that the area that is now called Flevoland already had inhabitants? You will learn all about this piece of history in the ‘Primal’ exhibition! The area now called Flevoland has been around in many shapes and forms. Starting out as a landmass 7000 years ago, it turned into a body of water and finally, by the 20th century, we reclaimed it. "Land gemaakt door mensenhanden", or, 'Land made by human hands', is what we sing in the Flevoland anthem. The exact details of that can be seen in the Polderen! Exhibition, which deals with the past and the future of the Zuiderzee Works. 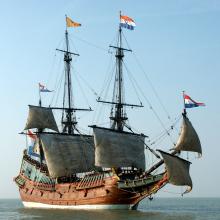 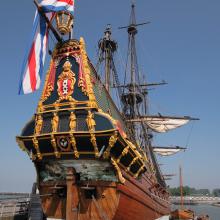 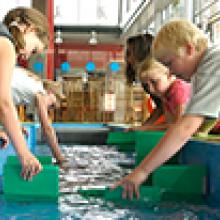 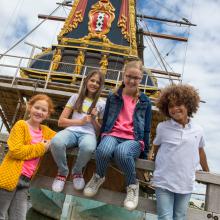 Astrid Hertog is a broadly grounded museum professional, driven by bringing culture closer to the people. Since June 2022 she has been director of Museum Batavialand. She is also on the supervisory board of the Railway Museum in Utrecht and since 2023 board member of the Association of Science Centers and Science Museums in the Netherlands. As former director of the Roman Limes Foundation, she first came into contact with experimental archaeology. She not only appeals to the 'learning by doing' as part of research, but also how we can apply that broad approach for the public: learning with head, hands and heart. Astrid's background is Art History and she also completed a Masters in Museology in London at UCL's Institute of Archaeology.

Willy van der Most is Head of Knowledge and Collections at Batavialand. This department conducts research into 'the Dutchman on the border between land and water' with as spearheads: water management, shipbuilding, shipping, maritime archeology and the Zuiderzee project. Batavialand is the administrator of the Provincial Depot for Archaeological Finds of Flevoland and of the National Ship Archaeological Depot.
In addition, Batavialand has in the Study Center the library and archives of Flevoland.

Mr Dallmeijer is specialist Schip archeology, and as such actively involved in experimental archaeology.