The village of Chavdar is located in Western Bulgaria, Sofia region, Chavdar Municipality. It is accessible via the “Podbalcan” road (I-6), one of the main first-class roads in Bulgaria. The village is located 71 km east of the capital of the country and 11 km southwest of Zlatitsa. Chavdar Municipality is part of the Zlatishko-Pirdop hollow with an average altitude of 570 m.

It consists of one village – Chavdar, which makes it the smallest in Bulgaria. Unlike the other hollows to the south of the Balkan, the Zlatishko-Pirdop hollow is characterized by low temperatures. Visitors who enjoy mountain tourism can visit the chalets “Bratia” and “Sakarja”, situated high in the Sashtinska Sredna Gora Mountain, and the natural phenomenon “The Kazans”. It is a unique natural landmark, representing 5 small waterfalls situated between three large rocks They are connected on a line with big holes about five meters and each is bigger and larger as the rivers flow in one another. From here comes the name Kazanite which in Bulgarian means the Cauldrons. The water is clean and fresh. On Petka peak is situated the eponymous chapel in the honor of the saint where every year there is festival. And in the village there is Orthodox Church “Saint Michael the Archangel”. The area of the village of Chavdar is the heir of the oldest population found in Srednogor ie. Proof of this is the settlement mound near the Topolnitsa River, which shows that life is before 7000. The archeological research of the Neolithic culture “Chavdar” started in May 1968 and with a one-year interruption ended in 1980 under the leadership of Georgi Georgiev and Kancho Kanchev. After archaeological excavations, valuable painted ceramics were found. With the participation of archaeologists from Great Britain, a stratigraphic drilling of the terrain was carried out, indicating the existence of seven cultural layers.

Topolnitsa Archaeological park is located in the village of Chavdar in “St. Petka” area. The park was officially open on 27 October 2012. There are some residential buildings constructed under a plan and reconstruction of the discovered ruins of a settlement from early Neolithic period 7000 years ago. One of the oldest cultures of South-Eastern Europe is located there. The park includes workshops for stone cannons, ceramic vessels, and leather treatment tools. In the park there is a spacious exhibition hall narrating the history of all seven cultural layers discovered in the settlement mound. The connoisseurs of the authentic experience are allowed to spend a night in the Neolithic residence buildings. Near the Archaeological park there is a sports and tourist attraction with two climbing walls of 8 and 10 meters’ height, an observation tower, a rope garden on two levels and additional facilities for the youngest visitors. Here is also the last attraction in the complex – “ Vajelandia” (Ropeland), with possibilities for climbing, jumping, hiding, swinging, et cetera. 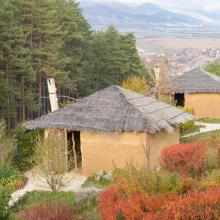 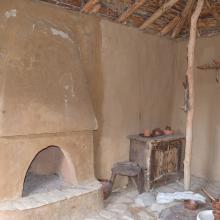