Jarrow Hall is on the banks of the river Tyne and features a museum devoted to the life and times of a Benedictine monk called Bede (673 – 735). Bede is known for an important book by means of which he got known as “father of English history”.

Jarrow Hall is operated by Groundwork South Tyneside and Newcastle (STAN); an independent charitable trust and a member of the UK-wide Groundwork federation. An 11-acre site in the heart of South Tyneside, Jarrow Hall features a museum dedicated to the life and legacy of the medieval monk and scholar Bede (673-735), an extensive Anglo-Saxon demonstration farm and authentically-reconstructed Anglo-Saxon dwellings based on structures excavated within Anglo-Saxon Northumbria Through the site, our interpretation and volunteers engaged in living history, we give visitors an impression of the world Bede would have known. Jarrow Hall works with institutions and individuals to enable experimental archaeology and research to take place on our site alongside opportunities for public engagement with such work through our visitor-facing events and immersive education programmes for schoolchildren.

The site is is situated nearby the present-day church of St. Paul, which features the ruins of the Jarrow Monastery a Saxon chancel, and the oldest stained-glass window in the world, made up of excavated fragments dating from about AD 600. The Bede Museum aims to increase public understanding and appreciation of the world of Bede and his enduring legacy of culture, science, learning, innovation, creativity and his construction of English identity.

Jarrow Hall is the only site within the north of England which tells the vernacular history of Anglo-Saxon England through its demonstration landscapeand experimental archaeological buildings. The Bede Museum also manages the archaeological finds of St Paul’s monastery, a purpose built museum and permanent Age of Bede exhibition which displays finds from the site, housing the largest collection of Anglo-Saxon coloured glass in Northern Europe. Jarrow Hall is a valuable resource for archaeology, history and theology students, with many universities and school groups visiting the site as an introduction to the early medieval period. 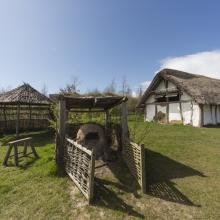 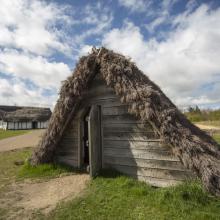 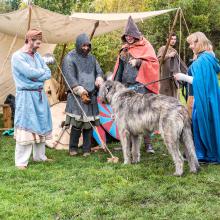 Leading on the development of heritage and culture opportunities for the trust, including the strategic delivery of the Jarrow Hall Resilient Heritage Masterplan.