The terramara of Montale, near Modena in Northern Italy, is a typical Bronze Age settlement with pile dwellings surrounded by a ditch with water and imposing earthwork fortifications.
Next to the site is an Open-Air Museum with life-size reconstructions of two houses furnished with replicas of the original finds dating back 3500 years.

Near Modena (between Parma and Bologna), in the small village of Montale, the Modena Archaeological and Ethnographic Museum opened 2004 a satellite museum: an open-air archaeological presentation themed with the Bronze Age settlement of the Terramara Culture (II Millennium BC). The “Parco Montale” – as one of the first of its kind in Northern Italy – is constructed, partly based on consultation of specialists from Germany and Austria.
The Parco has a small modern entry building, a visitor centre where the archaeology of the site is explained and an open-air area with two larger Bronze Age houses. By first visiting the archaeological centre, people get a good introduction into the open-air area.

It attracts many school groups and during Sundays just before and after the Summer many tourists as well. However the Parco is mainly used by school groups. The reason to construct these facilities exactly here are the well preserved remains of the Terramara Group. After extensive research into the remarkably many artefacts, archaeologists wanted to present the results in a very clear and direct way. A lot of attention is paid to the explanation of archaeological methods, more than in many other places. Visitors are also explained about time depth. The archaeological data are rigorously checked. The houses are designed and furnished as open-air exhibitions rather than as to be used as living history. For tourists, the Sundays are a great occasion. Specialists from Italy and abroad are presenting here activities like bronze casting, wood working, making rope or ceramics et cetera.

The park was started after the success of a big terramare exhibition held in Modena in 1987 and it was due to the common will of the Comune di Modena and the Comune of Castelnuovo Rangone. Together they financed more than 50% of the total costs. Additional resources were found with the EU project “Archaeolive” and through the contributions of local organizations (Regione, Provincia, Bank Foundation). A previous agreement was signed also with the Soprintenedenza per i Beni Archeologici dell’Emilia Romagna (which is the regional agency of the governmental department for Cultural Affairs). 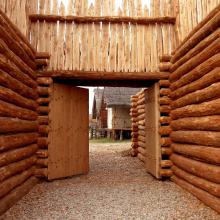 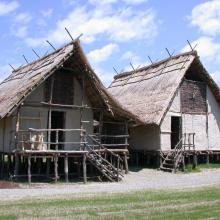 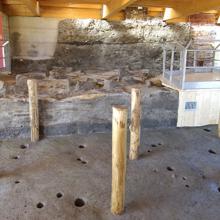 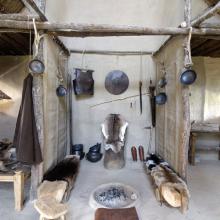 Reconstructed furniture inside the… 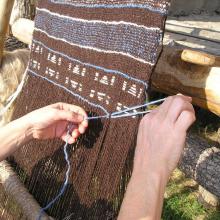 I graduated in Ancient history with a thesis on protohistoric issues. From 1987 to 1996 I was member of a cooperative society active in the field of archaeological researches and I collaborated with the Archaeological and Ethnological Museum of Modena for the implementation of scientific and dissemination activities. Since 1997, I have been working for the Museum with tasks of coordination of teaching and dissemination initiatives and I have been collaborating to the scientific and editorial activities, since 2004 also for the Montale Terramara Park.

Since 1982 to 2002 I was director of the Archaeological and Ethnological Museum of Modena and at the moment I’m full Professor of Prehistory and Protohistory at the University of Modena and Reggio Emilia. In 2004 I ended the project for the implementation of the Montale Terramara Park. Before the construction of this Open-air museum I directed and organised several exhibitions, as the one entitled “Terramare. La più antica civiltà padana - Terramare. The most ancient Po Valley Civilization” (Modena,1997). I wrote several scientific publications and I was in charge of various archaeological excavations, as the ones at the terramare settlements of Montale and Gaggio and at Bronze Age necropolis of Casinalbo.

I graduated in Archaeology in 2000 with a study on the Iron Age in the North of Italy. In 2000 I worked in the dig of the terramara of Montale and I met for the first time the Bronze Age. Since 2004 I'm in the staff of the Montale Terramara Park, where I have different tasks: I am a guide for general public and for children and I also study and draw archaeological materials from the excavation of the terramara of Montale.