Randa Ardesca - Archéosite d'Ardèche is an open-air museum which was founded in 2013 in the French department of Ardèche, and open to the public since 2014. It was founded by professionals of Living History, crafts, culture and communication, willing to have a permanent place to conduct experiments, and bring living history to the eye of the public to share their work and passion. Their project was to introduce to the public historical periods which are rarely, if ever presented in the other open-air musems of south-eastern France, namely the Late Neolithic/Chalcolithic, Bronze Age, Iron Age and Early Middle Ages, all based on archaeological records from the surrounding area. The project is now carried by a group of 16 co-presidents surrounded by volunteers.

The site's constructions are built with historical materials and techniques, most of the time in front of the public. Regularly, the site offers to anyone who wishes to partake in the adventure the occasion to join the building team, may they be experienced in historical construction or complete neophytes. These are crucial times of the year for us, allowing us to share the experience acquired over the course of the years, and to learn from people with different skillsets. This also make Randa Ardesca a very evolutive site, having each year something new to show the public.

The first project was to build a Gallo-Roman glass workshop, which is the main pole of experiments from the site since its construction. At the moment, the work of the team is focused on the 5th c. BC. Iron Age fortified gallic settlement, with the edification of housing and workshops, including a pottery workshop and an upcoming forge. These workshops are presented according to the principles of living history by organizers and craftspeople in historical costume. In the meantime, a dolmen is in construction in partnership with the museum of the Cité de la Préshitoire d'Orgnac.

Randa Ardesca hosts a local and historical brewing festival each year, during which experimental archaeologists are experimenting different historical brewing methods. This is also the occasion for local archaeologists to present their work through conferences. Our project is to show to the public differents periods since Neolithic period until the tenth century AD of Ardèche in an educational and funny way. It is also to create a place to meet local volunteers, national and international volunteers, researchers/archaeologists and craftspeople to build together and experiment around the archaeology of Ardèche.

We create exchanges around Ardèche archaeology in welcoming volunteers, students and volunteers: 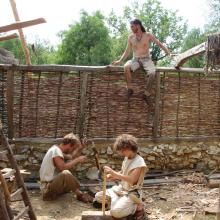 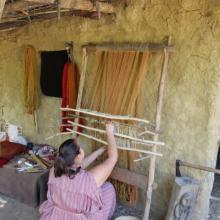 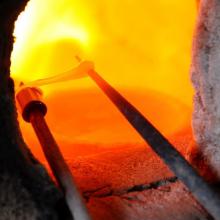 Magalie Margotton holding a photography degree, worked for few years for archaeology missions with the CNRS, notably in Syria, before creating her living History and culture enterprise in Ardèche. She is involved in the organisation of historical cultural events for museums and local authorities in all of France.
Coordinator of the project, Magalie takes care of a large part of the project's administration, from global gestion to organising each construction moments. She is also guide and cultural mediator on the site, andfacilitating the weavers, potters and "Iron Age warfare and weaponry of the Celts" workshops.

Guillaume Masclef is a cultural mediator and glassworker within the Artisans d'Histoire association. After attending University to study History and Art History, Guillaume Masclef worked for different archaeological sites and open air museums in the North of France (Asnapio in Villeneuve d'Ascq, Antique Forum of Bavay, open air museum of Aubechies in Belgium). He then started working on his research work and experimentations on the techniques of glass spinning and blowing from Protohistory to 1000 A.D. This work has been conducted as member of Artisans d'Histoire for 10 years so far. He is in charge of outreaching this work for historical events or for museums, in France and all around Europe. He is also organising cultural and historical events within the Association pour l'Histoire Vivante or in his own name.
Coordinator of the project, Guillaume is notably invovled in mentoring volunteers on the building sites, as technical referent. He is also animating the gallo-roman glass workshop and conducting guided tours.

Benjamin Margotton is a professional string-instrument maker. After studying cabinetwork and instrument-making, he created his own historical instrument-making company in Ardèche. He is reproducing musical instruments from Prehistory to the Middle Ages. He is now well-knowed in the living history and experimental Archaeology scene. His instruments are selling all around Europe. Coordinator of the project, Benjamin is one of the main technical referent for the buildings' construction. He is notably in charge of the constructions plans. He also mentors volunteers and share his technical knowledge on the constructions. He is also conducting guided tours on the open air museum.