Dr. Marquardt holds the Ph.D. degree from Washington University, St. Louis. He has done archaeological research in New Mexico, Kentucky, South Carolina, Georgia, Florida, and Burgundy (France).
Since 1985, he has directed the Southwest Florida Project, focused on the ancient domain of the Calusa Indians (present-day Charlotte, Lee, and Collier counties).  He is the author of several books and articles about the archaeology and history of southwest Florida, including Culture and Environment in the Domain of the Calusa and The Archaeology of Useppa Island. He is co-author (with Darcie MacMahon) of The Calusa and Their Legacy (University Press of Florida, 2004).
He is the curator of the 6,000-square-foot Hall of South Florida People and Environments, in the Florida Museum of Natural History’s exhibit facility in Gainesville. He has also been instrumental in the establishment of the Randell Research Center, a research and education center at Pineland, home of the Calusa Heritage Trail (www.flmnh.ufl.edu/RRC).

Soapstone (aka steatite) occurs in mineral outcroppings that run the length of the U.S. eastern seaboard through the piedmont and uplands.  During its peak usage in the Eastern Woodlands, it was mostly carved into bowl- like vessels.  Although the specific function of these vessels is not fully known, they are commonly associated with domestic uses, mainly for cooking. This is due, in part, to the ability of the material to retain heat for extended periods, making it efficient in applications requiring temperatures to be maintained for some time.  Although domestic usage is widely accepted, vessel morphology and use-wear instead suggests a variety of uses, both domestic and extra-domestic.  Four discrete experiments with replica steatite vessels have been conducted to test existing and alternate explanatory frameworks for steatite vessel usage.  This presentation describes the parameters and processes of experimentation and discusses results from materialist and cultural perspectives, drawing analogies with observed usage patterns on soapstone vessels held in archaeological collections.

Interpreting the Past: A Report on a Unique Immersion Experience
Dr. Bill Schindler

We are exposed to and learn about our past in a variety of ways.  The social, political, and economic factors influencing how interpretations are made, and the context within which we are exposed to them, all influence how we perceive history.   The typical antiquarian museum that has persisted for centuries is no longer the only model for the delivery of these interpretations.  There are now many virtual “time machines” such as experimental archaeology, open air museums, re-enactments, and gatherings that allow us to gain access to our past in a variety of ways.  During this course students were immersed in the various ways the past is interpreted to the public through site visits, behind-the-scene tours, lectures, discussions, readings, and reflection.  At the end of the course the students were immersed in an Iron Age Village where they “lived Iron Age Life” and put into practice what they learned during the semester by becoming interpreters themselves.

The intersections by which historical presentations are developed reaches farther afield than documentary evidence to include national myths, heritage, the expectations of the public, and the agendas of the curators. The public, who readily accept historical displays as true history, does not perceive this interaction.  The notion of authenticity is evoked to justify a particular historical presentation, in the process causing the public to mentally discredit other interpretations.  Nevertheless, this interplay can be lost on the public who rely upon their engaged experience to determine what version history is likely to be correct.  This paper reports upon the various ways the past is portrayed to the public that the author observed at the living history museums of Virginia and Denmark: Williamsburg, Yorktown, Jamestown Settlement, Historic Jamestowne and Sanglandet Lejre.

Glass on Fire: A review of 5 years of experiments in the reproduction of Viking Era Glass Bead Furnaces
Neil Peterson

Glass beads were a widely used form of Viking era Norse personal ornamentation. Seven production sites have been found archaeologically, although only Ribe has well-documented traces of furnaces. Using data from the excavations, and experimental archaeology, various possible charcoal fired clay cob furnace reconstructions were constructed and tested. The as yet unrealized goal is to produce a furnace that matches the archaeological remains and is capable of producing beads that match the artifact samples. This paper reviews the archaeological material and the experimental sequences undertaken over the last five years.

Since the late 1990's there has been increasing interest in the direct reduction bloomery process in both Europe and North America. The 'Early Iron' movement in North America is driven not by archaeologists, but by working blacksmiths. In this way, practical metalworking experience has been brought to bear on what are largely unknown technical processes. Although the focus is on iron production, there are clear links to the first iron smelting furnaces built historically on this continent. This presentation will focus on some of the discoveries made and lessons learned over hundreds of iron smelts by a core group of experimenters.

A striking example of a stone tool cache has recently been excavated at Fort Bragg. The Wilmore cache consists of 30 pounds of mostly unretouched rhyolite flake blanks that were transported 40 miles from a Piedmont Slate Belt source and carefully buried near a seep spring in the Sandhills, but never harvested.  This Archaic time capsule represents one aspect of prehistoric hunting organization, the logistical process of selecting, acquiring, transporting and utilizing a lithic resource.  This paper describes the cache and outlines an experiment designed to reconstruct the flake blanks in an afternoon session at this conference.

Telling about the people who lived in Florida for the 12,000 + years before the arrival of Europeans was complicated by the fact that the last native Floridian died 250 years ago. There was simply no one left whose grandmother recalled what her mother had told her about how people lived. And the peninsula of Florida, dipping into the warm waters of the Caribbean, often had climate, terrain and food sources unlike the rest of North America.
Questions kept arising: “How did they handle this problem?” “What did they use for this purpose?” “How abundant was this resource?” “How much skill was needed to make this product?” “How strong was it?”
Finally I decided that duplicating day to day tasks would at least offer some insight into the way aboriginal Floridians lived. So with family and friends, I tried replicating and using the things these people made. And the making often revealed the techniques and processes that had to be mastered. I put my experiences in the book, labelled “Contemporary Notes” and presented them with each project.

A Study of the Effects of Weathering on the Geochemical Signature of Southeastern U.S. Rhyolites and Metavolcanics Using PXRF Analysis
Carolyn Dillian, Coastal Carolina University

Portable X-ray fluorescence (PXRF) practitioners are frequently asked whether samples require special preparation for analysis, including cutting, grinding, pulverizing, or pelletizing the sample. For artifacts, such destructive preparation methods for PXRF analysis are undesirable at best and frequently impossible for museum and other important specimens. Yet for the rhyolites and other volcanics and metavolcanics that form a significant source of lithic raw material used prehistorically in the Southeastern United States, it is not known whether or not such preparation is necessary. This project aims to remedy that problem by experimentally determining whether or not surface weathering affects the geochemical signature of rhyolites and other volcanics and metavolcanics.

Early American Corn Husking – Backcountry Farm Site
At harvest time, or in gathering corn, it was a practice for every man to invite all neighbors, male and female, to assist in reaping, or husking the corn…  (James Potter Collins, 1783). During their first years, early settlers typically planted basic food crops on open land wherever available. Of these basic corps, corn proved to be one of the most useful and nourishing.  Visit the backcountry farm to learn about this important plant. Grind corn by hand. See traditional dishes prepared at the hearth. Join in the celebration of an early American corn husking.

The occurrence of bone and ivory rods dating to the Paleoindian period have been noted and discussed in the archaeological literature with little agreement on their use. Experimental archaeology provides a viable and testable means to better understand the manufacture and function of this component of the tool technology.  The application of statistical analysis and morphometric study backs this research and substantiates the experimental element while focusing the future investigation of these data and new findings from archaeological contexts.

Viking Era Bead Production
Neil Peterson
Watch or try your hand at glass bead making as a replica Viking Era bead furnace is heated and glass is worked. The furnace used is the result of 5 years of experimental archaeology, and is still a work in progress. Join the conversation on alternate interpretations of the material and furnace designs, based on your own experience trying to make beads.

The Aristotle Furnace
Darrell Markewitz
Working from clues by Aristotle and the descriptions of Ole Evenstad, combined with practical insights from a decade of bloomery iron smelting, a small re-melting furnace has been developed. About the size of a standard water pail, this furnace will produce a 500 - 750 gram 'puck' of carbon steel in roughly 25 minutes. This makes the system ideal for smaller scale demonstrations, or for those wanting to work with a bloomery type metal.
Darrell Markewitz is a professional artisan blacksmith, with over 30 years’ experience, who specializes in objects from the Viking Age. He designed, created and implemented both the 'Norse Encampment' living history program for Parks Canada and the 'World of the Norse' exhibit for the Cranbrook Institute of Science. He consulted on the Smithsonian's 'Vikings - North Atlantic Saga', and the Newfoundland Museum's 'Full Circle - First Contact' exhibits, as well as assisting a number of the institutions hosting both exhibits.
His interest in iron smelting goes back to 2001. To date he has participated in over 50 experimental firings, in Canada, the USA and in Denmark. He has documented this work in formal academic papers, a CD-ROM, and extensively on the internet: www.warehamforge.ca/ironsmelting

From Block to Blank: Replicating an Archaic Rhyolite Cache Flintknapping
This session is designed to facilitate the interpretation of the Wilmore Cache.  An experienced flint knapper(s) will be asked to analyze, interpret, and processing a variety of rhyolite replicated flake blanks from the Wilmore Cache.  This is being conducted in order to develop hypotheses concerning how this material may have been utilized.  The knapper(s) will then be asked to assess the feasibility of making Early Archaic projectile points from the replica flake blanks in order to evaluate the likelihood of this being their intended purpose.  Documentation of the reduction sequence used to prepare flake blanks and early stage bifaces, and the collection of waste debris from each stage, will allow future comparison with archaeological materials from suspected cache-harvest sites.

Firing Woodland Pottery Replicas
Joe Herbert
This session will take participants through the process of firing pots in the traditional way followed by Native Americans throughout prehistory in the southeastern Woodlands.  Replica pots made in the traditional coil-built, paddle-and-anvil manner will be fired in an open fire.  The sequence of steps for making and firing the replica pots that will be used are derived from both archaeological and ethnographic sources to be as accurate as possible.  This session will be conducted over the course of several hours, so dropping in and out is a perfectly reasonable way to participate. 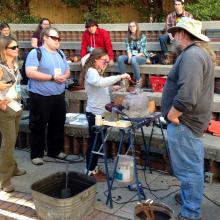 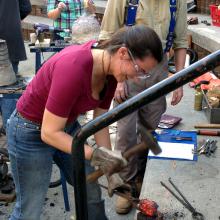 Forging a bloom with Kat Mueller and… 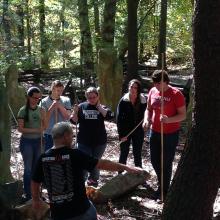 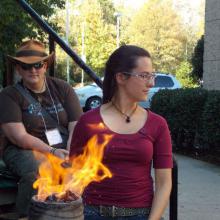 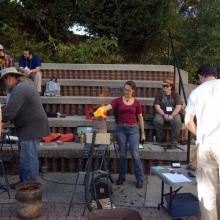