John Whittaker and Kathryn Kamp have taught anthropology at Grinnell College since 1982. Together they have worked in ethnoarchaeology in the Middle East and Turkey, experimented with various pre-industrial technologies, and conducted excavations in the American Southwest, Belize, and elsewhere. Kamp’s publications include Life in the Pueblo: Understanding the Past through Archaeology, Surviving Adversity: The Sinagua of Lizard Man Village , and Children in the Prehistoric Puebloan Southwest. Her research at the moment focuses on ethnographic and archaeological explorations of the lives of children.  Whittaker works with a number of early technologies, especially stone tools and atlatls. His publications include Flintknapping: Making and Understanding Stone Tools, and American Flintknappers: Stone Age Art in the Age of Computers. Additional information will be posted as soon as it is available.

We've all been to bad lectures or presentations in the past and we don't want to be one of those. Do you know how to avoid that?  In many ways the medium becomes your message.  No how matter how good your material is, if the presentation is poorly done your audience will tune out.  Presenting a paper has many advantages over other presentations, not the least because the content is well known to you.  Papers, however, regularly show a standard set of problems that are easily avoided. In this session Neil will review the 'do' and 'don't' items for presenting, basics of how to create a presentation, PowerPoint ideas, and many other things you need to know to make yourself a better presenter. Based in part on the excellent book 'Presenting to Win', in part on many years lecturing at Universities, Museums, and conferences around North America, and in part on many years presenting in a corporate environment, this session will help you make your presentations more interesting, and memorable.

In this digital age, emphasis is being placed on hands-on experiences.  This is particularly true when it comes to teaching students. Living history offers an opportunity for the public to experience the past as more than a classroom experience by providing an in-depth exploration of everyday life during historical periods.  Living history raises several questions regarding how history as a curriculum is developed and taught.  It also raises questions over if the public or the interpreters are the true students at living history displays.  Drawn from the author’s experience as a living history interpreter, this paper explores the role living history can play in teaching about the past.

This paper presents the results of attempts to reconstruct and replicate Middle Woodland Connestee and Pigeon vessels based on sherds recovered from archaeological sites in Jackson County, North Carolina. Experimentally produced tiles made from locally-dug clay and locally-collected tempering materials will be compared to the paste of sherds from Connestee and Pigeon series pots as a first step in replicating them.  Then comparison with more complete vessels from other sites will provide the basis for reconstructing the form of the pots in question. Finally, attempts will be made to accurately replicate these pots using local materials and techniques of the period. Performance testing will also be used to examine the different functional capacities of each vessel.

In 2012 archaeology students of the University of Leiden built a reconstruction of a Neolithic house using replicated Stone Age tools. The building process was carefully documented including damage to tools and use-wear. This presentation focuses on the building process and the methods of documenting that were used. Not all data have been processed as yet, but some results will also be presented.

There is a long history of human interaction with plants of the Aroideae subfamily (Araceae). Despite these plants’ chemical defenses against animal and vegetal predation, humans have targeted their starchy corms, tubers and rhizomes for dietary purposes. In the Eastern Woodlands of North America, early Europeans described the Native population as utilizing the highly acridic Peltandra virginica (arrow arum) for subsistence needs. In order to render this resource edible, however, the acridic principle first needs to be eliminated. Our study investigates the affect these processing activities have on the integrity of arrow arum starch grains. Findings from this study demonstrate that environmental variables specific to individual processing procedures may be more influential on starch grain survival than simply the temperatures reached during cooking.

A group of modern flintknappers participated in an experimental test using copper hammers (percussion instruments) in biface reduction exercises to explore the potential for copper trace residues on detached flake platforms. The findings show distinct material types; those with the greatest frequency of markings and implications for similar materials to exhibit traces in like toolstones within prehistoric lithic production systems.

This presentation reports on a multi-year set of experiments in organic tool manufacture conducted with undergraduate students at Oberlin College. Elucidating raw material selection and tool manufacturing strategies of the past is the primary focus of the Osseous Materials Research and Education Project (OMREP) at Oberlin.  The tools we employ range from flint burins used to painstakingly groove elk bone and antler, to Excel spreadsheets and statistical methods.  Along the way, our experiments also reveal something about learning practices – of both prehistoric toolmakers whose products inspire our work, and college students engaged in experimental archaeology.  Questions we will address include: What can we infer about ancient artisans and their approaches to creating tools from organic materials, whose physical structures are heterogeneous, and whose properties change as they age? In parallel, what educational lessons emerge from a novel course of experimentation undertaken by a dedicated but shifting roster of students who differ in their skills and styles of practice?

Waties Island is an undeveloped barrier island along the South Carolina coast that contains evidence of multiple prehistoric occupations. This dynamic environmental setting provided a range of habitats for the exploitation of terrestrial and marine resources, with a specific emphasis on the use of shellfish available locally and seasonally. An extensive shell midden, excavated in 2013, revealed few stone tools, raising the question of whether prehistoric occupants substituted shell tools for similar purposes. Using experiments conducted by students at Coastal Carolina University as a comparative data set, this study attempts to identify the use-wear signature of expedient employment of shell as cutting and scraping tools. These experiments are then used to assist in the analysis of shell from the midden at Waties Island.

This paper reports on experimental research utilized to address questions from archaeological excavations conducted in the summer of 2013 in Queen Anne’s County, Maryland.  The site, 18QU485, contains an extensive oyster shell midden resulting from repeated seasonal oyster procurement and processing during the Late Woodland period.  Experiments were designed to identify residues of a variety of oyster shell processing techniques that may have been available prehistorically.  Residues and tool marks from the experimental processing was then compared to the archaeological data to identify patterns in oyster shell processing at Indiantown Farms.

Flint and steel fire making is a popular and proper educational activity/demonstration featured at most eighteenth century living history sites and events.  A renewed examination of the artifacts and first-person accounts of the era now questions the accuracy of such presentations. Are these commonly offered methods fateful portrayals of period-correct fire making procedures or merely unquestioned repetitions of late twentieth century re-enactment lore? A series of experiments based on late eighteenth/early nineteenth century sources suggests an experientially-based set of tools, methods and terminologies that may finally bring us closer to the true fires of history.

Woodsmoke and crisp autumn air signal a change of seasons.  With the completion of early harvests, backcountry folk gathered for fellowship and frivolity.  Visit the pioneer farm to glimpse daily life in the late 1700’s.  Try your hand at an assortment of traditional games and amusements familiar to the backcountry settlers of the period. With All Hallows Eve approaching, learn about the real story of Jack’s Lantern!

Egyptologists believe the Old Kingdom Egyptians understood the pulley but could not fabricate a practical one because they, being in the Early Bronze Age, lacked the requisite metal for a high strength pulley axle.  But it is contended that the Egyptians could have plausibly fabricated a rudimentary, robust pulley (of limestone, granite, and/or copper) -- a polished cylinder which rotates in an open cradle with a polished, mating surface -- the “Egyptian Pulley.” The portion of the cylinder contacting the rope would be grooved/roughened to prevent rope slippage.  Except for this grooved area on the cylinder, appropriate lubrication, for example, flax oil, would have been utilized on the mating surfaces.  An Egyptian Pulley, fabricated from limestone, was recently used in a full scale demonstration to lift a 5,000 pound weight to show that it could have been used for the construction of the Great Pyramid.

Each of the six posters describes different aspects of our class project on reproducing Widdle Woodland ceramic pastes and vessel forms in order to test their relative strength and suitability for cooking. We are focusing on how well the pastes resist breakage from compressive force, striking force, and thermal shock. Further tests will show how well different shapes of bases distribute heat in cooking.

Forging the Viking Age
Markewitz, Darrell, Wareham Forge, Ontario, Canada
Scandinavian culture was known for the quality of its metalwork, especially in iron. Just how did the tools available effect the creation of the object? Is there an effect from the qualities of the metals available themselves? Join artist blacksmith and Viking Age specialist Darrell Markewitz for this combination demonstration and hands workshop session. A reconstructed 'sand table' charcoal forge, along with replicas of Norse blacksmithing tools, will be used. Those wishing to participate need to be dressed in natural fibre, long pants and work boots (jeans and T shirt ideal).

Telltale Damage on Scrapers of the Hamburg Culture: Make your Own!
Diederik Pomstra, Netherlands
The original end-scrapers from the Hamburg Culture show damage that appears to be linked to the production method. From already made blades we will fashion these scrapers ourselves with hammerstones and look for these telltale signs. 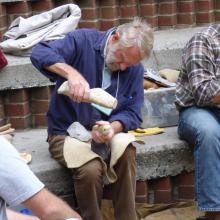 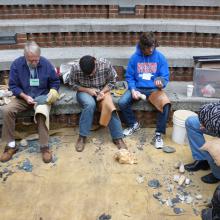 Flintknapping workshop at the Schiele… 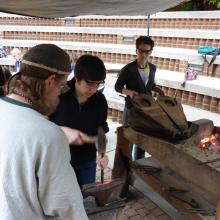 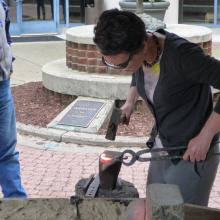 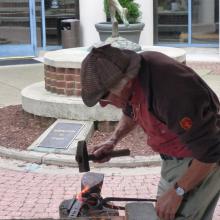 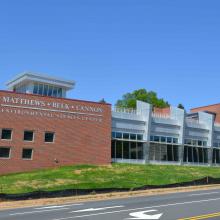 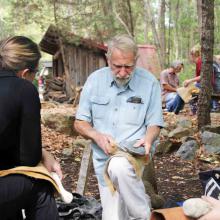 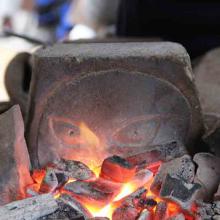 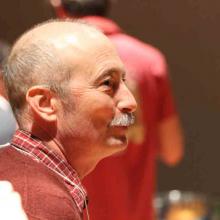 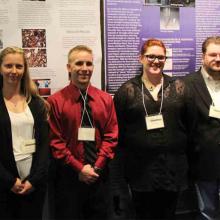 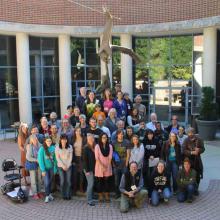