At Mitterkirchen, in the local area called Lehen you will get acquainted with the life back 2700 years ago, in the Iron Age period referred to as the Hallstatt Era. Excavations of about 80 graves took place here in the 1980s leading to the construction of an archaeological open-air museum with over 20 houses and workshops.

Also, a grave mound has been constructed the way it could have been like in the Iron Age in Mitterkirchen, and it is even accessible. The village is known for its Iron Age pottery and metal object reconstructions. The museum regularly offers workshops with different themes. Of course there is also a restaurant with hot and cold meals. The museum has regular exhibitions and documentaries. When the archaeological open-air museum opened with the grave mound and three houses ready the interest of visitors was that high, that soon it was decided to enlarge the museum presentation. In the first 15 years, over 350,000 people visited the Keltendorf Mitterkirchen. The Keltendorf is the 5th most important employee in the village. The Marktgemeinde Mitterkirchen im M. is being supported with scientific advice by the Landesmuseum Oberösterreich, Abteilung Ur- und Frühgeschichte.

The weaving workshop houses replicas of two looms. There are courses in primitive pottery in the pottery.

One of the highlights of the Celtic village is the walk-in replica of a Hallstatt grave mound. This is reconstructed after the excavation findings of Mitterkirchen. In addition to the bronze ornamental procession and funeral wagon, on which a woman of the local ruling class buried lay, you can see the extremely sumptuously crafted harness, a multipartite set of (specially prepared for the entombment) food and beverage vessels, a dinner service and much more. The burial mound also shows annually changing exhibitions.

In the wood workshop one can try (at appointment) simple craft techniques of the Hallstatt period. Here, as well as in the museum workshop and the metal workshop workshops take place, for which one can register at the cash register.

The mansion has its own sleeping and storage room and a wooden planked, covered porch. The interior of the house was reconstructed on the basis of primeval picture friezes on bronze buckets, situlae. These are among the few known pictorial representations of the Hallstatt period. Among other things, they show excerpts from celebrations in which furniture and everyday objects are clearly visible. The window openings of the manor house were divided into fields for testing of prehistoric methods with natural branches and covered with wet-applied animal skins.

The largest building by far is the Queen's Hall which can accommodate up to 120 people. The building is equipped with a solid concrete floor and it has a stage. Part of the building was constructed using tools similar to the ones from the Celtic period.

The winter house was built in block construction. It is a combined residential stable house, at the back of which there is small cattle run. This firmly attached house has a raised floor, which protects the interior from moisture. It was also a little warmer under the same roof due to the shared body heat of humans and animals. The living room has a cooker in the corner with a movable arm for a kettle, which was also used to thaw snow for drinking water. The windows were closed with translucent cattle intestine.

The granary is constructed with charred posts, offering protection against floods and pests.

The summer house consists of a living room with covered porch. Underneath the covered porch of the summer house is the opening of a storage cellar, closed by a wooden cover, which was used in summer to keep food supplies cool and over the winter to store seeds for cultivation in the coming year. The "upper floor" is accessible via a climbing tree.

In the bread bakery, flatbread is often baked. The firing of clay pots takes place in the ceramic kiln. 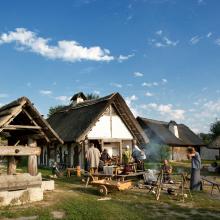 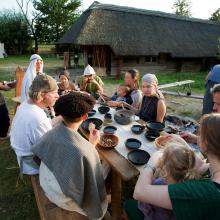 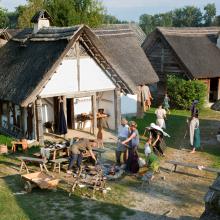 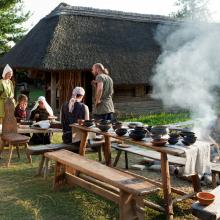 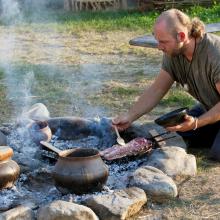