The “new Land” Flevoland in the Netherlands is not only home to many people, it also contains some splendid nature. In one of the nature parks, at Lelystad, a Stone Age settlement is situated. This area was home to Neolithic farmers before it got too wet and flooded.

The story of Swifterkamp begins with the meeting of some lecturers and someone from Staatsbosbeheer (the Dutch Forestry Commission) who all shared a great passion for archaeology. Their wish to create a Prehistoric settlement in Flevoland for educational purposes soon became reality.

In November 1987 the Stichting Prehistorische Nederzetting Flevoland (now called Swifterkamp) was founded. Soon after, the construction of the first Bronze Age buildings began on a location now known as Natuurpark Lelystad. Many schools came to this Bronze Age settlement to experience ‘life as it was in the past’. Around 1998 plans were made for a relocation, which was difficult because of the immovable buildings. Instead of building Bronze Age buildings again, there was chosen for a different time period: the Stone Age. This was decided because new excavations in Flevoland had shown that people had been living in and around Swifterbant and Schokland during the Stone Age. Archaeological objects were found that could not be connected to an already known culture. This newly discovered culture was named after the archaeological site where the first objects were found: the Swifterbantcultuur. With the use of archaeological plans from Schokland (Site P14) two Stone Age buildings were constructed at the new location, which was also at Natuurpark Lelystad.

Around the year 2000 everything was ready so schools were able to book their school camps at Swifterkamp again. We are organising these camps and short visits to this day and do so with absolute pleasure!

Since 2017 we have teamed up with study association Bachur from the University of Groningen. Students are doing research on Mesolithic huts, hearth pits and everything Prehistoric that might be of interest for their studies and Swifterkamp. A partnership that works both ways, scientific research as a backbone for what we are doing at Swifterkamp and at the same time a location where students are able to explore the importance of experimental archaeology. Recently, a special study group within Bachur has been set up to be able to continue this partnership in the future. 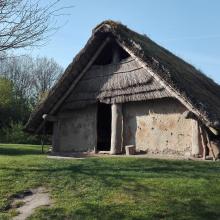 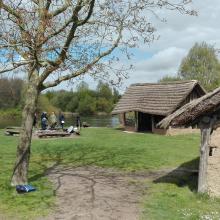