Since 2005 I am active in living history fighting as a gladiator and founded in 2006 my own group, the Hamburg-based LVDVS NEMESIS. With that group, and since my move to the Netherlands in 2018, also with Lvdvs Versvlativs I appear as a female gladiator in the types of provocator and murmillo/secutor at various events, such as museums festivals or the self-organized international gladiator training 2019 at Musempark Orientalis in Nijmegen. Since the beginning of my LH activity, I have done extensive research on gladiatorial topics and written several articles, mainly for Ancient Warfare and Ancient History magazines. My big project is writing a book about female gladiators. It is important for me, especially at school events, to show that there were also women fighting in the arenas of Rome, and so bringing an acceptance of this topic to girls and women and hence acting as a kind of role model for them. Another point of interest is, to show how to represent female gladiators in an accurate way at re-enactment/living history events. 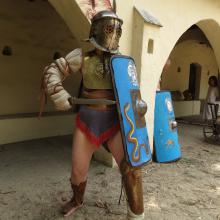 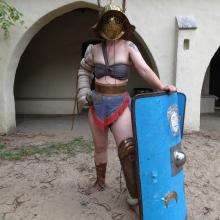