I am a PhD Candidate in Prehistoric Archaeology and Osteoarchaeology at the Aristotle University of Thessaloniki, Greece.

I completed my Postgraduate studies in Prehistoric Archaeology in the Aristotle University of Thessaloniki, Greece, with a specialisation in Human Osteology (Erasmus+ for Master students in the University of Sheffield, UK). My master thesis was about the pyrotechnology and the effect of fire in the manipulation of the deceased in the Aegean Bronze Age through experimental approaches.

My PhD dissertation is about the effect of fire on the human remains in prehistoric Crete through macroscopic and analytical methods. The case study bone assemblage, which has been selected for my research was derived from the recently excavated Early Minoan cemetery (early 3rd mill. BC) at Koumasa, Crete, Greece.
My research interest focuses on the study of burned human remains and the understanding of the heat-induced changes on bone structure.

Cremation is a burial practice, which has been adopted by numerous cultures throughout time and space. Experimental archaeology can play a major role in the understanding of the pyro-technology and the changes in bone structure related to the fire. Although destructive forces of fire alter biological features of bones, they may also provide valuable information on the intensity of the fire, the duration of burning events, the amount of raw material which was necessary for the manipulation of fire, the original atmosphere and the place of combustion and the pre-combustion of bones. Experiments also help to define differences between bones burned in different stages of decomposition (fleshed, semi-fleshed or without flesh). Carcasses and skeletal tissues of modern animals are often used in archaeological experiments in order to create analogies with the past, playing an important role in shaping the way archaeologists understand the activities and behaviour of prehistoric humans. In the majority of the experiments, domestic pigs (Sus scrofa domesticus) were selected. Even though there are small differences in the biochemical characteristics between pig and human bone, it is believed that they mimic human decomposition due to similarities in the microstructure, body weight, diet, gut bacteria, and subcutaneous fat distribution.

The experimental part of my research was complemented by the macroscopic as well as microscopic and analytical examination of selected archaeological burned bones in order to begin the building up of a database on the conditions, the technology and the effect of fire on human remains from the prehistoric Aegean. In particular, features of macroscopic alterations on the bone due to the effect of fire were recorded systematically from both experimental and archaeological samples. The methodology includes the recording of heat-induced changes to bones involving colour change, propagation of fractures and changes to the mechanical strength of the bone, e.g. warping, shrinkage and deformation. 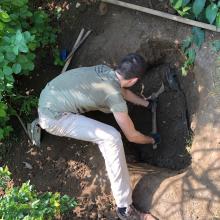 The unearthing of the semi-defleshed… 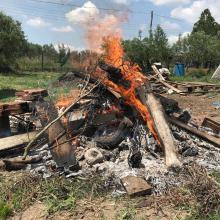 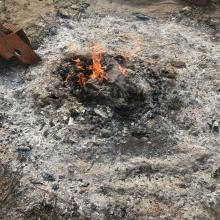 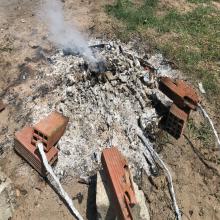 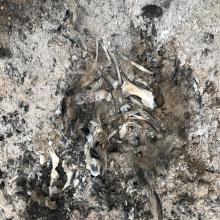 Semi-defleshed bones after 8 hours of… 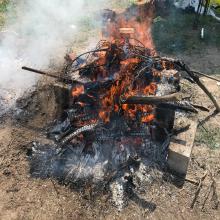 Experimental Approaches to Archaeology: The Burning of the Dead
1 Apr - 2 Apr