Butser Ancient Farm is situated in the South East of England, approximately 50 miles to the south of London. The concept of replicating an ancient farm began life in 1970 as a research project developed by the Council for British Archaeology and the Research Committee on Ancient Agriculture from the British Association for the Advancement of Science.

Sufficient funding was obtained from the Woolfson Foundation, to allow the farm a three year period in which to become self-sufficient. The aim of the site was to investigate ancient farming practices and animal husbandry through hands-on research, which would in turn support or dispel commonly accepted theoretical beliefs about pre-historic life. With the British climate at the time closely resembling that of the late IA, this was deemed the most suitable time period for the farm’s research. Experimental archaeology was in its infancy at this stage and the idea of exposing theoretical knowledge to rigorous experimental testing was a relatively new and controversial approach. Under the directorship of the charismatic Peter Reynolds, this ‘laboratory’ quickly established a reputation as a trail blazing site for experimental archaeology. Peter’s academic background and experience as a Classics teacher meant that his research was conducted with scientific rigour and it was this that set his work apart from more generalised ‘experiential’ archaeology. Reynolds and his team began by constructing a number of round houses using archaeological evidence as the basis for his buildings, and engineering principles to fill in the gaps. Farming the surrounding land was done strictly according to archaeological evidence of Iron Age techniques. Peter’s PhD research on surplus grain storage in particular was ground breaking and illustrated in practical terms how Iron Age life was far removed from previous notions of a subsistence, hand to mouth lifestyle. Following the end of the three year funding period, financial support had to be obtained from other sources in order to ensure the survival of the project and the farm. Raising the money for maintenance, staff wages and other administrative costs was a constant battle. Public access to the site became a major source of income, though in the early days of the farm this sometimes proved a conflict of interest between being a research facility, and an open-air museum. Despite these issues Peter’s zeal for experimental research continued and as a result Butser had great influence on how both archaeologists and the general public across the UK viewed the Iron Age. The opportunity to study the farming calendar over a long period of time, and to observe key processes of decay in pits, post holes and ditches was essentially unique for its time. Peter’s work became internationally renowned and over time other sites across Europe adopted the Butser model, for example with long-term crop monitoring experiments in Spain and Hungary. In addition to Peter Reynold’s experiments on IA houses and farming practices, he was also commissioned to construct a working Roman hypocaust system modelled on the archaeological evidence from Sparsholt villa near Winchester. Progress was slow and hampered by the trickle of funding, but ultimately he was able to prove that the system operated effectively. In 2002, the Discovery Channel commissioned the construction of a Roman villa at Butser. The ensuing experience was documented in a series called ‘Building the Past’. This villa incorporated the hypocaust system previously constructed on site. Sadly Peter Reynold’s premature death in 2001 meant that he was never aware of this exciting development and the challenge was realised instead by his partner Christine Shaw, who strove to keep the farm operating in his absence.

Since those days, Butser Ancient Farm has developed significantly. It currently operates under the umbrella of Butser Education CIC, directed by Maureen Page and Simon Jay. The site now features housing and structures based on documented evidence ranging from the Neolithic up to the Saxon era. The farm still encourages both academic research and public visits alike, but its main focus is to serve as host to over 30,000 school children each year. What is taught is carefully tuned to fit with the national curriculum. Visits are focused on a particular topic, for example the Roman occupation of Britain, and children participate in a range of hands-on activities which consolidate and bring to life their classroom based learning. In addition the site runs workshops on ancient crafts and technology, holds themed events focusing on aspects of ancient life and even hosts the occasional wedding. There are guided tours, demonstrations of cookery, metal work and bronze casting as well as a weekend club run for children interested in archaeology. Furthermore, the site hosts many university students over the course of each year who are studying a range of subjects related to archaeology and heritage management. The experience this provides for students is hugely influential in shaping future careers and research, and remains a fundamental part of the farm’s mission to educate. Finally, there is a shop selling local produce and a café supplying drinks and snacks. The management’s open minded approach to ways of generating further income has enabled the farm not just to survive, but to thrive financially. As such, Butser Ancient Farm remains an international example of how an archaeological open-air museum can successfully incorporate experimental archaeology. 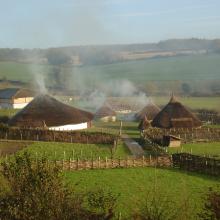 Butser Ancient Farm: The Farm, with on… 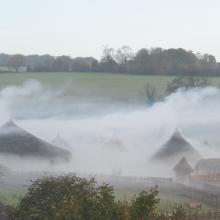 Butser Ancient Farm: The Farm in the… 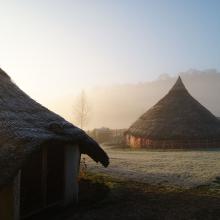 Butser Ancient Farm: The farm from…

As experimental archaeologist, I help to co-ordinate all aspects of experimental archaeology projects at the farm including research, practical construction, monitoring, recording and reporting. I also work with universities and other organisations to develop new partnerships and collaborative projects, develop public engagement activities and work with placement students and volunteers.

As Project Archaeologist at Butser Ancient Farm, I work in collaboration with colleagues on the conception, development and construction of experimental structures; including buildings, mosaics, and ancillary structures. My role also involves the documentation of those projects, as well as helping publish and disseminate our work to specialist and general audiences.