Located in the suburb of St Fagans to the North West of Cardiff, the museum was created in 1946 in the grounds of St Fagans Castle at an area of 100 hectares. Besides dozens of ethnographic (original) buildings, moved to the site, the museum has a reconstructed manor house in Elizabethan style and three Iron Age like roundhouses. St Fagans is one of Europe's leading open-air museums and has been voted the UK’s favourite tourist attraction.

In 2005, the roof of the stone walled roundhouse needed replacement. Unlike at other sites, the houses are surrounded by trees and ore not that well exposed to wind and sun. This led to the accumulation of algae and rotting. The roof was replaced by The Roundhouse Project. The old roof had already been removed a few years earlier. The new framework was made of stripped ash poles using three ring beams to spread the pressure of the rafters down the roof. The roof was covered in horizontal hazel spurlins which held the thatch. It took six weeks to build the frame, and six weeks to thatch.

In 2007, the Moel y Gaer house needed replacement and a scientific discussion was started on if this house could just as well have been built with turf walls – or not. In the end it was decided not to do this, although not all archaeologists were on one line.

The museum is a supporter of living history and craft demonstrations / workshops throughout the season. At specific events and festivals, there is music, drama and theatre. 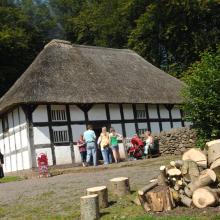 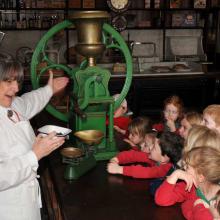 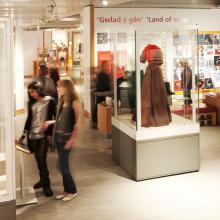 The National Museum of Wales, inside

My role is to develop proposals for more early period reconstructions and experimental archaeology, and to ensure our work balances the interests of the academic community and our 600,000 visitors. This is a new post which was created in 2010 as part of a major redevelopment of St Fagans National History Museum.