The Israeli Forum for Experimental Archaeology was established in order to connect archaeologists, field and laboratory researchers and practitioners of ancient crafts, with an emphasis on collaboration, knowledge sharing and public engagement.

Our members come from a range of fields; academics, Living History groups, museum workers, educators, craftspeople, archaeologists and more. Thus, we aim to link persons involved with experimental archaeology in Israel and create a place to share, consult and learn, along with other experts engaged in the field. In addition, we endeavour to create experiment databases and coordinate experiments, workshops, and conferences. Our dogma is that through experimental archaeology, people from different backgrounds can advance research by sharing knowledge, experience and facilities. 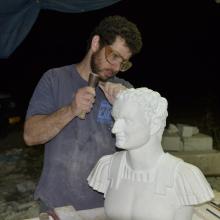 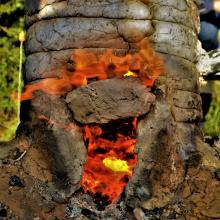 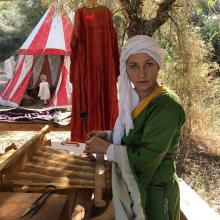 Yarden is a Ph.D. student in the track for the study of archaeomaterials and conservation sciences at the Ben-Gurion University of the Negev (BGU-TACS), focusing on ancient iron production technology. Following the investigation of a Neo-Assyrian iron workshop during his M.A., his doctoral dissertation explores legionary iron production in Roman Judea\Palestine, based on excavations of smithies and artefact analysis. During his research Yarden aims to apply experimental archaeology to supplement the results of his field and lab work. Furthermore, through his research, both in Israel and abroad, he is experienced in characterization methods for various materials, such as pottery, metals, obsidian and stone.

Gennady has studied Eastern European studies and has an M.A. in Biblical Archaeology from the Hebrew University of Jerusalem. He is presently the chairman of the Israeli Medieval Living History group “Regnum Hierosolymitanum”. The group re-enacts the lives of inhabitants of the Levant and the Crusader Kingdom of Jerusalem, during the second half of the 12th century AD, on the eve of the Battle of Hattin. In addition, the group has begun recreating life at the province of Judea during the 1st century AD. Besides initiating the international Battle of Hattin project along with a number of other Living History projects in Israel, Gennady is an active participant in similar projects internationally. He also provides Living History lectures and workshops in museums, schools and national parks, specializing in medieval arms and armour, historical European fencing, blacksmithing and metallurgy, textiles, weaving and medieval fashion.

Anna is a research archaeologist in the Israel Antiquities Authority, where she oversees a number of large-scale excavations, mainly of late prehistoric sites. She is currently completing her Ph.D. in the Hebrew University of Jerusalem, studying Pottery Neolithic cultures. Specifically, she is interested in the mechanism of the advent of pottery production as well as mud and mudbrick construction techniques. Anna wishes to utilize experimental archaeology as a tool to better understand the ways of production and usage of artefacts, as well as a way to link craftsmen and researchers.