“Delphi” in Araisi: cross European relations – then, now and in the future 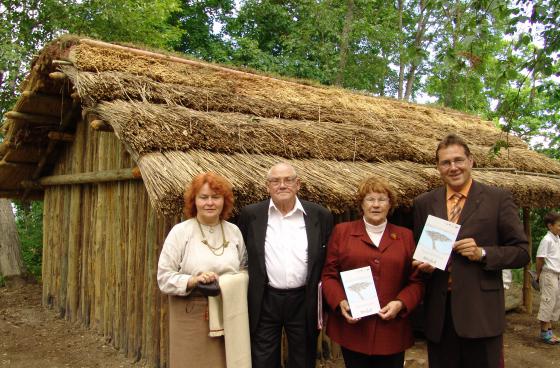 90 km north of Riga in Latvia, at Araisi Lake Fortress near Cesis, by the end of June 2005, the Latvian delegation could crown their work for “Delphi”. Their ceremony was frequented by many politicians, scientists and members of the population.

It was not just the Bronze Age architecture which aroused attention, built of logs and thatched with reed, it was especially the installation of the “House of Questions” and the time road which in a very personal way invite to look for traces into ones own history. The message of this “Delphi” partner in Latvia was clear: to emphasise within the framework of Culture 2000 the relations between the Baltic countries and the countries southwards and westwards – One Europe. The cultural transfer was in both directions, which could be illustrated by for example the developments in agriculture and metal working and for example the amber trade. Extra in Araisi is that the explanations concerning the museum and its qualities are now presented in 4 languages: the three Delphi countries and English.