“Delphi” in Archeon: work barn and Grubenhaus from the Carolingian Period 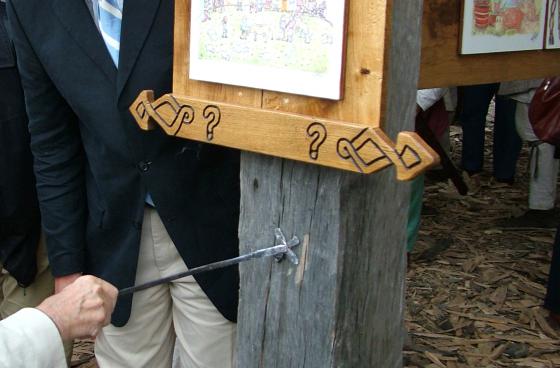 Just 45 minutes south of Amsterdam, at Archeon, on September 1st the last part of “Delphi – house of Questions” was inaugurated by the 3 mayors of respectively Alphen, Valkenburg (ZH) and Rijnsburg. Archeon collected the most important questions in an earlier stage and by the end of June 2005, the construction of two houses was officially given a start.

Within 3 months, one constructed a half open work barn from Valkenburg (ZH), dating back to about 700 AD, locally known as the house of the Woerd. Besides this, a Grubenhaus from Rijnsburg was planned.

In the city centre of Alphen, images of Roman coins are part of the project, as well as a contribution to the website on the Roman Times of Alphen aan den Rijn. After welcoming all the guests, director Jack Veldman, presented the constructions with a slide show and thanked the constructors who did most of the work in old fashioned way.
The Mayor of Alphen, mr. Schoof opened the exposition of the ten most frequently asked questions, written down on plates with original cartoon drawings to make things clear.

An iron poke was heated up and the mayors Van der Lee and Van der Reij set a burn mark on the posts of the grubenhaus which at that time was not ready yet. 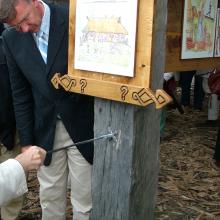