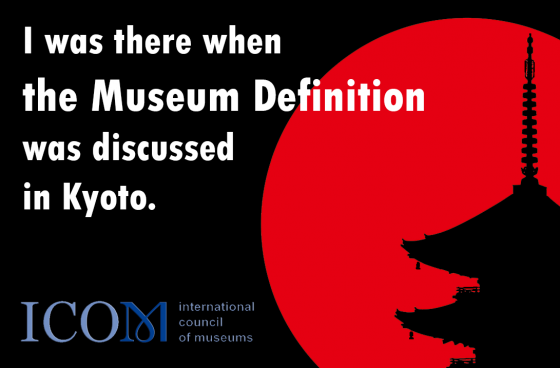 Early September, the triennial General Conference of the International Council of Museums (ICOM) took place in Kyoto (JP). EXARC was present with its director, and one of its members, both from the Netherlands.

The Conference was themed: “museums as cultural hubs, the future of tradition”. As affiliated organisation, EXARC was present at the meetings of the Advisory Council, which covered two days. Main debate was the proposal for a new museum definition; this was not only a description, but also included elements of the envisioned role of museums in society. After long discussion, it was decided that it was too early to decide about this. The coming year will be interesting.

EXARC was also co-organiser of a session, together with ICOM Netherlands (maon sponsor), ICOM Japan, DEMHIST & Japanmusuem Sieboldhuis. The session, by the name “Large Impact by joining Forces” included a keynote by Gail Lord from Canada as well as a paper about the Deshima Archaeological Open-Air Museum in Nagasaki.

We also gave a paper on the use and relevance of archaeological open-air museums in a session by the International Committee for Museums on Archaeology and History (ICMAH) where we met several Japanese colleagues from such museums.

We later made a day excursion to the Hyogo Prefectural Museum of Archaeology and Onaka Archaeological Site Park and on another day to the Heijō Palace in Nara.

For EXARC, attending the General Conference in Kyoto was of great importance and we thank ICOM Netherlands for their assistance. We connected with many museum professionals and have a broader view on museums than ever before.