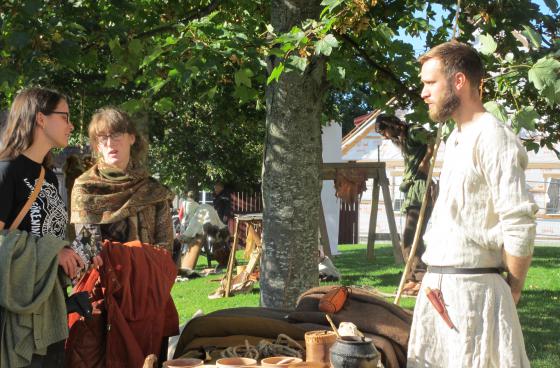 Late September 2017, the 6th Norwegian Forum for Experimental Archaeology took place in Trondheim. It consisted of a three-day program with lectures and workshops on the first two days and a public day on the Saturday. This forum has taken place annually since 2011, EXARC has published reviews of the first two sessions (see below).
This time the program was very international and maybe therefore, the whole conference was in English. Paardekooper from EXARC delivered an introduction into experimental archaeology as the public for this forum was very mixed: of the about 45 people present, many had a living history background. Later papers included themes like iron smelting, music archaeology, Viking ships and a good take on authenticity. An amazing look behind the scenes was planned on the second day, when we had a long and well informed guided tour through the workshops of the Nidaros Domkirkes Restaureringsarbeider (NDR), started in 1869 and still ongoing! Several workshops were given, like on carpentry, bronze bell making and designing of an escape room.
Most of these workshops changed into demonstrations for the Saturday. With absolutely lovely weather many tourists also enjoyed the Viking food, skin tanning, textile reconstruction and much more.
The Norwegian Forum was very well attended and prove to be an excellent opportunity to learn more about experimental archaeology, not only in Norway, but also Scandinavia in general.