Arkaim - The Chariot of Time. Film by Ivan Semyan and Igor Chechushkov

From January 29, the cinemas of the Chelyabinsk region will premiere the popular science film “Arkaim. The Chariot of Time". The viewer will witness whether the team of researchers will be able to build the Sintashta chariot for the first time in 4000 years, recreate the harness, raise chariot horses and conduct real field trials in the expanses of the Ural steppe.

In 1972, during an archaeological survey on the banks of the Sintashta River (Bredinsky district of the Chelyabinsk region), an expedition of Vladimir Gening and Gennady Zdanovich found a unique burial ground. Sensational was the discovery of chariots with spoked wheels. The chariots were harnessed by horses, and horn parts - cheek-pieces - remained from the harness. Near the burial ground, a synchronous fortified settlement of Sintashta was discovered, which amazed the researchers with the level of architectural complexity. In 1987, the famous Arkaim was discovered by Gennady Zdanovich, and a new era began in the study of the Sintashta phenomenon.

The discovery turned the whole scientific world upside down: it became obvious that the ancient Indo-Europeans explored the Urals thousands of years before us. Settled pastoralists of the steppe built large fortified settlements, developed metallurgy and military affairs. And they built the world's first chariots.

The basis of the film "Arkaim. The Chariot of Time” was the start of an unprecedented experiment by Ivan Semyan (EXARC Member), head of the Laboratory of Experimental Archeology “Archaeos” (South Ural State University), a specialist in military affairs of the Sintashta culture, and his colleague, a specialist in ancient harness and chariots, PhD Igor Chechushkov – the creation of a working authentic model of the Sintashta chariot and its full-fledged field tests. To implement an ambitious project, a team of the best masters of traditional and ancient technologies gathered: engineers, carpenters, bone carvers, tanners, hippologists.

The film was created with the support of the Governor and the Government of the Chelyabinsk Region, the UGC and the 2020 Social, Cultural and Educational Initiatives Fund. 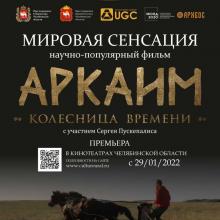 Arkaim - The Chariot of Time.