As one of 2019 EXARC Twinning projects, we - Claus Kropp (DE) and Brendan O’Neill (IE) - have been forging ahead with our investigation of “Early Medieval ploughing implements and their detailed experimental archaeological (re)construction, use, testing and recording”. To date, we have completed a number of phases, including a review of the extant published material, reconstruction of an ard share, analysis of experimental collections and initial testing of plough construction models.

In order to reconstruct the iron components of this plough it was essential to get the correct raw materials. The first of these was iron, which in early medieval Ireland was predominantly iron ore from wetland bog sites; known generally as ‘bog ore’. Our samples were hand collected from a Bord na Mona site in Co. Offaly in the midlands of Ireland. This material was subsequently roasted and smelted, using an early medieval-style shaft furnace, at University College Dublin’s (UCD) Centre for Experimental Archaeology and Material Culture (CEAMC) by Brendan O’Neill.

The resulting bloom of iron was then transported to Claus Kropp at Freilichtlabor Lauresham in Lorsch, Germany where it was further processed by blacksmithing specialist Frank Tommer and his team. Their hard work and determination paid off with the creation of a beautiful ard share that is now being used in our initial plough tests.

The first series of plough tests was dedicated to the question of shape and angle of the wooden plough parts (beam, stilt) and how to affix the iron-share. After several adjustments we were able to construct a first working version of the plough. This was tested on various soil types with a team of oxen using a forecart and while conducting draft power measurements.

Future experiments will be dedicated to the question of other possible designs of the wooden plough parts and also the way the ard is attached to the team of oxen. At least one design is planned in which the ard is directly connected to the yoke. 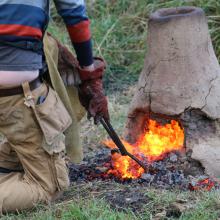 The material was subsequently roasted… 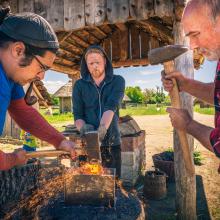 The material was further processed by… 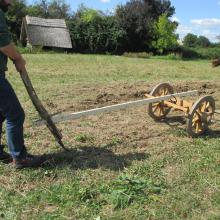